The Camp of the Saints 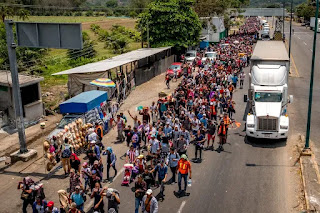 Steve Sailer calls it the March to Re-elect Trump.


For five days now hundreds of Central Americans — children, women, and men, most of them from Honduras — have boldly crossed immigration checkpoints, military bases, and police in a desperate, sometimes chaotic march toward the United States. Despite their being in Mexico without authorization, no one has made any effort to stop them.
Organized by a group of volunteers called Pueblos Sin Fronteras, or People Without Borders, the caravan is intended to help migrants safely reach the United States, bypassing not only authorities who would seek to deport them, but gangs and cartels who are known to assault vulnerable migrants.

Is anybody funding Pueblos Sin Fronteras? That might be an interesting question.


When they get to the US, they hope American authorities will grant them asylum or, for some, be absent when they attempt to cross the border illegally. More likely is that it will set up an enormous challenge to the Trump administration’s immigration policies and its ability to deal with an organized group of migrants numbering in the hundreds.

I hope American authorities will stop them in their tracks and tell them to go to Belize, Mexico, Nicaragua, Costa Rica, or other countries where they won't have to learn a new language and the culture is much more amenable to their ethnography.

Guatemala, Honduras and El Salvador are tragic, insufferable places that can't govern themselves. Their quasi-fascist militaries can't do it. The imperialists around whose holdings all these borders got drawn around are gone. The Catholic bishops in Central America are silent about all the natural conservatives leaving their dioceses to get away from all the other natural conservatives and apparently hope they make it north to go be somebody else's problem.

The alternatives at this point are to either let these people stew in their failing countries there or have them stew in dreary apartment complexes or trailer parks here, where they can provide cheap labor and customers for social media and the title pawn industry. In a few years, we can start giving them student loans. Realtors, who make a good living turning over school districts, will get a shot in the arm.

Personally, I think it's time for my Modest Proposal of selling countries to billionaires and telling them they have to run them. After all, they already own numerous, influential non-profits and government bonds.