What is 'Bitcoin Mining'
Bitcoin mining is the process by which transactions are verified and added to the public ledger, known as the block chain, and also the means through which new bitcoin are released. Anyone with access to the internet and suitable hardware can participate in mining. The mining process involves compiling recent transactions into blocks and trying to solve a computationally difficult puzzle. The participant who first solves the puzzle gets to place the next block on the block chain and claim the rewards. The rewards, which incentivize mining, are both the transaction fees associated with the transactions compiled in the block as well as newly released bitcoin. (Related: How Does Bitcoin Mining Work?)

BREAKING DOWN 'Bitcoin Mining'
The amount of new bitcoin released with each mined block is called the block reward. The block reward is halved every 210,000 blocks, or roughly every 4 years. The block reward started at 50 in 2009, is now 25 in 2014, and will continue to decrease. This diminishing block reward will result in a total release of bitcoin that approaches 21 million.

How hard are the puzzles involved in mining? Well, that depends on how much effort is being put into mining across the network. The difficulty of the mining can be adjusted, and is adjusted by the protocol every 2016 blocks, or roughly every 2 weeks. The difficulty adjusts itself with the aim of keeping the rate of block discovery constant. Thus if more computational power is employed in mining, then the difficulty will adjust upwards to make mining harder. And if computational power is taken off of the network, the opposite happens. The difficulty adjusts downward to make mining easier.

In the earliest days of Bitcoin, mining was done with CPUs from normal desktop computers. Graphics cards, or graphics processing units (GPUs), are more effective at mining than CPUs and as Bitcoin gained popularity, GPUs became dominant. Eventually, hardware known as an ASIC, which stands for Application-Specific Integrated Circuit, was designed specifically for mining bitcoin. The first ones were released in 2013 and have been improved upon since, with more efficient designs coming to market. Mining is competitive and today can only be done profitably with the latest ASICs. When using CPUs, GPUs, or even the older ASICs, the cost of energy consumption is greater than the revenue generated. 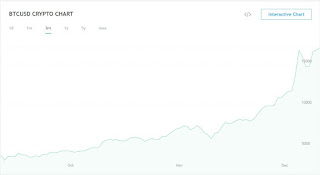 I want to know if anybody has bought a car for 1 Bitcoin–maybe this is happening. Like Tyler Cowen says, the valuation seems to be a Mobius strip: Bitcoin is valuable because a lot of people think it's valuable.

What makes money valuable? The Austrians say its anticipated purchasing power, from which they conclude that only commodities originally valued for their own sake can function sustainably as money. This doesn’t seem right, since fiat money seems to function just fine for the foreseeable future, or maybe that’s just normalcy bias. I’ve also read the explanation that fiat money is backed by all the goods and services available for exchange, which strikes me as a way of saying it’s backed by the ability of market actors to compel its use as tender. Does Bitcoin have this ability and to what extent? The technology is way over my head, but my dim understanding is the relative scarcity is ironclad and the units are portable and divisible. Is it durable? Where do the bitcoins “exist” and can they be taken out with a well-placed EM pulse or hack? Or maybe they’re too diffuse for this to happen. If I print the code out on a piece of paper can I take my sheaf of papers to Publix and trade them for groceries?

Fundamentally, if all you end up with is a square of Python code derived from an increasingly difficult and eventually insoluble set of equations, then Bitcoin seems to be just a competing fiat currency. And if that’s the case, is Bitcoin a bet that the dollar will crash spectacularly–i.e., that the ability of the USG to compel the dollar’s acceptance as market tender will be severely curtailed? What are the odds on that bet? Pretty long from what I can see. I guess we’ll find out when we find out.

Anyway, the number of question marks probably indicates that at my level I have no business buying Bitcoin. So I’ll just resume standing by the side of the road here with my cardboard sign: “Will work for food.”

Rex Squiggly said…
I adhere more or less to Zippy's account here: https://zippycatholic.wordpress.com/2015/10/26/fiat-dollars-explained/ . As a consequence, I think the bitcoin situation is like you say; it's valuable to the extent people believe it is. Of course, the kind of financial realism outlined at Zippy's suggests that at least some of the price of gold, e.g., is overvalued in precisely the same way. So this doesn't tell us much about short-term investment, except perhaps as a conservative heuristic not to bet the farm on something that doesn't actually entitle you to anything of capital-R Real value.
December 13, 2017 at 11:42 AM

Anonymous said…
I concur with Zippy's account. Taxation is the floor under demand for fiat currency.
December 13, 2017 at 7:02 PM

C. Wingate said…
The floor under Bitcoin is people's fear of fiat currency, but when it comes down to it, that's probably an extremely low floor. Right now it's pure tulip land.