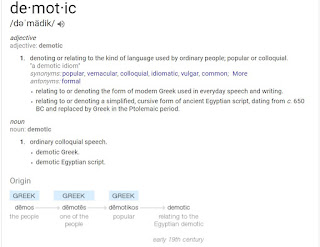 A comment on Marginal Revolution got me thinking about this. The OP talks about nurturing entrepeneurship, and the linked comment chimes in on government funding:


Of course, government funding–such as NSF grants– as a source of innovation are not popular to the more libertarian minded who focus on the “gov’ment “rgulation” as the impediment.

But, if we continue to cut back on government funded research and develop, and then later get surprised that innovation and entrepreneurial activity using this work declines, well, we get what we didn’t pay for and what we deserve.


I have a lot of issues with this. Public funding is like the quantum observer: its very existence distorts the market. Would cancer research end if the public funds dried up? I suppose quantum physics would take a hit, but is it socially just to tax people so a few geniuses can pursue such arcane areas? Silicon Valley and Wall Street have enormous amounts of wealth piled up by brilliant people. Let the quantum physicists make their pitch to them. And governments, like oligopolistic corporations, have their own agendas. The public sector is not going to fund research that reveals there's very little that government can do about a certain problem, just like a corporation is not going to fund research that shows its product is literally killing people.

On the other hand, there’s an odd demotic trend among modern merchant class-elites (who are THE elites at this point) that undercuts my thesis. Formerly, aristocrats derived prestige from subsidizing intellectuals and high culture. The current elites don’t seem to think along those lines. Museums and orchestras are perennially broke, even as the people you would think care about such things are accruing enormous wealth. But they can't even get the more broad-based, populist things right either. Facebook is devoting lots of money to getting Africans more access to Facebook, which would increase the company’s eyeball-count and its founders’ already obscene wealth, but doesn’t address more basic (and life-changing) advances, like potable water and functioning sewers.

There really is a lot of low-hanging fruit still to pick in development economics. But things like municipal water systems and sewage treatment don't seem to attract nearly the enthusiasm as making sure the Third World can post on social media and learn how to emigrate from the Third World. I've written before about the billions of dollars and thousands of NGO employees lavished on Haitians, who still can't seem to get a functioning sewage treatment plant.

There are a lot of "think tanks" out there funded by wealthy people, but their resident scholars seem content drafting papers to wave around at Congressional hearings and penning an essay in their flagship publication that nobody reads. The conservative think tanks don't seem to do much other than occasionally send a scholar to go trigger protests at lefty campuses and agitate for democracy in low-trust countries. They are unmotivated and appallingly ineffective on the cultural and demographic fronts back home.

The wealthy don't seem to know what to do with their already obscene levels of wealth other than use it to generate more wealth, like lobbying for Open Borders and "free trade" and buying their own media outlets to get the word out. Per my title, the modern elite seem to have a strangely pedestrian vision.

My semi-serious suggestion is that once you notch a billion dollars we just give you a region of the country for life, and after your death to your heirs for life. Then you and yours have to figure out how to nurture the Louis Pasteurs and Michelangelos and Leonardo Da Vincis instead of bribing State actors and rigging the democratic process.
Email Post
Labels: culture idiocracy

Rex Squiggly said…
The biggest distortion, prior to any of this other talk about policy interventions, is the enforcement of intellectual property in the first place. (My opinion is that there are no good arguments for IP in principle, and that the consequentialist arguments don't come close to meeting their burden of proof.) Assuming for the sake of argument that abolishing IP represents a net cost in terms of innovation, I could live with even a substantial amount of direct spending on general R&D in that case.

But the more important part is that IP abolition effects a less-distorted market, as well as demolishing vast concentrations of largely unearned wealth and power, which are currently in the hands of people who are actually hostile to the American Nation. (I'm thinking of Hollywood, Silicon Valley, the record industry, and so on.)

Of course, any politician who proposed such a thing would need to watch his back. (See, e.g., http://www.crazydaysandnights.net/2017/11/blind-item-10-cold-case-payouts.html )

I don't mean to thread-jack your point about the demotist culture of the elite, but you're right about that and there isn't much to add.
November 26, 2017 at 1:59 PM

The Anti-Gnostic said…
Thanks for reading and commenting. I have become pretty much an IP-anarchist as well. And the other issue is why conservatives seem so intent on doing the bidding of institutions that are overtly hostile to any traditionalist values. Actually, you don't have to answer that.
November 26, 2017 at 3:59 PM

You know I'm a big fan of your blog, but I think you missed the mark with this post. In particular this core idea seems off:

"On the other hand, there’s an odd demotic trend among modern merchant class-elites (who are THE elites at this point) that undercuts my thesis. Formerly, aristocrats derived prestige from subsidizing intellectuals and high culture. The current elites don’t seem to think along those lines. Museums and orchestras are perennially broke, even as the people you would think care about such things are accruing enormous wealth. But they can't even get the more broad-based, populist things right either. Facebook is devoting lots of money to getting Africans more access to Facebook, which would increase the company’s eyeball-count and its founders’ already obscene wealth, but doesn’t address more basic (and life-changing) advances, like potable water and functioning sewers."

Yes, you can certainly point to *some* high-profile billionaires who fit your description (and I'll take your word on Zuckerburg, I don't pay much attention to him.) But these same billionaires also fund old-fashioned museums and parks and cultural institutions of all kinds, not to mention glamorous poverty-fighting activities like making sure kids get proper nutrition:

Over the past couple of years I've been to some amazing old money museums and cultural institutions (Getty in LA, Lyric Opera in Chicago) and even this place, which has no business being in northern Michigan, built with supermarket money in Grand Rapids:

All of these places are thriving (if sometimes figuring out how to stay relevant to young people) and depend on ongoing big money donations from the rich.

I wish the rich would all cut off their pet liberal causes, but it is their money and there are plenty of conservatives who are trying to win the battle of ideas with their money (unfortunately for us, old fashioned nationalism just isn't that popular with the moneyed set right now -- but we still manage to put up a good fight!)
November 27, 2017 at 10:48 AM

ia said…
The artist Richard Prince was successfully sued by professional photographer for using his images without permission. Prince's failed defense was that the photographer wasn't an artist and therefore he, Prince, who was an artist because the arts establishment said so, coud take what he wanted and profit from another person's work.