The spirit of Vatican II marches on, with +Francis now calling for a re-examination of priestly celibacy. The doctrine is not of itself the real controversy. After all, the Orthodox allow priests to marry with some important qualifications: a priest cannot marry after ordination, and bishops must be celibate. A good illustration of the twin dignity of both sacraments is the person of Antiochian bishop +John. 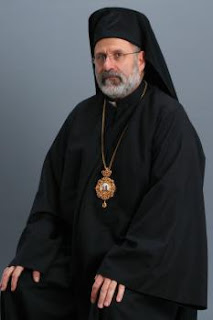 A priest married for 33 years, he was elevated to bishop after the repose of his wife. He now carries the Church in his person and cannot remarry.

The problem is, again, not the new doctrine being explored but the fact of the exploration. This has come up before, on the issue of lay divorce and remarriage, and was previously commented upon by Catholic writer John Zmirak:


It's essential to understand the stakes:
No Marriage, No Infallibility, No Papacy, No Catholic Church
- If no subject is "taboo", the authority of Bishops is not taboo either

No, don't expect any insane theory, or a "heretical pope" argument, to salvage this. If the Pope endorses polygamy, including in its spread-out format as any kind of legitimacy of the "remarriage" of "divorced" individuals, with the redefinition of the dogmatic theology of one of the seven Sacraments, then Trent, Vatican I, and the entire edifice of Catholic claims of authority fall with it. Catholic claims on the absolutely indissoluble Sacrament of Matrimony (1), from which spring forth the children who are Baptized (2), Confirmed (3), Ordained (4), hear confessions (5), celebrate Mass (6), confer Extreme Unction (7), and marry new couples (1 once again) are dogmatically strong and at the same time systematically fragile. They fall down, and the Papacy as it has always been understood falls with it. [From Rorate Caeli.]

So, if the Catholic understanding concerning the sacraments of priesthood and marriage becomes malleable once enough bishops disagree with it, then Synods aren't discerning eternal Truth guided by the Holy Spirit. They're just secular policy-making bodies with no more theological and thus ecclesial authority than a parish book club. Or, in another context, no more authority than the Parish Life Conference recently attended by several Orthodox Patriarchs. Or than me.

In other words, the Catholic Church is becoming not so much hierarchical as episcopal, which means it will become Episcopal. The geography is important as well: Rome is becoming a Global South Church. Catholics like Ross Douthat banking on the Global South to save the institution are going to be disappointed. And as with The Episcopal Church, the crack-up (which I should add I consider probable, and not certain) will be bitter indeed. Our good friend Porter is even less optimistic.

The Anti-Gnostic said…
I would be repeating myself: change the people, change the place.
November 9, 2017 at 8:23 AM

Anonymous said…
For what it's worth, even in the Latin rite the Catholic Church has always granted occasional exceptions to the general rule on priestly celibacy- nowadays, these are typically converted former Anglican priests- and Eastern Rite Catholics mostly follow the same rules as the Orthodox. You're right that it's an issue of authority and hierarchy, though- a major decision like that isn't something to leave up to some local synod with who-know-what ulterior agendas. As is typical since Vatican II, the choice will be quietly made by a closed clique of the bishops' senior staff members, after only a bare pretense of honest debate and discussion (any results of which they will totally ignore).

I'm no theologian, but I wouldn't be terribly shocked to see Pope Francis posthumously suffer a similar fate as Honorius I before the century is out. It seems like he's a prison warden who's so friendly with the gang leaders that he lets them run the place, and rarely sends backup to his officers when they need it- a leader who barely leads. Well, as always, it's up to our prayers and God's mercy.
November 30, 2017 at 12:01 PM