Why Capt. Villanueva had to apologize


I've bestirred myself to write on the current NFL mess.

Out of all this, an NFL player and Army veteran named Alejandro Villanueva is the only one who's had to apologize for his behavior. Here's the Wiki entry on his military career:


After graduating from the United States Military Academy Villanueva was commissioned into the United States Army on May 22, 2010 as a second lieutenant in the Infantry.[5] Directly after being commissioned he attended various military schools, including the Infantry, Airborne and Ranger Schools; all located at Fort Benning, Georgia. After completing the three courses he was assigned to the 10th Mountain Division at Fort Drum, New York. It was with the 10th Mountain Division he deployed for the first time for 12 months to Afghanistan in support of Operation Enduring Freedom - Afghanistan as a rifle platoon leader.[5] As a result of his actions during this deployment he was awarded a Bronze Star Medal with "V" device for rescuing wounded soldiers while under enemy fire.[5] When he returned from his deployment, he was reassigned as a company executive officer.[5]

Villanueva volunteered for the 75th Ranger Regiment's Ranger Orientation Program in 2013.[5] He was assigned to the 1st Ranger Battalion. His roles within the Battalion have included plans officer, platoon leader, and company executive officer.[5]

He has deployed two more times to Afghanistan for a total of eight months between both deployments.[5]


Solid, right? Here he is apologizing for leaving the locker room and standing respectfully with his hand over his heart as the US anthem was played:

Remember the Martin-Incognito dust-up I wrote about four years ago? Goggle-eyed sports fans were shocked, shocked! at Incognito's effrontery toward a teammate. But that’s just life among platoons of big, violent men. Whitey-white-white Peyton Manning and the not-terribly athletic Irish Catholic Brian Finneran negotiated the culture successfully. You hang with the bros, or you really will hang.

Football players have to depend on each other for, among other things, deterring an opponent's potentially career-ending cheap shot by threat of violent retaliation from your comrades. So when the majorities in the locker rooms voted for BLM, the owners ignored their own operations manual and pivoted to the locker rooms, and so did the white quarterbacks and linemen. Majority rule, and enlightened self-interest.

And that’s why Capt. Villanueva apologized.

This is actually a pretty big deal. As Steve Sailer explains, the hidden theme in American football's unscripted drama is defense and capture of territory, and we passionately support the physical exploits of "our" young men against "their" young men. Americans love these pageants because they demonstrate national solidarity despite deep-rooted racial and cultural differences--we fight for you, because you fight for us! Not surprisingly, the US military enthusiastically joins in the pageantry, with color guards and fly-overs and lavish recruiting ads.

Athletic events channel powerful tribal instincts into non-destructive outlets, but this gets kind of awkward when you have different tribes. 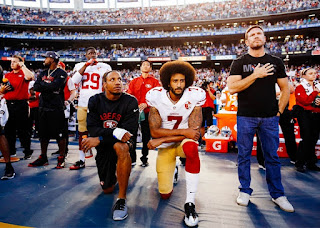 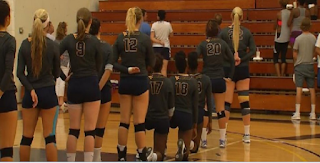