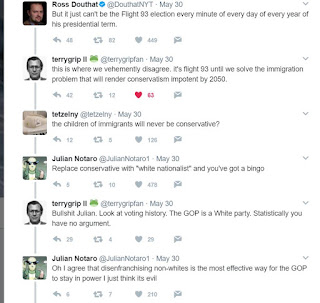 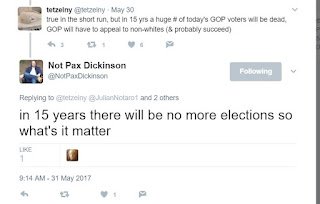 Commenter Bert asked for thoughts on Year Zero, Anno Trump. My first thought is gratitude to the States of Wisconsin, Ohio, Michigan and Pennsylvania. Otherwise it would be Justice Sista Souljah and Attorney General Sally Yates cementing a dry-foot/dry-foot immigration policy into the law of the land, and "hate speech" getting carved out of the First Amendment and "assault weapons" out of the Second. Also, theater-level warfare in the Middle East to save the children from the chlorine barrel bombs.

By the way, there is no such thing as a chlorine barrel bomb. If the Syrian government wanted to make cheap, homemade bombs to terrorize their populace, they'd just combine gasoline and styrofoam in 50-gallon drums to make napalm, attach a fuse, and roll them out of helicopters. Chlorine is noxious, comparatively expensive, and much more unpleasant for your unmotivated conscript troops to handle.

Getting back to Trump, I really wish he'd be more Trump-ian, but with the entire media, bureaucracy and much of his own party arrayed against him I'm not sure there's that much he can accomplish. I'm told the Republican Party has majorities in both the House and Senate but I've seen no evidence of this. For now, I think Trump is doing the best he can on his agenda.

One area of disappointment is foreign policy, but I think he's hedged in by decisions made back to post-World War Two. Jews wield a lot of influence in American society, and a New York real estate developer would be especially sensitive to this. The Sunnis have made their peace with Israel but the Shia have not, so Trump aligns with the Sunni pole. A commenter at iSteve offers the following realpolitik analysis:

To his credit Trump is certainly “putting America first”. Whether it is really in America’s long term interest to buddy up to Saudi Arabia and alienate the Europeans is a different question. The funny thing is that Trump is actually executing the pivot towards Asia that the Obama team kept talking about but couldn’t really pull off.

Trump’s foreign policy moves make no sense if he were really a “white nationalist” but make a lot of sense if he and his team are cynical realists who see the world this way:

1. China is clearly the next world power.
2. Europe is in terminal decline, and the EU is doomed to failure
3. Russia will remain a strong regional player but has no hope of regaining superpower status and becoming an equal player with China and the US.
4. China’s Achilles heel is energy. Controlling energy resources will keep the US dominant for the foreseeable future.

If you accept those premises than Trump’s seemingly crazy actions all makes sense. It makes sense to cozy up to Saudi Arabia and Russia in order to keep them out of Chinese orbit. It also makes sense to cut Europe loose in order to strengthen ties with Russia.. If you need Erdogan to help keep order in the Middle East and watch Saudi Arabia’s flank, then you make friends with Erdogan and let him continue to blackmail Europeans with refugees and to fund Islamic cells throughout Germany.

This suggests Trump has really been a great power conservative all along, which is probably why the military seems to be solidly behind him. If true then Trump is going to disappoint idealists – both leftists who want the US to stand for human rights and “progressive” values, as well as white nationalists and fundamentalist Christians who want the US to stand up for “traditional” values.

I like especially that Trump consigned the horrid Trans-Pacific Partnership Agreement to Hell, and rescinded Obama's pointless signing of the Paris Accord. The optics are fantastic: America First! But with respect to the Middle East, Trump is trapped in convention: Israel must be the strongest power in the region, Iran and Shia Islam threaten that status, therefore Iran and its allies (including Russia) are the perennial enemy. This aligns us with the odious Wahabbists.

In the long run of course, the US has too much debt, too many restive, resentful ethnic minorities, and half the white people hate the other half and wish they were dead. Trump is either the next-to-last or next-to-next-to-last President of the US as presently constituted.

In case you're wondering about the title, here's the first post in "Political Science 101."

Bumbling American said…
“Where you come from is gone, where you thought you were going to was never there, and where you are is no good unless you can get away from it." -- Donald Trump, second inaugural address
June 7, 2017 at 10:32 PM

The Anti-Gnostic said…
"Therefore, I am grabbing the levers of State power while there is still something left to grab, and am appointing my children as hereditary viceroys of the South, Mid-Atlantic, Midwest, and Upper Midwest."

The Anti-Gnostic said…
Luke Daxon - I clicked the wrong button dopily browshing thru published comments. Sorry about that.
June 15, 2017 at 6:25 PM