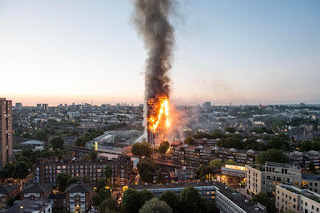 Twenty-four stories of public housing erupted into a Roman candle on Wednesday, as sacrifice to the Great God Equality, who decrees that impoverished Third World immigrants must be vertically housed in some of the most expensive real estate on Earth. The tower was built with public funds in the awful 1970's, from the same Satanic mindset which built Cabrini-Green.

Cash-starved municipalities in the U.S. figured out some time ago that it is much more lucrative to tear down these vertical cesspools and give the tenants Section 8 vouchers to go be somebody else's problem. Britain, still in thrall to post-World War egalitarianism, has not yet deduced that salutary measures to eliminate poverty in expensive cities would include encouraging the impoverished to move to less expensive cities.

This cheap relic should have been torn down long ago of course. But with an endless flood of Third Worlders desperate to live in the lap of social democratic milk-and-honey, the local council thought it could slap on some cladding and hey presto, everybody gets a bourgeois, British lifestyle!

The cladding was apparently an aluminum composite product with a polyethyene core. Polyethylene burns hot and beautifully, enough to melt the rebar inside of concrete. 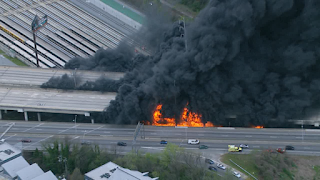 The cladding also enabled chimneying for red-hot gases to race up the exterior of the building. And there were probably a lot of free-standing propane stoves favored by people trying to avoid a utility bill, which would explain the blue flame in units reported by residents. And of course the local council has neither the incentive nor the resources to retrofit this monument of Peak Boomer democratic socialism to current industry standards. 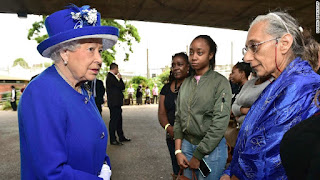 Fix it!
So much to deconstruct here, I can't even. We can start with the unchecked movement of immigrants into this small North Sea island. (If anybody has any luck finding actual numbers, let me know.) London is a center of global capital and expensive even for the natives. Why move barely afloat, net tax-consuming immigrants there?

Welfare is hopelessly dystopic. Has anybody ever made it work? Greenfell Tower is owned and managed by local government with no pricing signals, no profit-and-loss discipline at all.

Great Britain, like every place else in the Anglosphere, is printing money to keep its debt marketable, distorting the cone of production and incentivizing crap products, crap workmanship, and a race-to-the-bottom by producers. This is rampant in all sectors.

The over-arching tragedy is how little difference our beneficent One World vision will all make in the end. The teeming Global South masses will die by fire, violence, and neglect in the ruins of Western capitals as readily as in the urban fever-swamps of their homelands. And all the current virtue-signalling by Occidental social democrats will have been for naught.
Email Post
Labels: death of the west immigration scale