The First and Greatest Commandment


"Thou shalt not be Hitler!"

CNN even follows that phrasing: "First rule of politics: never compare anything to Hitler"

This new rule is going to be pretty hard to follow, given how often I've heard "literally Hitler!" over the past year.

Anglospheric Loki has an interesting take on this: 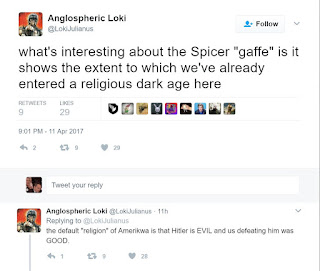 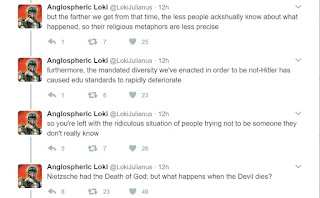 To reiterate, the first and greatest commandment of the new Anti-Religion is, "Thou shalt not be Hitler!" But since education is increasingly about things other than actual history and critical thinking, we know less and less about the real Adolf Hitler: who he was, where he came from, what he actually did, and his historical and social context. No less an educated man of the world than the President's press secretary is as in the dark about literally Hitler! as anybody. So when he says not even Hitler used chemical weapons (and he didn't, no more than our legal gas chambers constituted use of chemical weapons), the High Priests of the Anti-Religion can roll out their "Don't-Be-Hitler" standard and conduct an Auto da Fe.

Sean Spicer is obviously about as not-Hitler as you can be, an amiable WASP in a bureaucratic job with a wife and two kids and probably many Jewish acquaintances. But then he tosses out a remark that implies Bashar Assad is worse than Hitler, which is impossible because as we all know, Hitler is the Absolute Zero of Evil. There can be no worse Evil than the Hitler we all must not-Be. To imply otherwise is literally Hitler!
Email Post
Labels: Amerikwa culture political correctness makes you stupid politics

The Anti-Gnostic said…
I think it would be premature. He's three months in to a four year term.

The Anti-Gnostic said…
Z-man posted something. I'll follow up on it.

Twarog said…
For some reason, I can't help but think of of a line from one of my favorite books, "Non Campus Mentis: World History According to College Students":

Anonymous said…
On the Shavuot weekend it is sad to read of some group purporting to issue Commandmants.