Why I don't feel bad for Charles Murray


Charles Murray attempted to give a talk at a place called Middlebury College, and got chased out by a mob. Murray, as this corner of the Internet knows, was the co-author of "The Bell Curve", in which the authors point out that there are different IQ distributions for different racial and ethnic groups, and that high IQ is correlated with better life outcomes. This is an appalling hatefact, because it leads to the conclusion that all men are not, in fact, created equal and government efforts to make them so are unjust and uneconomic.

Why do conservatives do this? They go to a riot and expect a debate to break out. Murray was also particularly venomous in denouncing Donald Trump, who was the only candidate promoting policies to protect the American prole class, a group whom Murray purports to champion. 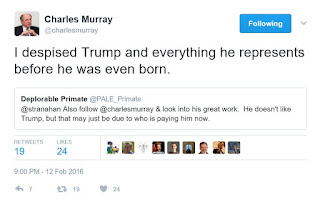 Murray has forgotten an ancient formula: every political regime requires Ideas and the Muscle to immanentize it.

Ideological conservatives have spent the past several decades pretending they didn’t need Muscle. That’s how I used to think: the cogency, the elegance of my Ideas will carry the day! Not true. No amount of argumentation or even data will convince a liberal that all children are not equally educable. No parade of historical, real world-failures will convince a Marxist that the labor theory of value does not describe reality. So if you want a country where you can politely debate Enlightenment concepts like inalienable rights, then you need (1) a territory, (2) a people with the IQ and time preference necessary for abstract ideas and a temperamental aversion to violence, and (3) lots of razor wire and machine gun emplacements to keep out all the people who can out-thug, out-breed and out-vote you. Sometimes you are going to lose this fight, which is what the former Byzantine Christians in the Middle East found out.

Murray has the typical ideologue’s conceit: he thinks his lofty ideas built America and sustain it. That is only partially true. America was built by ornery Anglo-Celts and defended by two oceans and weak neighbors north and south. Since the 1980's Murray, George Will, and all the other polite conservatives who grew up in 88% white America soothingly told everyone that inside every immigrant was a Republican-voting WASP just waiting to get out. Donald Trump has a much more realistic view of human nature and he is in effect asking the conservative elite just what the hell they’ve been doing for the past twenty years.

Trump is like the boss who storms into the shop where everybody’s sitting around smoking cigarettes and talking on the phone. “What are you doing? Get to work! Conserve!" Murray’s the grumbling shop steward fighting the new reality.
Email Post
Labels: angry white guys blood and soil politics war by other means

Quicksilver75 said…
Amen. Well argued. Have more than a few Charles Murray types in my circle, and their fatal mistake was not coming to terms with the extent of leftist malevolence within the media-edu complex post WW2, and its intensifying since 1995. Their knee jerk reaction to Trump was not, "Thank god we got someone unapologetic in our corner who can push back against the Hive and give us a chance to save the country"

Rather, it was "!!! So gauche, so frightfully declasse & narcissistic. What a vulgarian, etc." Their position seems to boil down to: we'd rather lose with manners & our genteel graces intact than go along with this lout who personifies bad taste.
March 5, 2017 at 4:08 PM

Quicksilver75 said…
Murray's full account is worth reading-
http://www.aei.org/publication/reflections-on-the-revolution-in-middlebury/
but I don't think it constitutes a full eye opening red pill for him.
If he or similar were to return to a campus, 2 Security guards would not suffice.
Would need at least 6: 4 to form a protective ring, and 2 roaming ahead to clear a path with truncheon swings. Places like Middlebury are becoming beach heads of Chavez style 3rd world banana republics.
March 5, 2017 at 7:06 PM

Unknown said…
This touches on what the Buckleyite conservative movement has been all about: intellectual pretension and the superior value of ideas over reality. The raison d'etre of the National Review crowd has always been to make conservative theories respectable in Georgetown and Manhattan and to gain status for those who push them; the actual people of the country provide the scenery, but they are not the actors even in a supporting role. The show really isn't about them, as the smirking weasel Kristol showed when he urged the replacement of the white working class to boost GDP.

This play has followed the sorry course that might have been predicted. The well-heeled liberal was never won over, no matter how much the professional conservatives dressed up their goods, even to the point of becoming liberals themselves. Outside, the carrion birds are gathering over the carcass of the social order.
March 6, 2017 at 12:22 PM

Bluefin Tuna said…
"If he or similar were to return to a campus, 2 Security guards would not suffice. Would need at least 6: 4 to form a protective ring, and 2 roaming ahead to clear a path with truncheon swings."

Or book a nearby off-campus location. Outside of school campuses and courtrooms, Vermont has no restrictions on concealed or open carry of deadly weapons. Murray could waltz in alone with a .45 on his hip, permit-free, and they'd be very careful not to touch him directly. (And if perchance they did, an elderly man outnumbered and knocked down by a violent mob of healthy 20-year-olds would have a pretty strong self-defense case in court). Since the Middle Ages, universities have always enjoyed flouting the normal rules of society within their own little islands, and claiming immunity from Townie law; why make it any easier for the SJWs by having the event on their school's "turf"?
March 6, 2017 at 4:05 PM

ghostsniper said…
Number 1 should be:
Large quantities of men with high levels of testosterone and moderate or better IQ to implement the other suggestions and above all else, CUT ALL THE FREEBIES AND ENFORCE EXISTING LAWS.

Gordon Scott said…
Quicksilver75 wrote, ". . . not coming to terms with the extent of leftist malevolence within the media-edu complex post WW2, and its intensifying since 1995."

yeah, preach it, brother. One talks to them, and they are all about peaceful and tolerance and all of that crap. But when their side brings the violence, well, they somehow manage to justify it. Nazis! Someone who is really effective with rhetoric can shame them, but only temporarily. Tomorrow it'll be right back to Trump and the Reichstag fire.

One cannot trust them. Even those who claim to be your friends (even though you're a Nazi) will turn on you given pressure from others. As I told one friend (who thinks he is neutral, but isn't) I just assume they want to destroy America and what we hold dear. It is the simplest explanation for their actions. And it allows one to operate with no illusions.