"Scarcity (also called paucity) is the fundamental economic problem of having seemingly unlimited human wants in a world of limited resources. It states that society has insufficient productive resources to fulfill all human wants and needs."

Scarcity is the basis of all economic law. Demand is infinite, supply is finite. Economization is the process of allocating finite supply among infinite demand.

The fictional world of Star Trek has eliminated scarcity. Instead, the citizens of the Federation enjoy Satiety. Everybody has all the air, water, food, shelter, electro-magnetic energy, and medical care they need. The Federation does not issue currency because satiety eliminates the need for monetary pricing to gauge the adequacy of supply or extent of demand. The only economic decision-making left is the purely administrative task of determining where and when to divert the cornucopia of unlimited supply.

But short of Star Trek, we seem to be approaching a level of saturation in goods, one of the effects of which is the growing obsolescence of manual labor and human data entry and recordkeeping. (Human auditing and project management is next.) We already divert people into way more schooling than they need, and support a lot of useless sinecures. The retail interface is slowly automating, which is why everybody you deal with as a customer is generally underpaid, overworked, and either incapable of or prohibited from any executive decision-making or creative thought. After the “name-tag jobs” disappear, what then? We will have millions of people with minimal value on the open labor market.

We already grow enough food to throw tons of it away so we aren’t going to let them starve. Productivity gains are gobbling up what would otherwise be manifesting as monetary inflation from all the transfer payments. This process, we are assured by the Austrian school, can only result in a massive crash and contraction of the economy back to the level supported by prior savings. But fiat money has weathered a long series of busts and come back each time. My father reminds me people were saying the same thing about the dollar when he was young.

So what is this undiscovered country in which we find ourselves? Nobody starves to death in the West unless they are overtaken by alcoholism or drug addiction. Even the Third World is finding the resources, either native or imported, to support an unprecedented population boom. This photograph, to me, is iconic: 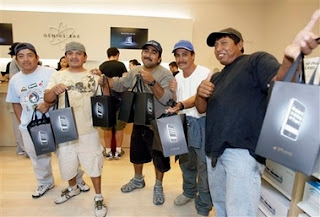 More computing power than the Space Shuttle in the hands of hunter-gatherers. Please don't take this the wrong way: I do not despise these people or begrudge them a single civilizational good. But they literally evolved to fill a specific biological niche in Central and South America, and now they have iPhones.

I got in a furious debate on Twitter about the elimination of food scarcity. Liberals insist that "food insecurity" stalks the land and haunts the waking hours of millions of Americans. This is of course nonsense to anybody with regular contact with the lumpen prole class. Remember St. Michael the Brown? 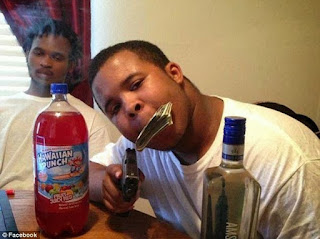 Brown weighed 293 pounds when he was shot by Officer Darren Wilson. To maintain that weight, he required 3,700 calories--about seven Quarter Pounders--a day. He was apparently able to satisfy a portion of his caloric needs by vodka punch. Michael Brown, a feral human with no marketable skills, likely qualified as "food insecure." The modern poor indulge in the sins of the Biblical rich.

Has Scarcity been banished for all practical purposes? Are we now at Satiety? We seemingly can afford to pay young women to have children without the bother of selecting a reliable breadwinner. I’m not sure what the young men are doing but, being men, they generally find something.

I got a lot of feedback on this comment at iSteve and the consensus is no, we have not eliminated scarcity. Humans exist in a fallen state, as the Faith teaches. Demand is insatiable, whether you're Michael Brown or any number of real-life wealthy people accruing more money than they know what to do with.

In the hierarchy of needs, we are well beyond the physiological. 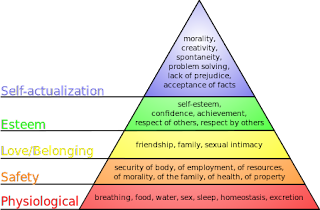 So again, what now? And the answer seemingly playing out before us is that we are in the Soft Times of an eternal cycle. We know evolution results from selection pressures of a harsh environment. Remove those pressures, and K-selected peoples indulge in pseudo-struggles like transgender rights and safe spaces and stop having children. R-selected peoples breed to the point of die-back or into squalor and savagery. Soft People make Hard Times which make Hard People who make, in their turn, Soft Times, until extinction or the energy death of the Universe.

1 The words of the Preacher, the son of David, king in Jerusalem.
2 “Vanity of vanities,” says the Preacher;
“Vanity of vanities, all is vanity.”
3 What profit has a man from all his labor
In which he toils under the sun?
4 One generation passes away, and another generation comes;
But the earth abides forever.
5 The sun also rises, and the sun goes down,
And hastens to the place where it arose.
6 The wind goes toward the south,
And turns around to the north;
The wind whirls about continually,
And comes again on its circuit.
7 All the rivers run into the sea,
Yet the sea is not full;
To the place from which the rivers come,
There they return again.
8 All things are full of labor;
Man cannot express it.
The eye is not satisfied with seeing,
Nor the ear filled with hearing.
9 That which has been is what will be,
That which is done is what will be done,
And there is nothing new under the sun.
10 Is there anything of which it may be said,
“See, this is new”?
It has already been in ancient times before us.
11 There is no remembrance of former things,
Nor will there be any remembrance of things that are to come
By those who will come after.

IA said…
I never saw Wall Street but the 80s art Douglas had on his wall brings back memories. At that time the art market was in a boom phase fueled by corporate buying. Around '90 the bottom fell out. Some had been hyped by the galleries and critics into a kind of tulip mania. Imagine being told by "experts" that your work is really fantastic one day and the next it's junk. Brutal. I think they were the first batch of expendables, the guys about to make it, any day now. Because the top 1% made it into the history books while the bottom 70% or so who didn't sell had nothing to lose anyway. But, those 29%  »emerging" got gut punched really hard. If you don't like art or artists it probably means nothing but most were decent guys who possessed some talent and luck and got sucked into a shit storm. It was worse than say gold miners because you don't aspire to stardom only more gold. It's sucks to be poor in any field but for these rather naive and yeah typically American narcissists it was all quite devastating.

I suspect many college inducted SJWs today are facing somewhat similar psychic trauma. Except instead of a few thousand or tens of thousands of individuals we have tens of millions. They have been brought up to believe they are « emerging » on the right side of history and they are being thwarted by racistbigotsexisthaters who are literally Hitler. But, unlike artists who could at least get a certain amount of personal satisfaction from their work and maybe apply it somewhere else what will these people do?
March 5, 2017 at 5:47 PM

The Anti-Gnostic said…
Sailer has some good observations on this. Young people are building scrupulous resume's to work for non-profits and government agencies.

Your comment reminds me of the Frederick character in Hannah And Her Sisters (circa 1986).

IA said…
It appears the elites have their hands full. It's fascinating because he's trapped with no way out except Israel I suppose::

« People arrive at public schools from a wide range of social locations, and they return to a range that is nearly as wide. The institutional mission is to get them through and into the job market, not to turn them into any particular kind of person. But selective private colleges (which also tend to be a lot smaller than public schools) are in the business of creating a community and, beyond that, a class. “However much diversity Yale’s freshman classes may have,” as one of my students once put it, “its senior classes have far less.”

« And this, I believe, is one of the sources of the new revolt among students of color at elite private colleges and universities. The expectation at those institutions has always been that the newcomers whom they deign to admit to the ranks of the blessed, be they Jews in the 1950s or African Americans today, will assimilate to the ways of the blessed. That they will become, as people say, “more white.” That bargain, as uncomfortable as it has always been, was more readily accepted in the past. For various reasons, it seems that it no longer is. Students of color are telling the whites who surround them, No, we aren’t like you, and what’s more, we don’t want to be like you. »

IA said…
"The institutional mission is to get them through and into the job market,"

Unknown said…
Isn't what is being inflated bubbles, not consumer products, and therefore when bust happens bubbles pop and prices of inflated stocks and whathaveyou crash, but there's no hyperinflation in consumer products. That is not to say dollar doesn't lose purchasing power with time, just that there's no reason for hyperinflation as things currently stand (I know Bob Murphy predicted it off of some wrong assumptions).
While money itself is not evil, the love of money is the root of all kinds of evil. When people lose faith they try to fill their emptiness with material stuff and hedonism, which is satiety which you speak of (it doesn't work of course, no matter how much material stuff you have it cannot fill the spiritual void, and this leads to thirst for annihilation, which is why people go for temporary oblivions, white parties, alcohol, drugs, until at last, they get to suicide).
Yes, we are in the fall of civilization stage, check out this:
http://people.uncw.edu/kozloffm/glubb.pdf
when people lose their faith, and the athlete, the singer and the actor become national heros you know that it's the end.
April 12, 2017 at 11:35 AM