Well, not quite but who cares when there's Lefty hay to be made. By the way, given that Trump is Literally Hitler, shouldn't refugees be screaming to go anywhere but the United States? Refugees should be pouring into Canada and Mexico right now, fleeing Trump's Waffen-SS. 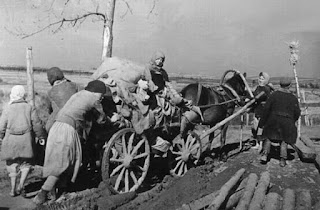 American refugees flee Trump's Waffen-SS
There is the predictable amount of wailing and gnashing of teeth over Trump's latest Executive Order, which essentially bans travel to the U.S. under the visas of seven suspect countries: Iran, Iraq, Libya, Somalia, Sudan, Syria, and Yemen.

Iran has nuclear ambitions, a large espionage network, and a notoriously paranoid and reactionary government. Iraq, Libya, Somalia, Syria, Sudan and Yemen are all in active civil wars and should frankly be quarantined while they sort out whether they are going to be viable states.

Sorry but the “Iraqi translators” and “Iranian grandmothers” and Somalian neurosurgeons don’t move me on this. These are low-trust countries with lots of casual brutality. If you leave here, go there, and then try and come back here I want it to be a real hassle, if not an outright ban.

Of course, Tyler's particular problem shows not a problem with current policy but with how U.S. citizenship is rationed or, more accurately, not rationed. Citizenship is messy because it's not rationed economically. So introduce market incentives: you have to buy citizenship on the open market, or have it gifted to you by your parents. Or the other shareholders get to vote on whether to give you a slice of the pie, like they do in Switzerland. Then it would become apparent that the government inflates the supply of citizenship, and the category of “immigrant” would disappear, replaced by "owners," "guests" and "trespassers." In other words, citizenship is property or it is nothing.

"Citizenship" is another one of those areas where all the free market-economists get squishy.
Email Post
Labels: immigration libertarianism national interests

Theodoric said…
It doesn't even apply to US dual citizens, only to people who are dual citizens of one of the affected countries and another country.
http://legalinsurrection.com/2017/01/most-claims-about-trumps-visa-executive-order-are-false-or-misleading/
January 29, 2017 at 4:48 PM