The Age of Evangelism Is Over, cont.


The congregation at St Mary's cathedral heard the Muslim version of the Virgin Mary's conception of Jesus, from the Koran's Sura 19, sung by Madinah Javed. The passage explains how Mary gave birth after an angel told her God would give her a child.

Muslims believe Jesus was a prophet, and that He was a precursor to Mohammed rather than the Son of God ...

It says: "The congregation was also reminded during the service that it is not only Christians who give honour to Jesus. We were joined by friends from two local Muslim communities." The post also shares a video of the recitation. 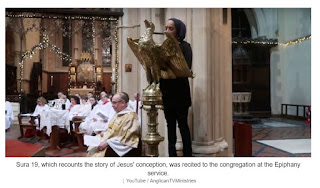 If Christianity is Truth then this is intolerable, and underscores the justification for a Christendom: people need a geographic redoubt in which to be good Christians and protect their children and the simple from error. Certainly Muslims do not hesitate to carve out their own exclusive cultural space. Of course, secular democracy cannot tolerate such a thing past a certain point as it must ultimately lead to collapse of the central state. The Canadian central state with its many-nations policy is going to be in serious trouble eventually, as more of its constituent nations decide to stop paying taxes to fund the other nations.

For now though, we continue our slumber in the happy dream of secularism, and religious sects compete in a highly transparent market (where, for example, a complete English translation of the Koran is a few keystrokes away) for adherents.

The Age of Evangelism is over. I'm not sure what Age comes next (actually I do: Identity) but Christian hierarchs should give this serious and prayerful thought.
Email Post
Labels: blood and soil catholic faith multiculturalism

Anonymous said…
“If Christianity is Truth then this is intolerable, and underscores the justification for a Christendom: people need a geographic redoubt in which to be good Christians and protect their children and the simple from error.”

Competing religions have always had their pissing matches; this controversy only underscores those Christians, Jews, and Muslims who characterize its brethren as “good” and “bad” followers. Thus, the Age of Evangelism trudges onward, as each group tries to save souls by stating how a person ought to approach their faith, as each group works toward salvaging from the ravages of secular democracy. But that is the price of people who pursue individual liberty, the freedom to create for themselves the life they want to lead on this Earth. Ultimately, a higher authority, not some human in cloth or writing on a blog, will render judgement on that individual.
January 16, 2017 at 9:12 AM

The Anti-Gnostic said…
The secular State necessarily takes it a bit further: individuals who create the life they want to lead by fencing thenselves off from secular democratic society will have to be outlawed.

The dynamic at play in the West is tripartite: one side aligns temporarily with another to undermine the third. Thus we see the Atheistic State aligning with Islam (and Judaism) to reduce Christianity's prominence in the public square.
January 16, 2017 at 10:23 AM

Anonymous said…
“The secular State necessarily takes it a bit further: individuals who create the life they want to lead by fencing thenselves off from secular democratic society will have to be outlawed.”

That is a mighty big assumption there. America is littered with mono-religious redoubts and singular ethnic/racial/social havens. This systematic effort to rob them of their liberty is only in the minds of those groups who are deathly concerned with an increasing populace who is more spiritual than religious and who are incorporating Enlightenment ideas into their faith.

“The dynamic at play in the West is tripartite: one side aligns temporarily with another to undermine the third. Thus we see the Atheistic State aligning with Islam (and Judaism) to reduce Christianity's prominence in the public square.”

No, there are four competing sides—the State and each of the three major religions. Everyone has been kicked to the curb and allowed back to join the others in the sandbox at various junctures in world history. Furthermore, victimization is so SJW. The public square was purposely declared off-limits to one dominant religion by the Founding Fathers. Limited exceptions have been made via federal law and through the court system. The Nation that was formed and the State they helped to create ensured that ALL faiths were to be practiced and protected.
January 16, 2017 at 12:17 PM

The Anti-Gnostic said…
Yes, I understand all that. But if the secular State--the most powerful and prominent institution in the US--is going to punctuate all our evangelizing by saying, in effect, it's all relative, then evangelism is a waste of time and money. There is nothing to evangelize about: religion is a purely private matter ("spiritual than religious") and evangelism is just plain bad manners. Now this may be perfectly politic, and is certainly necessary to keep the peace in a multicultural polity, but it is inconsistent with the view that Christianity is Truth. And there is a definite contrast here: Islam is quite bold and up-front about carving out cultural space for itself, while Christians are lectured about the Founding Fathers and the Crusades.

Why do I make an issue of this? Because 1) I don't think secular societies can maintain sustainable birth rates, and I want to see Christianity still standing rather than fatalistic, dystopic religions such as Islam, and 2) I see Christians seemingly hell-bent on losing this fight.
January 16, 2017 at 4:41 PM

Anonymous said…
Evangelists do not fall prey to secularists demanding that beliefs be "relative". Nay, they heed the call of God, for He is King. The waste would be for congregations to remain idle merely because the State is making demands about how they ought to "manage their faith". And you seem unaware that evangelism takes place everyday in America, from group Bible study classes to missionary work. The message of God remains. The nature by which that message is conveyed has changed to fit the times. Some people call it progress. When it comes to Truth, it is a person's religious values they adhere to, regardless if it is Christianity, Judaism, or Islam, in the cultural space they have created at home or in various parts of their community. It is noble that you are concerned about "sustainable (white) birth rates", but the religious and non-religious will make those individual decisions as to have children and to live alongside in peace and harmony amongst themselves.
January 17, 2017 at 10:55 AM

The Anti-Gnostic said…
You found Secular Heaven--sweet! Except you forgot that part where the secularists get out-bred, out-thugged and eventually displaced by the non-secularists.

That's what happened in Syria, when everybody realized the ruling secular Alawites and Christians were out-numbered five to one.

Fortunately, the Wahabbists were too fanatical even for Syrian Sunnis, and a lot of surplus Syrians obligingly left Syria for Jordan, Turkey, Europe and elsewhere. A number of Christians formed militias and fought back, and have reclaimed their villages. Which is the point I'm making: if the Faith is a real thing--the world illumined by Truth as opposed to an incorporeal set of ideas--then Christianity needs a Christendom.
January 18, 2017 at 7:59 PM

Anonymous said…
The religious conundrum in Syria is not even on the same plane as what is happening in America. Now, American Christians are bound by their Faith in God. How they interpret that Faith among themselves and between groups is now the current battleground. It has little to do with taking matters to the streets to mark new territory and remove by force those “dirty heathens”. The fight has been and will continue to be along ideological grounds as what extent to live and operate in the secular world as non-secularists. That is the reality. And American Christians are much more civilized in their approach. They are long past that point of being deathly concerned with popping out kids to be trained as Christian warriors against Jewish and Muslim hellions, of being like Custard in his last stand against the savage secularists. Their Christendom is their congregation and the community they reside in with like-minded fellows. That is their Truth. That is their Faith.
January 19, 2017 at 12:31 PM