All hail the Emperor


1. Protestant Christianity given unabashed priority in the public square. 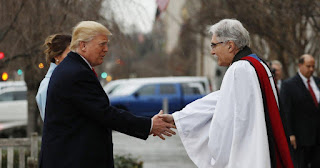 2. Melania Trump is a fine, fine figure of a woman. 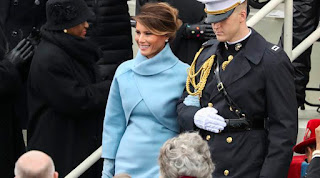 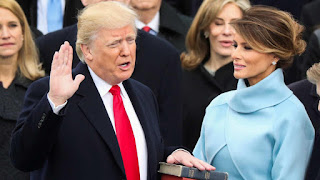 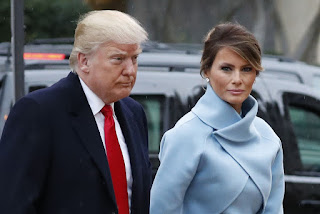 3. Trump's inaugural address was comparatively brief, a little over one-half the word count of Obama's two inaugural speeches, and quite confrontational, essentially telling his predecessor he fiddled while Rome burned.

For too long, a small group in our nation's capital has reaped the rewards of government while the people have bore the cost. Washington flourished, but the people did not share in its wealth. Politicians prospered but the jobs left and the factories closed.
The establishment protected itself, but not the citizens of our country. Their victories have not been your victories. Their triumphs have not been your triumphs. And while they celebrated in our nation's capital, there was little to celebrate for struggling families all across our land.

That all changes starting right here and right now, because this moment is your moment. It belongs to you.

It belongs to everyone gathered here today and everyone watching all across America. This is your day.This is your celebration. And this, the United States of America, is your country.

What truly matters is not which party controls our government, but whether our government is controlled by the people.
January 20th, 2017, will be remembered as the day the people became the rulers of this nation again.

The forgotten men and women of our country will be forgotten no longer. Everyone is listening to you now. You came by the tens of millions to become part of a historic movement, the likes of which the world has never seen before.

At the center of this movement is a crucial conviction that a nation exists to serve its citizens. Americans want great schools for their children, safe neighborhoods for their families and good jobs for themselves.

These are just and reasonable demands of righteous people and a righteous public.

Every decision on trade, on taxes, on immigration, on foreign affairs will be made to benefit American workers and American families. We must protect our borders from the ravages of other countries making our products, stealing our companies and destroying our jobs.

Protection will lead to great prosperity and strength. I will fight for you with every breath in my body. And I will never, ever let you down.

America will start winning again, winning like never before.

We will seek friendship and goodwill with the nations of the world. But we do so with the understanding that it is the right of all nations to put their own interests first. We do not seek to impose our way of life on anyone but rather to let it shine as an example. We will shine for everyone to follow.

Terse, declarative rhetoric. George Will hated it but of course he's a silly little bitch throwing a hissy fit. Read his column at the link if you don't believe me.

4. F. Scott Fitzgerald said, "There are no second acts in American lives." By my reckoning, Donald Trump is on his third. I've never seen anything like it. 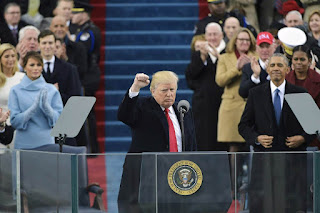 That's not the impression I got when I watched the inauguration with my family yesterday. I couldn't help thinking that pride of place was given to the Jewish rabbi who read from Psalm 137, which given Trump's promise to transfer the American embassy from Tel Aviv to Jerusalem, was obviously code for Zionism. America First or another four years of America playing Israel's Shabbat Goy?
January 21, 2017 at 11:14 AM

Theodoric said…
Wouldn't Protestantism being given a place of priority be a bad thing, from and Orthodox Christian perspective?
January 21, 2017 at 2:59 PM

The Anti-Gnostic said…
Theodoric - yes, but we are a blip in the culture. Pretty much the equivalent of complaining about Catholicism in Italy.

Can you imagine Queen Hill's coronation? We'd be there four hours when they finally get to the Bahai'an clergy.
January 21, 2017 at 3:25 PM