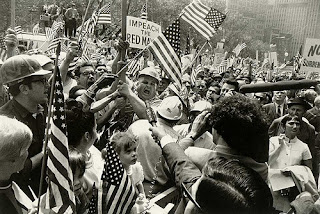 At 7:30 am on May 8, [1970], several hundred anti-war protesters (most of them high school and college students) began holding a memorial at Broad and Wall Streets for the four dead students at Kent State. By late morning, the protesters—now numbering more than a thousand—had moved to the steps of Federal Hall, gathering in front of the statue of George Washington which tops the steps. The protesters demanded an end to the war in Vietnam and Cambodia, the release of political prisoners in the United States, and an end to military-related research on all university campuses.

Some of the construction workers and counter-protesters moved across City Hall Park toward City Hall. They mounted the steps, planted their flags at the top of the steps, then attempted to gain entrance. Police on duty at City Hall initially barred them, but soon the mob pushed past. A few workers entered the building. A postal worker rushed onto the roof of City Hall and raised the American flag there to full mast. When city workers lowered the flag back down to half-mast, a large number of construction workers stormed past the police. Deputy Mayor Richard Aurelio, fearing the building would be overrun by the mob, ordered city workers to raise the flag back to full mast.

Rioting construction workers also attacked buildings near City Hall; most were of Irish Catholic extraction and some ripped the Red Cross and Episcopal Church flags down from a flagpole at nearby Trinity Church. One group invaded two nearby Pace University buildings, smashing lobby windows with clubs and crowbars and beating up students. More than 70 people were injured, including four policemen. Most of the injured required hospital treatment. Six people were arrested.


"Not everything is about an economic theory, right?” Clinton said, kicking off a long, interactive riff with the crowd at a union hall this afternoon.

“If we broke up the big banks tomorrow—and I will if they deserve it, if they pose a systemic risk, I will—would that end racism?”

“No!” the audience yelled back.

Clinton continued to list scenarios, asking: “Would that end sexism? Would that end discrimination against the LGBT community? Would that make people feel more welcoming to immigrants overnight?”

The white working class, which is well represented in the ranks of combat infantry, has a strong patriotic and masculine streak, so when the Democratic Party decided to focus on identity and social justice instead of economic class and labor dynamics, they naturally had to distance themselves from those uncouth Hard Hats. The white working class subsequently elected Ronald Reagan by large electoral majorities.

Forty-six years later, a similar realignment occurs on the Republican side, as prominent conservatives urge their fellows not to vote for Donald Trump. 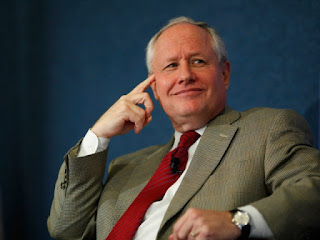 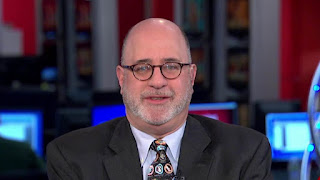 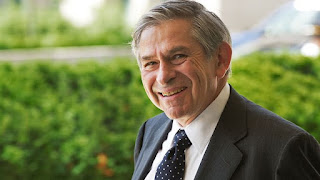 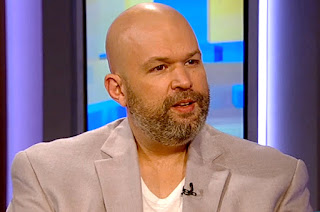 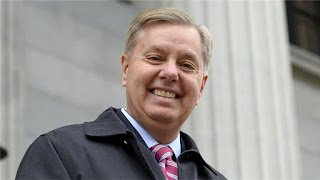 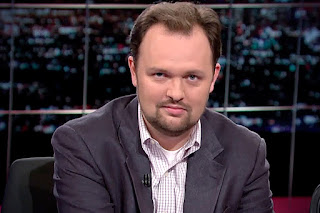 By way of contrast, here is a typical image from Googling "Trump voters". I doubt they contribute to the American Enterprise Institute or read the Weekly Standard. 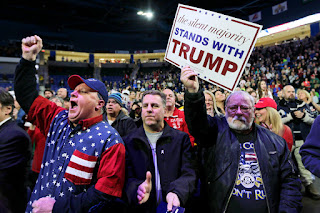 The conservatives accuse Trump and his base of "racism," "sexism," "xenophobia," and even "fascism" (an incoherent use of the term). Trump's voters enthusiastically cheer his "America first" foreign policy, a Wall on the southern border, and a ban on Muslim hijrah. As the primary results demonstrated, more of the Republican base agreed with Trump than with any other approved McCandidate. Tax rates and Original Intent don't seem to figure much in their hierarchy of wants.

The opposition to this populist revolt is like nothing I have seen in my life. All of media, government, business, academe, and the think tank archipelago have declared war on Trump. He is attacked without respite, with the Republican establishment and its donors in the vanguard.

This is the second, seismic political re-alignment in my lifetime. As it turns out, people care less about marginal tax rates and whatever it is the 14th Amendment does not empower government to protect, and more about things like the national character, and the endless wars they are tasked with fighting and financing. They don't want a carried interest exemption; they want a country to call their own, and a strongman who'll keep out their enemies. Any of the Establishment's pre-vetted candidates could have promised that, but they didn't. Trump did, and that's why he's the one running for President.

Conservatism is about conserving a people or it is about nothing, pure and simple.
Email Post
Labels: democracy lindsey graham politics the Stupid Party Trump

DNY said…
No. Conservatism is about conserving the patrimony of our civilization -- in the American context including the American Founding. It really doesn't matter what people keep the flame. American conservatism will have succeeded if in 100 years a nation full of descendants of immigrants of mixed European/Amerindian ancestry from Latin America, and people whose ancestors hail from all the reaches of Asia and Africa, has returned to the ideal of limited government, laws drawn on the Christian conception of morality, economic policy based on free exchange, rather than government direction (whether on behalf of the wealthy or of the poor), and a healthy respect for particularities (see Russell Kirk on the last) including letting the states actually set policy, rather than the Federal judiciary. It will have failed if the "people" have been conserved at the cost of the continued expansion of the omnicompetent state, the destruction or relegation to smaller and smaller areas of influence of the non-state civil society, the Church included, and one-size-fits-all centrally enforced solutions to all problems real or imagined.
November 2, 2016 at 8:55 PM

The Anti-Gnostic said…
The Gnostic ideal: nothing left but transcendent Principle. Maybe you could revive the Shakers.

Conservatives talk constantly about the American Proposition, but overlook the fact that only one ethnic group in human history dreamed up the Proposition and fought for it.

Anonymous said…
Racial thoughts, desire for supremacy and fear together, drive the behavior of anti-Trumpers in the "conservative" party and are beyond the passion against him witnessed in the whole mainstream "right-wing" media.

Yes conservatism is about preserving your heritage, but if you get conservatism controlled by people who see themselves as outsiders and hold said "heritage" in sour disdain, conservatism turns into anti-conservatism.

I don't believe you needed me tell you any of this, still.