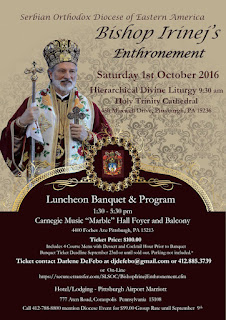 Who are "Serbians?" Presumably, they are an ancestral group with sufficiently high rates of in-group marriage to warrant the ethnic label.

Where is this "Eastern America?" It's actually a heavily populated area which has been settled since the 1600's, whose inhabitants generally consider themselves an integral part of the sovereign and cultural entity called the United States of America. Ninety nine percent of them are not Serbian.

Serbians, like other immigrants, think the USA is terra nova with this common language and legal and other infrastructure just lying around for the rest of the world to pick up when they get here. The fact that there is a distinctive Anglo-America which actually built the place and supplied this social and physical framework is unknown to the new arrivals, thanks in no small part to Anglo-Americans telling them there's never been any such thing as Anglo-America.

The Serbians, the Levantines, the Meso-Americans, the Afghans, and on and on, are not coming here to be here; they are coming here to have a better there. God bless us all, and thanks for the Orthodoxy, but this doesn't end well.

I refer readers back to this post from October 29, 2015, where an Anglo-Saxon Fr. Patrick Allen was tasked with explaining why we're sticking with our Syro-Lebanese, Arabic-speaking fathers in the faith.

We are all in uncharted territory. America, an Anglo-Celt republic, has become a multicultural empire and nobody knows what do now.
Email Post
Labels: anglo-america ecclesiology Orthodoxy

Ed said…
I realize this isn't your point, but I never understood why there wasn't an Orthodox American patriarchate, instead of all these immigrant ghetto branches of the Old World churches.
August 28, 2016 at 10:03 PM

The Anti-Gnostic said…
A nation's Church must reach a certain level of venerability and maturity before the other patriarchates will recognize her as autocephalous. We are a long, long way from this in the United States. There was no agreement early on whether the Orthodox in America would be under the Greek or Russian omophorion, so 200 years later we're still trying to figure this out.

For that matter, the process of autocephaly itself has never been fully worked out. My nascent hypothesis is that autocephaly is "taken" and subsequently recognized, as Moscow did when the Ecumenical Patriarch's See (to which it previously answered) was rendered vacant at one point.

Can autocephaly be granted? The answer seems to be, only if all the other patriarchs agree, which is why nobody recognizes the OCA as autocephalous even though the Moscow Patriarchate purported to grant a tomos of autocephaly in the 1970s.

Click on "Orthodoxy" in my word cloud. It's a dense subject and these are just my superficial rants.