The title was going to be, "Don't want a Reich, don't enable a Weimar."

coverups and inaction for Muslim rape gangs but water cannons for anti-Islam protests this is how you get Hitler pic.twitter.com/VQJyCk6IsL

Germans now live under anarcho-tyranny. When your government outlaws protests against foreign invaders who assault your daughters and sisters, consume the public purse and pollute the commons, then it's no longer your government or your laws. Europeans will either submit to the invaders, who are muscle for the governing elite, or they will explode. Let me repeat that penultimate part in case you missed it: the function of the foreign invaders is to serve as muscle for the governing elite against their own people.

The US problem is more genteel, thanks to flexible labor markets and reserve currency status, but the pressure is building. Malcolm Pollack thinks we are entering a phase shift, as the distance between distinctive and incompatible human population groups shrinks.

I haven't heard the late Stephen Covey's phrase "paradigm shift" in a while, but it needs more use. The US is an Enlightenment-era testament to the power of ideology, but as the Anglo-American stock who dreamed up the ideology shrinks to plurality status, we see the Age of Ideas concomitantly follows. Most Occidentals, still drowsily enjoying the long social democratic nap occasioned by their former super-majority status, have no conception of what's coming. They are perplexed and angry, like petulant children, at the adults shaking them and telling them sleep is no longer possible.

@apurposefulwife And how do you know they are arabs? Im an christian arab and i hope you all die anyways. Fuck whites.

Which brings me to this guy: 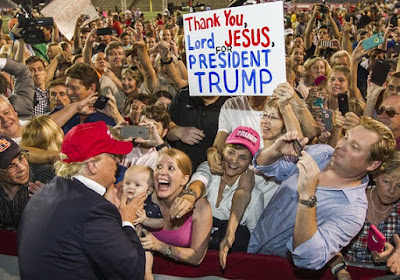 I'll pull no punches here: Trump is appealing to American whites (and a not insignificant number of American blacks and latinos) whose tribal instinct has been triggered by increasingly hostile public debate, increasingly chaotic and violent public spaces, and economic policies which deliberately seek their impoverishment. Bourgeois conservatives who've managed to price themselves away from such unpleasantness cannot believe the proles are no longer motivated by candidates promising low tax rates and cheap stoop labor.

As pluralistic democracy scales up and up, elections are less about What and How, and more about Who and Whom. The State perceives a threat from the Nation in the candidacy of Donald Trump. New ranks and files are forming. Paradigm shift.
Email Post
Labels: anarcho-tyranny angry white guys neo-reaction

nothern refugee said…
Glad to see you are back among the living. To be honest, until the recent pushback in Germany and the US, I had grown too weary to read blog posts, let alone post anything myself. What was the point of documenting the trend if you are powerless to effect the outcome? Recent events give me some hope. The alt right memes are starting to bleed into the mainstream. Also, it looks like another recession is coming. I say that from my vantage point in private industry. I will suffer, But I welcome it. The current edifice is rotten; a few strong shoves might throw it off balance long enough to give us some breathing room.
January 14, 2016 at 12:11 AM

The Anti-Gnostic said…
My parents have been your typical American conservatives, loyal to the institutions, for their whole lives. They are spitting mad over immigration and offshoring. I told my wise father I would be voting for Trump and he looked at me gravely and said, "Oh, you have to."

nothern refugee said…
I too have migrated to twitter. The rise of the twitter alt right is heartening. As with you, my father, a loyal Republican, has completely given up on the party and has moved to the Trump camp. At my work, I interact with a large cross-section of workers, from PhDs to technicians to laborers. Trump is wildly popular with the working class types, and gaining with the more educated. The powers that be have no clue as to the rage out here in the hinterlands. I really, truly cannot believe how distant all the Fox, etc, talking heads are. No one gives a shit about Israel, or taxes, or any of the standard GOP talking points. It is immigration and Islam all the way down. Another deep recession, coupled with continued elite malfeasance, could really cause an explosion. Standard Cuckservatism is a fair weather ideology; it is getting very cold outside now.
January 14, 2016 at 10:56 AM