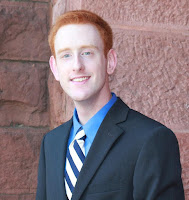 Matthew Heimbach is apparently back in people's sights, for no other reason than that the conscience of a New York grad student weighs heavily upon him in the wake of the Charleston shootings.

The very white Ryan Hunter, whose CV, interests and appearance suggest he is not around a lot of diversity, has declared anathema on Mr. Heimbach.

My conscience obliges me to report to Your Eminence [+Demetrios, GOA] that a white supremacist named Matthew Heimbach, who claims to be a practicing Orthodox Christian, has unfortunately been receiving major media coverage from ABC News in the wake of the recent Charleston shootings. Only yesterday, an article appeared in ABC News in which Heimbach was interviewed while wearing an Orthodox cross. Mr. Heimbach has publicly claimed that the suspected shooter in the Charleston attach is a “victim” of a culture which, supposedly, hates and oppresses white people. Mr. Heimbach has claimed, and continues to claim –falsely– that his racist views somehow are in line with those of Orthodox Christianity. He further claims, despite having been excommunicated for his views by Bishop Anthony of the Antiochian Diocese of Toledo and the Midwest, to be an active Orthodox Christian in good standing. While his constitutional rights to free speech allow him to do this, I and a number of my friends from across Orthodox jurisdictions are greatly concerned that Mr. Heimbach’s views will cause non-Orthodox members of the public to associate the Holy Church with his radical, un-Orthodox views. He is furthermore presenting a false narrative, claiming himself to be an active member of the Church when in fact he is excommunicated. I am especially anxious that the memory of your illustrious predecessor Archbishop Iakovos not be profaned by the shameful association of such an ignoble man with Holy Orthodoxy.

Apparently he sent an identical letter to Met. +Joseph of the Antiochian Archdiocese, lest Matt still be lurking in one of his parishes.


Well, wait a minute, phyletism means Bulgarians in Istanbul must answer to the local Greek bishop and not their Bulgarian bishop back home. More broadly, the Church's ecclesiology is local, not ethnic. However, this has never meant that Greeks and Bulgarians are canonically forbidden from drawing lines around themselves and declaring themselves the Greek or Bulgarian nations. That is actually part of the catholicity of Orthodoxy: every Nation gets its own Church. Thus, we have liturgies in the local Romanian, Greek, Russian, etc. forms in these ethnic groups' geographic redoubts.

The canons against phyletism are violated, every day, by the clergy, hierarchs and laity of the OCA, GOA, AOANA, ROCOR and surely some others I am forgetting. There is even a Carpatho-Russian jurisdiction floating around somewhere for, presumably, the remaining ethnic Carpatho-Russians. There is also, apparently, Mayan Orthodoxy: http://www.mayanorthodoxy.com/

And then there are the non-Chalcedonian Churches: the Armenians, Egyptian Copts, Ethiopian Copts, Assyrians; all proudly and persistently ethnic. Heimbach is, like most of us, an Anglo-European mutt, but he is unquestionably part of an American ethno-cultural subgroup which, seemingly, is the only one that cannot be nationalistic.

There are two facts in these debates which don't seem to get much acknowledgment. First, the Church's ecclesiology no longer represents the facts on the ground, where people can pick up and move to other countries when the jobs run out or the bullets start flying. Second, people generally prefer religious worship with their own cultural expressions, which is the very reason there are separate jurisdictions in secular, propositional America. Nor are these issues unique to America; there are problems in the Jerusalem patriarchate, where Greek hierarchs are in conflict with the local Arab culture and peoples, and the ludicrous persistence of "Constantinople" in what is unquestionably Istanbul, the capital of the Turkish nation-state.

Here are some more nuanced thoughts on this topic:

It strikes me that Heimbach is being declared guilty of violating the American secular canon, not the Orthodox one.


This would be an interesting public debate, if people were allowed to debate these issues publicly. But since frank discussion of reality is a hatecrime, nobody can figure out how to reconcile Orthodox ecclesiology with a world where people take their nations with them wherever they go.
Email Post
Labels: ecclesiology multiculturalism Orthodoxy

Unfortunately, your comment, even if it were to be published on his page (unlikely), would fall on deaf ears, as it were. These people are not interested in conversing with the other side, all they want to do is shriek, yell and point fingers at the 'bad guys', while trying to score points with the episcopacy - which, to my knowledge, has done absolutely nothing about this open letter.

I commented on his post too, pointing out some of the errors in his logic, and was swiftly deleted. For a self-identified 'millenial', he doesn't seem at all interested in 'fostering conversation' or whatever it is these people like to do.
July 6, 2015 at 5:28 PM