Overall I was surprised how few of you approached the question the way I have, rather as a group you picked too many nerdy white guys. Now I don’t like to play “the PC card,” and if a process generates a lot of nerdy white guys, I don’t then assume that process is necessarily biased or requiring correction. Still, the fact that my list creates so much room for women (and non-whites) suggests it reflects the universality of human experience more than what most of you came up with.

So, in an effort to improve Tyler's mood, I've put together this list of non-nerdy (quite non-nerdy), non-white (i.e., non-WASP) guys I admire. 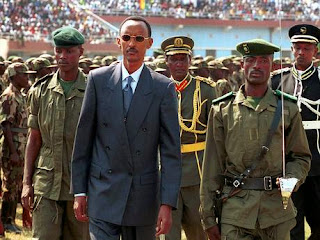 On 6 April 1994, Rwandan President Habyarimana's plane was shot down near Kigali Airport, killing Habyarimana and the President of Burundi, Cyprien Ntaryamira, as well as their entourage and three French crew members.[51][52] It is unknown who carried out the attack. Historian Gérard Prunier, in his book written shortly after the incident, concluded that the shooting of the plane was most likely a coup d'état by extreme Hutu members of Habyarimana's government and was planned as part of the genocide.[53] This theory was contradicted in 2006 by French judge Jean-Louis Bruguière, and in 2008 by Spanish judge Fernando Andreu,[54] who both alleged that Kagame and the RPF were responsible.[55] The French government later ordered a more thorough judicial inquiry, which employed ballistics experts and concluded in 2012 that the shots emanated from Camp Kanombe, an area controlled at the time by the Rwandan army; this report reaffirmed the initial theory that Hutu extremists assassinated Habyarimana.[56]

Following Habyarimana's death, a military committee led by Colonel Théoneste Bagosora took immediate control of the country.[57] Under the committee's direction, the Hutu paramilitary group Interahamwe and the presidential guard began to kill Hutu and Tutsi opposition politicians and other prominent Tutsi figures;[58] within 24 hours they had killed all moderate leaders, [59] including prime minister Agathe Uwilingiyimana.[60] The killers then began targeting the entire Tutsi population, as well as moderate Hutu,[61] beginning the Rwandan Genocide.[62] Over the course of approximately 100 days, between 500,000 and 1,000,000[63] Tutsi and politically moderate Hutu were killed in well-planned attacks.[64]

On 7 April, Kagame warned the committee and UNAMIR that he would resume the civil war if the killing did not stop.[65] The next day, the Rwandan government forces attacked the national parliament building from several directions, but the RPF troops stationed there successfully fought back;[66] Kagame began an attack from the north on three fronts, seeking to link up quickly with the troops isolated in Kigali.[67] An interim government was set up but Kagame refused to talk to it, believing that it was just a cover for Bagosora's rule.[68] Over the next few days, the RPF advanced steadily south, capturing Gabiro and large areas of countryside to the north and east of Kigali.[69] They avoided attacking Kigali or Byumba at this stage, but conducted manoeuvres designed to encircle the cities and cut off supply routes.[70] The RPF allowed Tutsi refugees from Uganda to settle behind the front line in the RPF-controlled areas.[70]

Throughout April there were numerous attempts by UNAMIR to establish a ceasefire, but Kagame insisted each time that the RPF would not stop fighting unless the killings stopped.[71] In late April the RPF secured the whole of the Tanzanian border area and began to move west from Kibungo, to the south of Kigali.[72] They encountered little resistance, except around Kigali and Ruhengeri.[68] By 16 May, they had cut the road between Kigali and Gitarama, the temporary home of the interim government, and by 13 June, they had taken Gitarama, following an unsuccessful attempt by the Rwandan government forces to reopen the road. The interim government was forced to relocate to Gisenyi in the far north west.[73] As well as fighting the war, Kagame was recruiting heavily to expand the army. The new recruits included Tutsi survivors of the genocide and refugees from Burundi, but were less well trained and disciplined than the earlier recruits.[74]

Having completed the encirclement of Kigali, Kagame spent the latter half of June fighting to take the city.[75] The government forces had superior manpower and weapons, but the RPF steadily gained territory, as well as conducting raids to rescue civilians from behind enemy lines.[75] According to Roméo Dallaire, the force commander of UNAMIR, this success was due to Kagame being a "master of psychological warfare";[75] he exploited the fact that the government forces were concentrating on the genocide rather than the fight for Kigali, and capitalised on the government's loss of morale as it lost territory.[75] The RPF finally defeated the Rwandan government forces in Kigali on 4 July,[76] and on 18 July took Gisenyi and the rest of the north west, forcing the interim government into Zaire and ending the genocide.[77] At the end of July 1994, Kagame's forces held the whole of Rwanda except for a zone in the south west, which had been occupied by a French-led United Nations force as part of Opération Turquoise.[78][79] (Wikipedia.) 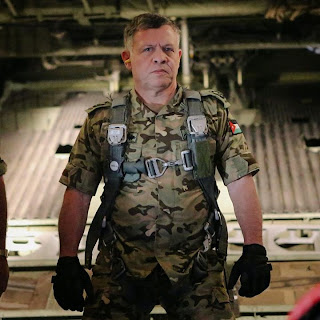 Illustrating Jordan's intention to avenge the murder of pilot Muath al-Kasaesbeh by Isis, King Abdullah has been photographed in full military kit, striking a pose like a Hollywood action star.

The picture, posted on the Royal Hashemite Court's Facebook page, gave rise to rumours that Abdullah himself would participate in the planned bombing of Isis targets.

The King, a qualified helicopter pilot, was trained as an army officer at Sandhurst, and served in the British army before running Jordan's special forces in the 1990s.

The Royal Court yesterday said such rumours were "not true" but the image and fantasy had already taken off online — a fine PR move by the massively popular monarch.
The story is enhanced by reports of what he said in Washington DC right before cutting his visit short to attend to the crisis at home.

Talking to US congressmen on Tuesday night, King Abdullah is said to have quoted a scene in the Clint Eastwood film Unforgiven in which the hero says he will go on a rampage.

Abdullah, who had tried to negotiate a prisoner trade for Kasaesbeh, this week authorised air strikes against Isis following the release of a video showing the pilot's immolation.

Dozens of Jordanian fighter jets have launched bombing raids on Isis targets, hitting what are believed to have been training centres and weapons caches.

A statement read on Jordanian state television declared: “This the beginning and you will get to know the Jordanians.” (The Independent.) 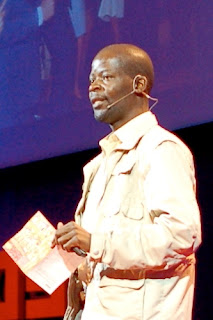 Mr. Shikwati, the G8 summit at Gleneagles is about to beef up the development aid for Africa...

SPIEGEL: Stop? The industrialized nations of the West want to eliminate hunger and poverty.

Shikwati: Such intentions have been damaging our continent for the past 40 years. If the industrial nations really want to help the Africans, they should finally terminate this awful aid. The countries that have collected the most development aid are also the ones that are in the worst shape. Despite the billions that have poured in to Africa, the continent remains poor.

SPIEGEL: Do you have an explanation for this paradox?

Shikwati: Huge bureaucracies are financed (with the aid money), corruption and complacency are promoted, Africans are taught to be beggars and not to be independent. In addition, development aid weakens the local markets everywhere and dampens the spirit of entrepreneurship that we so desperately need. As absurd as it may sound: Development aid is one of the reasons for Africa's problems. If the West were to cancel these payments, normal Africans wouldn't even notice. Only the functionaries would be hard hit. Which is why they maintain that the world would stop turning without this development aid.

SPIEGEL: Even in a country like Kenya, people are starving to death each year. Someone has got to help them.

Shikwati: But it has to be the Kenyans themselves who help these people. When there's a drought in a region of Kenya, our corrupt politicians reflexively cry out for more help. This call then reaches the United Nations World Food Program -- which is a massive agency of apparatchiks who are in the absurd situation of, on the one hand, being dedicated to the fight against hunger while, on the other hand, being faced with unemployment were hunger actually eliminated. It's only natural that they willingly accept the plea for more help. And it's not uncommon that they demand a little more money than the respective African government originally requested. They then forward that request to their headquarters, and before long, several thousands tons of corn are shipped to Africa ...

Shikwati: ... and at some point, this corn ends up in the harbor of Mombasa. A portion of the corn often goes directly into the hands of unsrupulous politicians who then pass it on to their own tribe to boost their next election campaign. Another portion of the shipment ends up on the black market where the corn is dumped at extremely low prices. Local farmers may as well put down their hoes right away; no one can compete with the UN's World Food Program. And because the farmers go under in the face of this pressure, Kenya would have no reserves to draw on if there actually were a famine next year. It's a simple but fatal cycle.

SPIEGEL: If the World Food Program didn't do anything, the people would starve.

Shikwati: I don't think so. In such a case, the Kenyans, for a change, would be forced to initiate trade relations with Uganda or Tanzania, and buy their food there. This type of trade is vital for Africa. It would force us to improve our own infrastructure, while making national borders -- drawn by the Europeans by the way -- more permeable. It would also force us to establish laws favoring market economy.

SPIEGEL: Would Africa actually be able to solve these problems on its own?

Shikwati: Of course. Hunger should not be a problem in most of the countries south of the Sahara. In addition, there are vast natural resources: oil, gold, diamonds. Africa is always only portrayed as a continent of suffering, but most figures are vastly exaggerated. In the industrial nations, there's a sense that Africa would go under without development aid. But believe me, Africa existed before you Europeans came along. And we didn't do all that poorly either.

SPIEGEL: But AIDS didn't exist at that time.

Shikwati: If one were to believe all the horrorifying reports, then all Kenyans should actually be dead by now. But now, tests are being carried out everywhere, and it turns out that the figures were vastly exaggerated. It's not three million Kenyans that are infected. All of the sudden, it's only about one million. Malaria is just as much of a problem, but people rarely talk about that.

SPIEGEL: And why's that?

Shikwati: AIDS is big business, maybe Africa's biggest business. There's nothing else that can generate as much aid money as shocking figures on AIDS. AIDS is a political disease here, and we should be very skeptical. (Spiegel, July 2005) (Shikwati is a harsh critic of Kagame).

Toddy Cat said…
Now that what I call multiculturalism. I'm often accused of being a "racist", whatever that means these days, but I'd be more than happy to swap any of the above for our current alleged "President".
February 10, 2015 at 9:41 AM

Jack Bolling said…
"a massive agency of apparatchiks who are in the absurd situation of, on the one hand, being dedicated to the fight against hunger while, on the other hand, being faced with unemployment were hunger actually eliminated."