The Happening, in 10 stages


From the excellent Social Matter. 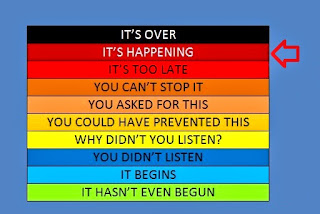 Where we are in this process of course depends on the metric. The year 1918 was stage 10 (“It’s Over”) for European classical liberal society. After a brief interregnum, the Pax Americana was born on VJ-Day, 1945. The Pax Americana is at its zenith. I’m 51, and I expect to die before the current Pax does, so by one metric, we’re at stage 1. (By way of example, post-WW2 Syria is at stage 10. Syria no longer exists. It is finished as a sovereign state, beyond a narrow strip along the coast wholly reliant on Russian and Iranian cash infusions.)

But the decline and fall of the Pax Americana is already baked into the cake, as my and older cohorts move into net tax consumption and r-selected immigrants replace us and the children we didn’t have. The new Americans will not pay nearly as many taxes and will not be at all as loyal to the American proposition. The highly leveraged structure of the US welfare state, plotted with the demographics of the US in 1936, will come under intolerable and ultimately fatal strain. So by another metric, we’re at stage 7.

As for Britain and Europe, it's all over but the crying. 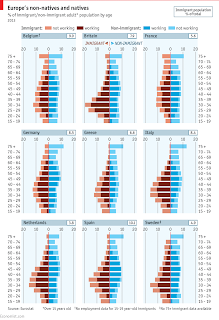 Email Post
Labels: death of the west the doom loop