What is wrong with women?

"I would not make it home" 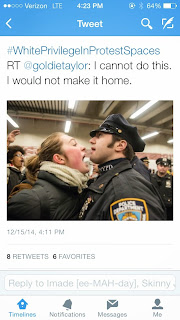 I agree with this Tumblr author. I'm a 220-pound white male and if I did this, I would not make it home.

Imagine me on the left, and a 140-pound female, or even another 220-pound white male on the right. What do you think would happen? I'm guessing those cops in the background would follow their triggered instincts and start raining down blows on my head. So if men and women are truly equals in the eyes of God and everybody, why aren't the cops pummeling this woman? Is it female privilege?

My hypothesis is we are treating women like men, and they are screaming for help.

To see just how far down the rabbit hole women are falling, check out this iSteve post from December 15.

Anonymous said…
"So why shouldn't I assume this woman is, in fact, signaling sex... My hypothesis is we are treating women like men, and they are screaming for help."

My wife made a revealing remark a few weeks ago. "You scare me sometimes... in that special way". The woman in that picture wants to be subjected to a burning death-glare directed right at her pupils, not a thousand-yard stare over her head. Hasn't the cop ever seen a romance novel cover?
December 23, 2014 at 12:40 PM

IA said…
European women really are crazy by world standards. There must be some genetic explanation somewhere like the Black Death or even further back to Sappho, Amazons, Medea (who mudered her children), Dionysian Meanads and other examples where violation of sacred precincts causes the gods to drive women mad.

In one poem by Bacchylides two sisters are driven mad because they bragged that their father had more gold than Zeus. Circe turned Odysseus' men to swine. Artemis turned Antaeus into a stag after he accidently saw her bathing at a sacred grove. He was torn to pieces by his own dogs.