You heard it here first


Folks, when the prognosticating mood strikes you, this blog is really all you need to read. No matter the object of whichever policy the Establishment chooses to ride off the rails and over the cliff, your Anti-Gnostic has probably broached it first. I said it here in January 2012 and I'm sure earlier in the iSteve comboxes:


Some causes the Left has quietly tiptoed away from:...

3. Environmental advocacy. Here is a fairly typical jeremiad. Note the passive voice, as if deforestation and fauna extinction are just happening in Africa, like an earthquake or tidal wave. I don't hear anybody lecturing China or India on their appalling industrial practices. David Gelbaum's purchase of the Sierra Club is well-documented. National parks in the American Southwest are becoming no-go zones. Mother Jones, Audubon and other environmental groups don't seem to be covering these crucial topics.


I have said for some time that environmentalism is one of those causes that the Left is going to quietly back away from. Most of our 1+ million new Americans a year come here precisely because they don't want to hunt, fish or strap on a backpack. Also, pensions, disability checks and public schools won't pay for themselves, so we better crank up the bulldozers.

The Left appears to recognize its dilemma, hence the move away from difficult, hands-on stuff like land stewardship and wildlife management and on to vague, incorporeal notions like 'global warming.'

And now it has come to pass: the LA Times has pronounced sentence on "bushy-bearded Scot" John Muir as the first Dead White Male environmentalist racist whose corpse is to be dug up and pissed on.

As the first president of the Sierra Club, Muir shaped enduring perceptions about how the wild world should be prioritized, protected and managed.

But now some critics are arguing that the world has changed so much in the century since his death that Muir has gone the way of wheelwrights.

He is no longer relevant.

"Muir's legacy has to go," said Jon Christensen, a historian with UCLA's Institute of Environment and Sustainability. "It's just not useful anymore." ... To Christensen and others ... Muir's notion that immersing people in "universities of the wilderness" — such as Yosemite — sends the message that only awe-inspiring parks are worth saving, at the expense of smaller urban spaces.

Critics also say Muir's vision of wilderness is rooted in economic privilege and the abundant leisure time of the upper class.

Rather than accessing Muir's beloved Sierra Mountains as backpackers, skiers or rock climbers, they argue, Californians would benefit more from the creation of urban parks, additional roads and trails in wild lands.

Nature exists in many forms, they say. Pristine wilderness is but one.

On Thursday, six weeks before the centennial of Muir's death, conservationists, geographers, lawmakers, artists, historians and environmental justice advocates will meet at UCLA to discuss his legacy and relevance. The occasion is the investiture of Glen MacDonald as the university's John Muir memorial chair in geography.

Among the presenters at the event, titled "A Century Beyond Muir," will be Christensen, who is a friend and colleague of MacDonald's.

Lining up behind him will be other critics — including Richard White, a historian at Stanford University who says Muir's late 19th century, Anglo-Saxon brand of environmentalism and bias toward untouched wilderness skewed the way nature has been portrayed in popular culture.

For example, in his writings, Muir said the squirrels he killed on his ranch in Martinez, Calif., were disgusting pests out to ruin the orchards. But he described the squirrels living in his beloved High Sierra as hard-working creatures like those later popularized in the Disney classic "Snow White."

Critics also see a correlation between the emotional, biblical language of Muir's writings and the demographic makeup of national park visitors and the ranks of the largest environmental organizations — mainly aging, white Americans.

The Sierra Club, which Muir founded, and the Audubon Society are struggling to connect with California's diverse population, particularly Latinos, who polls show are among the most devoted environmentalists in the state. A strong and diverse membership in California, where Latinos are expected to become a majority by 2050, is important to influencing political decisions and raising funds to support missions of conservation and environmental education.

Yet "the conservation movement reflects the legacy of John Muir, and its influence on a certain demographic — older and white — and that's a problem," Christensen said.

He is joined in that view by D.J. Waldie, an author and expert on Southern California culture.

"We have to reimagine our relationships with nature to accommodate modern, increasingly diverse communities that see the world differently than white Anglo-Saxon Protestants like Muir did in the late 19th century," Waldie said.

It is all to be destroyed my friends. The pristine wilderness, the apex predators, the old flora, the unspoiled vistas. Did we really believe r-selected groups would look on that space so scrupulously maintained by a K-selected people and think, take only pictures, leave only footprints? 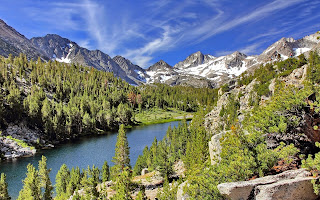 Plenty of room there for solar cell arrays, wind farms, water treatment plants, strip malls, affordable housing. And below that, mineral riches that will back the dollar to support welfare transfer payments for decades to come. Against all that, you're going to pose white, middle-class backpackers? 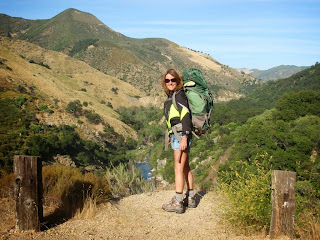 "Say what?"
I am sick to my soul. Those wilderness spaces will not be maintained absent a very bloody and violent defense against encroachment which a prosperous people are loath to take up. Americans will either defend these natural riches with their lives or they will see them consumed, but I am afraid we are all going to say the same thing: I've got responsibilities, so it won't be me.

However this turns out, that old America which I and others in my cohort glimpsed in that short, stupid period called youth--that time when we should have been cracking heads back when we still had the numbers and the vitality--is gone forever. There is no hope.
Email Post
Labels: death of the west environmentalism the doom loop

Scotsman said…
Racial justice > everything else

...is what you have to keep in mind when dealing with the modern left. I have posted on here before that shitlibs have long sold out on the labor question, even borrowing scab-slogans like 'jobs Americans won't do'.
November 14, 2014 at 4:29 AM

Toddy Cat said…
"Latinos, who polls show are among the most devoted environmentalists in the state. "

This is meant to be a joke, right? I've met lots of Latinos, and some of them were really great people, but I've never met a single one who gave a tinker's dam about the environment. What "polls" are these dimwits referring to?
November 14, 2014 at 10:04 AM

lannes said…
Environmentalism is the new Socialism; as such, lefties are not going to back away from it.
November 15, 2014 at 4:38 AM

Psykonomist said…
Good post. "Environmentalism" was only ever a tool, and once it is no longer useful - or even counterproductive- it will be discarded.
November 18, 2014 at 10:31 AM

formercommunist said…
Psykonomist has it exactly right. "Environmentalism" as agitated by the Left is nothing more than a tactic. Whether they are giving up on environmentalism, I don't know.
May 18, 2016 at 5:12 PM