"We know it's over-the-top expensive, but Thanksgiving comes once a year. If you can splurge for this, you have a lot to be thankful for," said Old Homestead Steakhouse co-owner Marc Sherry.

It features nine-courses including squab stuffed with foie gras soaked in a $5,000 a bottle L'Esprit Cognac, roasted organic turkey stuffed with Japanese Wagyu and gravy made with a $1,750/bottle claret, butternut squash with black truffles, and sweet potatoes topped with three pounds of caviar. For dessert, diners will be served bourbon-soaked pears with pumpkin paste dusted with 24-karat gold.


For the elite, it's like 2008 never happened. Myself and a number of my peers were personally taught some severe financial lessons with that downturn. My lifestyle has never been the same since; I live well within my means now, much to the economists' horror. That's why I was screaming at everybody that a 'bailout' was unnecessary. The 2008 bust was big news because of who was ending up poor. Unlike a high-flying Texas realtor from past boom-bust cycles who had to suck it up and go work at the local hardware store, now it was the personal friends of Hank Paulson and Ben Bernanke looking at wage-slavery. So clearly, Something Must Be Done. It was, and it worked beautifully. The Fed just printed up money and handed it out in exchange for assets that should have been liquidated for pennies on the dollar.

As the Mises Institute's Joseph Keckeisen wrote in 2009,


The corpses of the erstwhile automobile empires would have breathed their last, their good assets now transferred to the hands of newer more responsible entrepreneurs. The prior executives would be moving over to Cheapside and brushing off their overalls, perhaps in line to join a new remodeled UAW, in search for some job where they couldn't mess things up any more.

The bankruptcy courts would be finishing up their exequies for the deceased former titans of the packaged debentures. The tombstones of the new economic cemetery would display the once great names of Fannie and Freddie, of Citi, of AIG, of Merrill Lynch, along with the hapless Lehman Brothers, interred several months before. And so many more financial cadavers would have been laid to rest, their memory duly to be forgotten, as perpetrators of a fake capitalism now buried and forgotten. Perhaps the cemetery could be economically located in an enlarged churchyard at Trinity Church at the head of Wall Street, to occupy the now excess real estate in the area and be a perpetual reminder that treason in the capitalist world will always be avenged.

Washington would finally be silenced, even if the Fed were not yet duly junked in the process, and the Treasury's overbearance would be bridled as the rest of the uneconomic trash was being flushed out of the system.

The Case Shiller indices would have completed their downfall to a level that future homeowners could devote the traditional 30 percent of their money incomes towards purchasing their long-wanted love nests. New families would be rushing in to fill the vacant home sites.


So this Thanksgiving 2014, remember 2008 as the bellwether for the US government's descent into banana republic economics: the rich are to be protected from becoming poor. And please stay home on Black Friday. 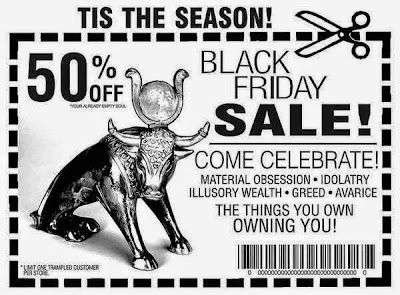 Anonymous said…
Had the Mises Institute had its way, the Great Depression would have looked like a gold rush.
November 27, 2014 at 12:23 PM

Kakistocracy said…
Did you know that the FRB would not divulge what it was paying for all of those underwater securities? If one had a market value of 10 cents on the dollar, did they purchase for market (the answer is no), 20 cents? 50? Par? Over par?

Do you know The Bernake was actually asked that directly in testimony and refused to answer?*

Bernake wouldn't say what they were paying because obviously it was far above market, and possibly even par. This leaves open the possibility that some banks who purchased their bonds at discount actually made a profit on their losses!

Because these issues reside within such murky esoterica, the public was never able to grasp what was happening in layman's terms.This was very wealthy bankers making very large wagers, and losing heavily. Then the government took the taxpayers money and made them whole. It was outrageous. But I suppose given such a current surfeit of outrages, it was just "get in line."

* this was several years ago and I do not know if he (or others) subsequently provided the information.
November 29, 2014 at 1:56 PM