"Nature is the ultimate fascist"

Liberal, anti-fascist whites are getting old and tired, and their children are being killed. 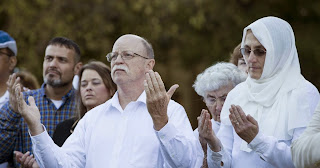 A God to Damn Us, by Gregory Hood.


The former Army Ranger known as Peter Kassig met his end under the knives of the Islamic State as Abdul Rahman Kassig. Even after his death, his mother is making media appearances wearing the hijab. For that matter, James Foley was a convert to Islam, as were other hostages. And while some undoubtedly convert in the (futile) hope of better treatment, it appears that many of these cases are sincere. Nor is this surprising, as the likes of Kassig, Foley, and others who have been taken captive in the Islamic State’s territory defined their lives by their efforts to help Muslims thousands of miles away from home.

Even liberal Whites ostensibly motivated by vacuous concepts like “human rights” can’t help but be impressed by those who possess actual strength of belief, especially from Third Worlders immune from charges of racism or cultural imperialism. Of course, many of these Third Worlders actually are racist or imperialist, but that reality is easily ignored by liberals who insist on viewing them as agency free moral mascots. Yet the fact that some Whites (even former Army Rangers) are willing to dedicate their entire lives to serving the Other and literally renounce their own identity at the moment of death testifies to something deeper than simple egalitarianism. It’s a kind of ethical exhaustion--liberal Whites are weary of the moral responsibility of existence and survival.

The very absurdity of our culture (if we can even call it a culture) shows that many Whites are looking for a way out. They actually seek escape through foreign occupation. To be occupied is to live in a world where meaning and cultural context is provided by a foreign people. You can be a religious minority (or an atheist) in a majority religious society and be “free,” but power, narrative, and taboo are ultimately in the hands of someone else. The same goes for being a racial minority or sexual minority.

This feeling of occupation is what underlies the fury of most minorities towards their host societies, no matter how well they are treated. To most people, being a minority is alienating--even if no one is specifically insulting you, you recognize you exist at the sufferance of someone else. However, to many liberal Whites, this feeling comes as a relief. In a kind of parody of Christianity, powerlessness constitutes a certain moral authority because it removes the possibility that you can inadvertently oppress someone else. It’s the only way to be free of White guilt, as even charity is just an expression of privilege. To the egalitarian mind, freedom really is slavery.

The hard truth is that Freedom Failed. Its failure is all around us. The Death of the West is an ongoing demographic and cultural reality. But what comes next? If Identitarians fail, it may be nature’s backup plan--Islam, particularly in its militantly monotheistic, Wahhabi Sunni variant.

Robert Ferrigno’s Prayers for the Assassin Trilogy posits exactly this outcome for the United States--a mass conversion as a response to spiritual exhaustion. The society he posits is built on a lie (in the book’s case, a nuclear attack blamed on Israel) and under the sway of religious fanatics, but is in many ways more admirable (and certainly more masculine) than what we have now. As Ferrigno notes, “the moral certainty of Islam was the perfect antidote to the empty bromides of the churches and the corruption of the political class.” Ferrigno’s scenario is obviously implausible but the demographic replacement of post-Christian Whites with Muslims is precisely what we are seeing in Europe today.

Our post-society is the rotten fruit of “liberty” and classical liberalism. We are told that once they are free of the dead hand of tradition, individuals can determine their own identity, inherently possess limitless potential to achieve perfection, and create the best kind of society by pursuing enlightened self-interest. Instead, we find technological wonders and vast wealth in our subjugated Europa and her cultural colonies in America, Africa, and Australia, but the denizens of these depraved outposts of supposed civilization can’t even be bothered to sustain themselves.

There are no limits to this process. It will follow its course until it is replaced. And the attempt to defy Nature is leading to a predictable result--inadvertent hilarity, followed by European extinction. In the end, Nature is the ultimate fascist...

Much more at the linked article. I know there are a number of polite, generous-minded and faithful Christians who read this blog. Please click through, and click through the embedded links in the OP.

We buy peaceful co-existence with Islam and other alien cultures through an unprecedented level of hedonic consumption, itself made possible by unprecedented levels of debt and monetary stimulus. The West has been pulling future spending forward to fund present consumption for a long time, and the whole pyramid scheme nearly came undone in 2008. There was nothing magical or financially arcane about the remedy. In simple terms, we printed money to paper over the enormous hole that opened up in nominal wealth, betting that the "real" economy would catch up and fill it. These are the "green shoots" upon which neo-Keynesians like Bernanke have bet their intellectual integrity, and on which current Fed chair Janet Yellen has bet her place in history. We are winding down a six year-process of printing EIGHTY FIVE BILLION WITH A B dollars a month and buying mortgage-backed securities, student loan-backed securities, and US Treasury debt with them. The collateral motive is to chase investor dollars from "safe" harbors like GSE and sovereign debt securities to riskier investments like corporate equity and venture capital funds.

Has the real economy (i.e., the part of the economy supported by savings from the surplus generated by past production) grown enough to fill that hole in nominal wealth and enable us to defer hard questions about who gets what and where they live, and who they are? We are about to find out. And let me end by pointing out that this gamble, and not some academic principle or moral imperative, is what is behind the court economists' obsession with growth, growth, growth by immigration, globalization, automation, scale, and whatever other euphemisms for job loss, displacement and obsolescence we can dream up. Because otherwise, we are falling back into a 3.5 trillion-dollar hole and population sub-groups might not continue feeling so accommodating and generous to each other.
Email Post
Labels: economics islam multiculturalism

Anonymous said…
There is no human hope. Yet there is more than merely human hope.

"What was the meaning of all that whisper of fear that ran round the west under the shadow of Islam, and fills every old romance with incongruous images of Saracen knights swaggering in Norway or the Hebrides? Why were men in the extreme west, such as King John if I remember rightly, accused of being secretly Moslems, as men are accused of being secretly atheists? Why was there that fierce alarm among some of the authorities about the rationalistic Arab version of Aristotle? Authorities are seldom alarmed like that except when it is too late. The answer is that hundreds of people probably believed in their hearts that Islam would conquer Christendom; that Averroes was more rational than Anselm; that the Saracen culture was really, as it was superficially, a superior culture. Here again we should probably find a whole generation, the older generation, very doubtful and depressed and weary. The coming of Islam would only have been the coming of Unitarianism a thousand years before its time. To many it may have seemed quite reasonable and quite probable and quite likely to happen. If so, they would have been surprised at what did happen. What did happen was a roar like thunder from thousands and thousands of young men, throwing all their youth into one exultant counter-charge; the Crusades. It was the sons of St. Francis, the Jugglers of God, wandering singing over all the roads of the world; it was the Gothic going up like a flight of arrows; it was the waking of the world."
November 19, 2014 at 12:19 AM

icr said…
It's truly a wonder how well international banksterism fits with cultural marxist ideology. Shows that no conspiracy is necessary.
November 19, 2014 at 6:46 AM

Anonymous said…
"this gamble [propping up the 'Multicultacracy'], and not some academic principle or moral imperative, is what is behind the court economists' obsession with growth, growth, growth by immigration, globalization, automation, scale..."

I'd guess that all three are at play among the academics you speak of. For all three, anyway, this delightful quotation from Edward Abbey is called for:

"Growth, for the sake of growth, is the ideology of the cancer cell."

Note: Edward Abbey is remembered as a far-left eco-activist, a kind of militant hippie, an advocate of eco-terrorism. However, I once had the opportunity to read his diaries, published after his death (d.1989). They were chock full of 'racist' content that would relegate him to the "David Duke Right" today (to the extent we can even speak of one). Nobody in the milquetoast, PC environmental movement today would touch him with a long stick.

Toddy Cat said…
"liberal Whites are weary of the moral responsibility of existence and survival."

This is it, right here - the weird death-wish that seems to have seized much of the West's leadership class. But despair is a sin, and not all of us are ready to die, or see our Civilization die, just yet...
November 19, 2014 at 11:13 AM

Anonymous said…
Anon #1, where is that quote from?


Abbey's writing is filled to the brim with political incorrectness. He's largely fallen out of the enviro pantheon.
November 19, 2014 at 11:38 AM

The Anti-Gnostic said…
It's old Chesterton, G.K., "The Everlasting Man." Google books has it.

It's astounding to me how Great Britain could produce so many pragmatic, prescient thinkers in that time frame of Victoria thru Edward. Lewis, Tolkein and old Enoch Powell were the last of the breed, apparently.
November 19, 2014 at 1:25 PM

Your Kakistocracy said…
TC, I think the key is more in our response to despair than the sentiment itself. If I had it within my power to adjust collective despair, it would increase rather dramatically. My observation is that we suffer a huge deficit of despair in relation to the immigrating reality around us. People are largely fat, complacent, and oblivious. All luxuries that despair will not purchase.

I tend to agree.

Axe Head said…
A Ponzi scheme needs growth growth growth. Without it the whole thing collapses.
November 20, 2014 at 10:32 AM

Anonymous said…
It's more likely to be some form of low-church Protestantism than Islam, at least in the US.
November 20, 2014 at 11:20 PM

Unknown said…
Aristotle did write that some men were natural slaves. Some people wish to give up their freedom as fast as possible.

Bert said…
Off-topic, but Steve Sailer's blog has gone extremely downhill ever since he moved over to Unz.
November 22, 2014 at 11:42 PM