A day in the life of Michael Brown 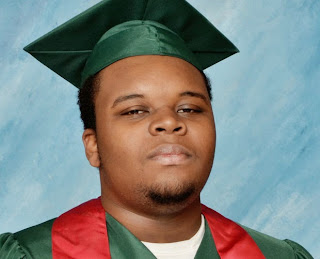 So Mike Brown comes staggering out of the convenience store in a state of utter confusion. He got high, got confused, panicked and did something dumb, and now he is totally unsure of himself. Worse, he is now in the badlands territory of the enemy. He knows he is high and thus vulnerable because stoned people are sort of like large children. He is paranoid from the effects of the drug. He is also afraid because of years of racial divide, racial myth and racial enmity, and he believes that white cops are out to get the black kids. What else explains the ghetto? He doesn’t know and no one he knows knows either, so it’s assumed to be the pigs and the racists in government. Now we have a paranoid young man who is barely in control of his large body, and he is in a stage of utter mental disorder. Then the worst possible thing happens: he is hailed by authority, but even worse, one of them. The white cops who want to jail him for their racist plans are trying to talk to him, trying to get him on something. He panics again and we all know how it shakes out.

Over time I have come to the regretful conclusion that most human activity consists of denial so that we can hold on to whatever social positions we have as individuals. People do not like to look at the core issue but instead take sides that represent their interests. In the case of Mike Brown, two sides pop up immediately: those who want to pity him and use him to argue for more equality and less authority, and those who see him as a threat and want to use him to argue for less criminal activity. Both have truth to their statements, but they miss the real issue here.

The real issue here is that diversity does not work for anyone. By work, I mean function as a system of social order. Diversity makes us distrust each other. It strips away our identity, so we are always paranoid. We will never trust the cop of a different race because we perceive that he has an agenda against us. We will never feel good about living in a country where our people are not the dominant authority. This is not just hard-wired into our gut instinct, but it is also pure logic. People divide on differences, and wishing that away by saying “we are all one” has never worked. We need communities of our own. Diversity puts us into conflict and creates situations like the one that got Mike Brown killed. There may be no fully good guys, and no fully bad guys in this one, just another broken human system that betrays us for the convenience of those who want not to rock the boat.

Mike Brown wasn't inferior, just very different from you and I. In other settings, aggressive men who outweigh most of us by over 100 pounds do quite well for themselves. In an integral community for Michael Brown, old bulls with similar time preference and T-levels are on hand to channel aggression into socially redemptive pursuits. (Black America has been decimated of its older, steadier males thanks to welfare enabling women to sleep with attractive lotharios, and criminal laws drafted by whites who prefer higher levels of organizational complexity.) Instead, he's in a dysfunctional, matriarchal stew ruled by vestigial public sector whites hanging on for pensions and seniority, even as their private sector peers slip away to the next county.

Going up a number of levels above Mike Brown's world, African Big Men like Robert Mugabe are not actually cynical. Robert Mugabe is as sincere in his principles as Ron Paul is in his: you reward your friends and punish your enemies; you get while the gettin's good; you spread the green around and buy status for your family. The Non-Aggression Principle? Nigga pleaz. This is the problem with good-hearted whites: they think inside everybody is just another classical liberal or social democrat trying to get out.

As a commenter at the OP notes, liberalism is cruelty.
Email Post
Labels: biodiversity lies and the lying liars who tell them

Toddy Cat said…
Lots of truth to this. In the long run, leftist lies are bad for everyone, of any and all colors. We on the right need to emphasize this more. Diversity kills.
October 24, 2014 at 9:46 AM

The Anti-Gnostic said…
We should repeal the "public accommodation" laws and allow people their safe harbors, from which they may interact or not interact as they choose. Otherwise, it will all end in tears.
October 24, 2014 at 9:49 AM

lannes said…
M.Brown wasn't too stoned to throw some hard punches. As for holding his hands up, what does up or down matter when a perp is coming at you?
October 24, 2014 at 11:08 AM

Anonymous said…
"In an integral community for Michael Brown, old bulls with similar time preference and T-levels are on hand to channel aggression into socially redemptive pursuits. Black America has been decimated of its older, steadier males thanks to welfare enabling women to sleep with attractive lotharios, and criminal laws drafted by whites who prefer higher levels of organizational complexity."

I occasionally see older black men giving stern lectures to young whippersnappers in public. The advice I overhear is generally very sound, but one isolated talking-to from a random stranger is too little, too late for a young man heading down a bad path in life. It's not enough to cross paths in a restroom with a stranger who admonishes you to clean up your language- you need a father (or some roughly-approximate male authority figure) who will demand over and over and over again that you stop cussing, until self-censorship becomes an ingrained habit.
October 24, 2014 at 11:31 AM

Toddy Cat said…
The real problem, of course, is that deep down inside, most blacks would rather live in white-run areas. This is why we see the pattern of blacks moving into a neighborhood, whites moving out, into an outer suburb, and blacks then following them, squalling all the time about "racism". Hell, we even see this at the national level, with blacks from black-run African countries frantically trying to get into the United States and Europe.

Blacks may vote for blacks, for tribal reasons, most blacks don't want to live in a black-run city. What blacks secretly fear is not racism, but that whites will somehow manage to get away, leaving blacks to their own devices. They know what that means, and they rightly fear it.

Either rule them, with all the baggage that entails, or build a wall and enforce separation ruthlessly. There's no other way.
October 24, 2014 at 12:49 PM

Anonymous said…
"What blacks secretly fear is not racism, but that whites will somehow manage to get away, leaving blacks to their own devices."

Anonymous said…
This is a highly simplistic analysis, a great echo chamber for like minded whites. It is interesting how you feel yourself qualified to take an isolated situation and draw vast conclusions about an entire race.

There is no doubt that with diversity comes challenges, but there are many institutions in America that have survived diversity and have overcome problems of race. Just look at the military.

These high minded diatribes are interesting to read, but what is a realistic solution? It is one thing to identify a problem, but how do you solve it?

The Anti-Gnostic said…
@KS, for starters:

We should repeal the "public accommodation" laws and allow people their safe harbors, from which they may interact or not interact as they choose.

That won't happen, so things will just have to run their course. There's not enough money, and certainly not the will, to run the entire country like the military. And the military is being deconstructed.
October 25, 2014 at 9:36 PM

Your Kakistocracy said…
If trends hold, KS will shortly be reporting that a premier sci-fi author stole his dialectricals.
October 26, 2014 at 1:39 AM

And it also happens with Asian kids, and Amish kids, and kids of the very wealthy. The question is, HOW often, as compared to blacks? Statistics indicate that young blacks are about 27 times more likely to commit these sorts of acts than any of the above. And as for "solutions, how about separate countries? It worked for Czechoslovakia.

SFG said…
The military also selects which blacks (and whites) it takes. They don't get the very worst ones.

The military also has military discipline--they can theoretically shoot you if you get out of line--and actual use for violent instincts. Mainstream society has neither--if you want to fight, you have to simmer at your job for 8-9 hours until you can go home and get in a bar brawl.
October 28, 2014 at 1:41 PM