Remember Jason Russell? He was a Christian activist who lobbied for armed intervention against Ugandan strongman Joseph Kony. More on Jason in a bit. 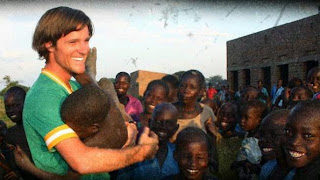 The Kakistocracy has been documenting just how worried this whole Islamic-militancy-thing has got our leaders. After all, enough incidents like Israel experienced from 2000 to 2005, and native-born mobs react to a quiescent government by chasing Muslims into the ocean and telling them to swim home. And the Djinn will be truly out of the lamp at that point, because the government will have lost legitimacy. High profile politicians will find themselves evicted, literally, from their offices and lots of government employee-pensions get abolished with a stroke of the new leadership's pen. Or it's full-scale coups and drumhead trials, as will probably happen in Europe.

Like Kak, I too wonder if a grim realization is beginning to nag at people, even as they nonetheless feel compelled to continue going through the motions.


How many staunch advocates realize that the philosophy underpinning their purple-faced apoplexy is almost entirely driven by externalities? That if the rails of acceptability were shifted suddenly from 10-20 on the left to 70-80 on the right, they’d abandon their cherished liberal ideals with the enthusiasm of a straight man who just felt a bulge in the crotch of his make-out partner.

It is true that most people are idiots. And most are also cowards. That’s why he who controls the narrative, controls. People will generally espouse not what they believe, but what they are permitted to believe. And this is why we have a mainstream political spectrum that ranges from liberal all the way to neocon. That these two groups, who agree on practically every fundamental of society, manage to summon the energy for even lethargic combat is a testament to the power of propaganda. That simple preservation of our civilization and its people is a topic unfit for discourse is a better testament still...

...I wonder how many mainstreamers–liberals even–sometimes take a surreptitious peek under the skirt of our lewd philosophy. I like to think a few of the semi-lucid ones are beginning to see the hideosity they’ve brought home from the bar. Not that an inchoate awareness or even rapid sobriety will cease their forward “progress.”

It will continue for now because it may do no other. As we have discussed previously, madness has its own momentum and traces a common route. Race replacement has been cheered for years as the only acceptable opinion in the West. And who dares stop applauding first? Richard the Lionhearted Lowry?

Even if there were sober men of the ascendant left who realized the enormity of their mistake, what may they do now but continue clapping? It’s possible some may even be sweating along with their betrayed countrymen…a horrified rictus where the smirk used to reside. And still they continue clanging palms like an organ grinder’s monkey. From their perspective, what else is permitted?


And from our good friend's routine eloquence, these words are what grabbed me: "madness" and "horrified rictus."

From my last post, we see two responses to our society's hysterical embrace of the other:

1. Madness in the ennervated gazes of Adriana Ford-Thompson and Pippa Bacca. They have lost their minds, like poor, brainwashed Winston Smith. 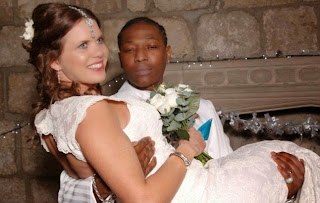 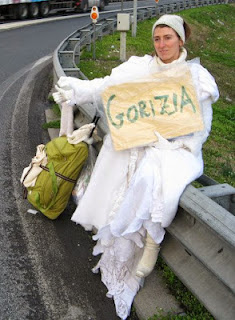 2. Here's the terrified Amy Biehl and her parents, gazing into the abyss as their limbic systems scream at their cerebrums that they are in danger and need to leave quickly: 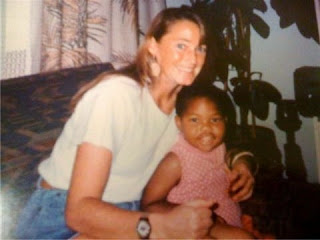 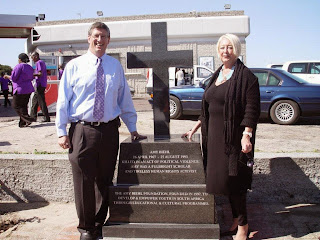 And now, back to Mister Russell, so capably diagnosed by an anonymous AltRight author two years ago:


As people we learn to moderate our vulnerability to horror and madness by drawing boundaries around ourselves. The more prudently and conservatively we give our love and our faith, the more protected from madness we become. The more liberally we empathize or otherwise identify with strange peoples, the more heartrending their fates or their atrocities become. This is because our litmus for sanity is different than theirs. When we “go native” in Africa, we go mad, because we are not psychologically prepared for the horror that alien humanity manifests.

Jason Russell has, at least momentarily, gone mad. And he has probably been unstable for a long time. Russell’s problem is likely multifold, but central to any pathology the man has is his inability to reconcile reality to his conception of reality. For “Mister Russell,” Africans are Whites who don’t yet have coffee shops or grief counselors because of a few evil men (and, likely, White racism).

To Russell’s eye, Jacob is just one of thousands of ordinary children trapped in hell and tormented by a devil. It is an unbearable vision for the young filmmaker because he views Africans empathetically. But Russell’s is a view askew because Jacob is not White. Jacob is an organic part of a different world. A world that fits him even as it puts him at risk. A world he made before he was born.

It seems that not all White liberals are disingenuous after all. Some, the literally crazy ones, are entirely genuine.

Email Post
Labels: death of the west the dark enlightenment

Your Kakistocracy said…
Hungary's Viktor Orban provided an insider's account of the state of the rictus:


At a meeting with Hungary’s ambassadors to foreign countries on Monday, Mr. Orban recited part of his speech in Ypres, France at the European Union prime ministers’ summit and commemoration of the World War One centenary.

There he said he wanted to include in the leaders’ joint statement that immigration is wrong, and Europe’s aim is to cease immigration.

“There were two types of reactions: some envied me because they mustn’t say things like that although they’d very much like to. The others disagreed because they’ve failed to turn around demographic trends with family politics; have kept social tension at bay by subsidizing the jobless; and aren’t fazed if the ethnic basis of a nation state is broken,” Mr. Orban said.

Two types of western leaders: a) God help us, but I can't say that, and b) Who cares, let them eat halal.

About what most of us would expect.

And the "b" types will only be disciplined when their homes and offices begin to look like a Ferguson Quiktrip. And their summer vacations are spent in public pillory stocks.
September 7, 2014 at 2:38 PM

Northern Refugee said…
"The Kakistocracy has been documenting just how worried this whole Islamic-militancy-thing has got our leaders. After all, enough incidents like Israel experienced in 2005, and native-born mobs react to a quiescent government by chasing Muslims into the ocean and telling them to swim home."

I was sure that 9/11 would provoke, if not a revolutionary change in immigration policy, at least a frank discussion of Islam and the west. Instead, the multi-cult type doubled (tripled?) down, and Islamic immigration ROSE. We now have the spectacle or a post-9/11 police state importing Somalis, providing them with taxpayer subsidized leisure, and standing idly by while they travel the world, performing Jihad.
September 7, 2014 at 7:03 PM

The Anti-Gnostic said…
I've mentioned before: I go back and forth on this.

Why I think the liberal elite may have a tiger by the tail is all the tribal energy I see unleashed at athletic and other scaled events.

Now imagine things after a big deflationary event wipes out those distractions, and combine that with the huge collection of small arms amassed by Americans. Outside the sad objects of this post, white Americans are still extremely organized and protective of their kids.

I just came from a high school event today. I have little doubt that if TS really HTF, this county would go on functioning. The difference would be all the LEO's manning roadblocks on the main thoroughfares and all the homemade signs on front yards, reminding passers-by that the occupants are armed.
September 7, 2014 at 7:45 PM

Dad29 said…
"I just came from a high school event today. I have little doubt that if TS really HTF, this county would go on functioning. The difference would be all the LEO's manning roadblocks on the main thoroughfares and all the homemade signs on front yards, reminding passers-by that the occupants are armed."

[Laughs] Only until there is 30% unemployment, an overthrow of the gummint, AND the white middle class collectively organizing persistent armed rebellion will your doomsday scenario be a possibility.

The Anti-Gnostic said…
Talking with Syrian immigrants has colored my perspective on TSHTF scenarios. I can tell you from in-person discussions: these people literally had no idea what was coming. No country in human history has pursued the policies we are pursuing ad infinitum. It all just keeps working; until it doesn't.

Your Kakistocracy said…
I'm glad you linked to that 2009 piece. Reading it was heartening in the sense of reminding that events do not require my perception to proceed.
September 11, 2014 at 12:11 AM

ShrikeWeasel said…
"an overthrow of the gummint, AND the white middle class collectively organizing persistent armed rebellion will your doomsday scenario be a possibility."