Airstrikes undertaken as US re-engages in Iraq

And so, again, the US government deploys military force to stop a group of Islamic fundamentalists which it armed, along with its stalwart allies, the Houses of Saud and Thani. As with bin Laden before him, Abu Bakr al-Baghdadi will undoubtedly plot and plan and finance a way to bring this fight here, as on September 11, 2001.

What possible justification is there for open borders if we are going to choose sides in ancient conflicts and exercise no discretion as to the ethnic or creedal characteristics of immigrants? Pro-immigration advocates, I am waiting to hear from you.

I'm frankly skeptical about the bombing. Historically, when you wanted to eliminate an enemy as a threat you killed every male over age 14 and enslaved everybody else. Nobody has the stomach for that sort of thing any more.

This is just precious, by the way:

"This should include the provision of military and other assistance to our Kurdish, Iraqi and Syrian partners" who are fighting the militants, airstrikes against the militants' leaders and forces and support for Sunni Iraqis who seek to resist the extremists, they said in a statement. 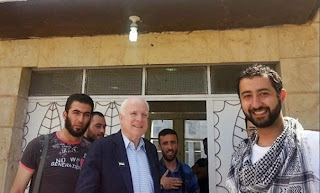 How come this senile old man and his drag queen buddy are still quoted in the press, much less allowed to participate in the national senate? Any sane polity would have ordered them into exile (at the least) by now.

By the way, while browsing my indexed pictures, I came across this logo I had submitted per Bryan Caplan's invitation for his Open Borders Facebook page. Shortly thereafter, Caplan's intern decided open borders weren't such a good idea after all, and deleted numerous submissions. 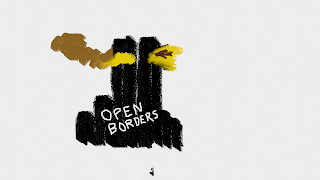 Unknown said…
I believe in open borders for Israel, especially for all the Arabs and Africans around it.
August 8, 2014 at 9:13 PM

These folks resemble the zombies from WWZ: lethal, terrifying, fast moving, and incapable of any higher function. They can kill, but they cannot feed or clothe themselves. They cannot design or build their own weapons. They cannot create or maintain the infrastructure needed to support modern population densities. Left to their own devices, their society would quickly degenerate to a pre-modern population and life expectancy. They would reach the Malthusian limits and burn themselves out. We should quarantine them and let nature take its course. Unfortunately, we in the West will come to their aid and bring their refugees into out societies (see Somalia as exhibit A).
August 9, 2014 at 12:13 AM

Northern Refugee said…
I have bee watching the Vice series on the Islamic state. In episode 2, they feature a Belgian who has moved to Syria with his young son to fight with the militants (another job Belgian won't do). When he receives sufficient training, he will be able to travel anywhere in the Western World with an EU passport. Another powerful argument for open borders.
August 9, 2014 at 11:02 AM