Study confirms what you already know, from iSteve: 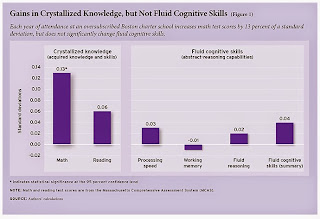 The graph above is consistent with my long-held view that while it’s difficult (but not necessarily impossible) to boost adult IQ through schooling, schools could generally be doing better with the IQs that students bring to the table. Thus, I’ve argued that rather than try to Close the Gap of about 1 standard deviation between Non-Asian Minorities and Asians and whites, our national goal should instead be to boost each group’s average performance by one-half standard deviation over current levels. That would have about the same total national improvement in test scores, and is far more feasible due to diminishing returns as you try to move from +0.5 sd to +1.0 sd.

KIPP charters are basically militaristic boot camps for hard-working kids with IQs probably averaging in the 90s. The idea is to get them away from the layabouts and troublemakers in regular schools and then drill them intensively in the basics. This isn’t going to turn them into the next John Updikes, but it likely will mean they will be employable in positions like, say, assistant managers of Walmarts and other jobs better than, say, hauling palettes around Walmarts, which is all they’ll be qualified for if they don’t learn to read and figure.


And, I'd add, all that can be taught by age 14, at which point there is no reason the future store managers can't just enter the workforce and start earning income and learning to be adults instead of diagramming sentences and studying Late Antiquity and the two World Wars over the next four years of high school.

As one commenter points out, even with the rigor of KIPP charter methods, the gains are barely above statistical noise. This is what we devote an entire federal department--duplicated down to the state, municipal and district levels--and the entirety of a human being's youth towards. And the whole thing is just a giant, artificial construct which barely accomplishes anything people wouldn't just handle on their own.

When productive society's money and patience for public education runs out, they'll walk away from the whole edifice and in one month nobody will miss a thing.
Email Post
Labels: education the bell curve

Anonymous said…
Kids learn more better in quality schools. Who would have thunk it.
August 29, 2014 at 1:04 PM