2.amount something deflects: the amount or distance by which something is deflected

3.act of diverting attention: the act of directing people's attention or criticism away from something


Just about any where I care to look--my Facebook page, my parish's coffee hour, work, family dinners, Internet blogs and, I'm sure, the local Hebrew temple, Protestant mega-church or anarchist book fair--I can find Americans debating the Israeli-Palestinian conflict. I must surely be the most disengaged, unfeeling human being on the planet for not actually giving a shit whether one or the other population drowns in the Mediterranean, finally settling things one way or another.

The Chief Kakistocrat notes how this conflict has captured the hearts and minds of the Evangelical Christian Right. Today, I focus on the Universalist, No-Man-Is-Free Left which, scrutinizing the particulars of the Israeli-Palestinian debate, is horrified to discover Fascism In America.


Sinclair Lewis once opined that if fascism ever comes to America it will be wrapped in the flag and carrying a cross. I was reminded of that comment when a good friend of mine recently wrote a letter to her local newspaper in Augusta Georgia decrying the killing of nearly two thousand Palestinian civilians in Gaza, describing the deaths as part of “the systemic erosion of the rule of law in our nation and across the globe” since 9/11. A devout Christian, she concluded how from her perspective “The world, it seems, has lost its moral compass.”

Unlike many letter writers, my friend has the life experience to back up her opinion, having served twenty-seven years as a United States Army lawyer, retiring as a Lieutenant Colonel. Much of her most recent work has involved the cases of Guantanamo detainees. [Distinguished, indeed. How many paper cuts and stapler jams did this warrior endure over her venerable career?]

It would have been reasonable to assume that my friend’s letter would elicit a variety of responses, and one might have expected that there would be at least some agreement that a world in which killing and wars have become the norm is an unwelcome aberration. But it was not so. Out of the more than one hundred comments the vast majority were violently and caustically opposed to the principle that Israel and the United States have not exactly been role models for a peaceful world. Many of the comments were both personally insulting and, frequently, highly offensive. Some of the remarks clearly came from military veterans while others had a Christian context.

Regarding the genesis of the recent conflict in Gaza the good folks of Augusta Georgia saw it this way, frequently using the same expressions, suggesting a common source either in the media or through networking with other like-minded individuals [which, inexplicably, is still not illegal]:

•“Hamas started using the rockets and tunnels in violation of rules of war long before Israel reacted.”
•“…it was Hamas firing thousands of missiles at Israel from Gaza that triggered the Israeli counter attacks.”
•“…doesn’t mention a single time the illegality of Hamas launching rockets DAILY against Israel, not just in War! This war is a direct result of Hamas’ daily attacks on Isreal (sic) l!!!”
•“Hamas would gladly kill, without reservation, every living Jewish soul on the planet. That is their goal, after all.”
•“Why did Israel move into Gaza? Because they were being attacked with missiles from there.”
•“Hamas set up rocket caches, tunnels, command and control HQ, and rocket launching sites in and under schools and hospitals ‘run’ by the UN.”
•“Israel has been negotiating with terrorist groups that want to destroy them since 1948…Hamas [is] continuing this barbaric, unprovoked assault on Israel…”

Every story of course has a beginning and end. Where one chooses to begin is critical. [Abraham? Joseph? The land of Goshen? The Canaanites? 70 A.D.? Alexander the Great? Augustus? The Ottomans? Sykes-Picot?] All of the commenters are wrong because they see a poor beleaguered Israel with missiles raining down without considering what preceded that development. Israel, a regional military superpower, has been occupying Arab land by force of arms since before the foundation of the country in 1948. [Like, since 1920 A.D., the dawn of history.]] Even though it has no soldiers permanently stationed in Gaza it occupies the territory by controlling its borders [Yet another hater refusing to deal--there are no borders visible from space.] as well as any and all access to it. It periodically attacks “targets” in the strip, killing Palestinian civilians...

Read the rest for yourself. Then read Krauthammer, Friedman or the folks at PJMedia to get their take on Who Started It. Then, for balance, read Juan Cole or the increasingly unhinged Paul Craig Roberts. Pop over to venerable Old Lefty and ashkenazim James Howard Kunstler's site, and prepare to be surprised (or not) over his Israeli nationalist bona fides.

The merits of the debate interest me far less than the fact that the positions of those awful Sarah Palin-types so illumine a retired Army paper-pusher in Shitcreek GA that she can deduce the connection between opposition to the Palestinian cause and the very Devil himself materializing in Georgia. Mr. Giraldi even included a picture so we can view for ourselves what Great Evil is afoot in the land: 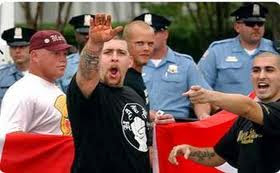 Israelis kill Palestinians who but for their appallingly low human capital, would surely be sending attack jets in the other direction, and yea verily, the rule of law hath disappeared from American soil.

Over at Unz.com, Reason.org and LewRockwell.com, libertarians wet their pants over the interminably disputed police shooting of a bully and thug in Nowheresville MO who wouldn't have produced a dime in net production his entire life. Do libertarians (a collective notable for their being whiter than Augusta National) seriously worry about being tailed by white, crew-cut policeman as opposed to dead-eyed, high-T yoofs with their pants halfway to their knees?

Conservatives screech that we must send our best and bravest to fight in Middle Eastern deserts because we face an existential threat from barely literate Muslims 6,000 miles away. Simultaneously, anybody who suggests we consider not letting in over a million people a year and that maybe those crack troops are needed in the US Southwest where drug cartels are taking over national parks obviously has the Zyklon-B already stockpiled. (See above picture).

Across the ideological spectrum, Americans must be badgered, hounded, shamed, deflected toward noticing everything but their complete disenfranchisement in their own homeland.
Email Post
Labels: anarcho-tyranny angry white guys lies and the lying liars who tell them

Toddy Cat said…
"a world in which killing and wars have become the norm is an unwelcome aberration."

Do Giraldi and his alleged Army Coloneless friend actually know any history, or is their hatred of Israel just self-enstupidating? Killing and wars have always been the norm, and anyone who thinks about it for a moment knows this. What is going on is Gaza, nasty as it is for those involved, is weak beer, historically speaking. Stalingrad, anyone? Dresden? The Somme, with fifteen times the total death toll of Gaza in one day? St. Bartholomew's Day? Cannae? The list goes on.

Your Kakistocracy said…
TC, I can't help but to imagine that some of the hyperbolic teeth gnashing over Gaza isn't really a strain of weaponized sophistry, and not idiotic at all in its calculated intent.

Jews have been deploying this technique with enormous success for ages, and it seems hardly likely that their opponents wouldn't have by now copied the tactic.

I think most of our goyisch kopfs are natively oriented to a fair and sober assessment of facts. It's startling to many the first time even mild assertions of national sovereignty and survival are received with hysterical denunciations of Racist! Nazi! Anti-semite! Hitler! Holo!

This, of course, throws most neophytes into spasms of apologia and defensiveness, precisely as is its intent. Their entire point ends up lost in backtracking and qualifying.

It's not a tactic for arriving at a point closest to the truth. It's a tactic for winning. And winning is something we better start giving grave consideration toward. I may be totally wrong in speculating on intent, but it seems likely enough to me that Israeli butchers! is at least partially an example of creating a hostile narrative against the masters of the craft.
August 27, 2014 at 11:46 AM

Toddy Cat said…
The problem with "Israeli Butchers" is that, putting it in historical context, it isn't really true, at least no more than "German Butchers" or "British Butchers" or (your nationality here) butchers, and I still have a taste for the truth, and I have my doubts about the value of "noble lies", and "narratives" no matter how well intentioned. Giraldi's line won't work, because people are stupid, but they are not THAT stupid, and they can't help but think, "damn, what would I want my country to do if a bunch of kill-crazed ragheads were shooting rockets at me?" and of course the answer is obvious. I guess that we'll just have to agree to disagree about this, Kak.
August 27, 2014 at 12:39 PM

Your Kakistocracy said…
people are stupid, but they are not THAT stupid

TC, that much unfounded optimism is going to get you killed one day. Though in seriousness, I don't know that we disagree on anything beyond degrees. My points were that there may be forces at work in Giraldi's writing beyond mere stupidity, and that narratives are very powerful.

In fact, I would assert that narratives are more influential in human affairs than truth as a general rule. Though that can be debated in good faith.
August 27, 2014 at 4:19 PM

Anonymous said…
I'm with you AG. I cannot see how we can possibly have a dog in that fight. It does make me stop and wonder why we have been bombarded and bored by the news about this conflict forever. Well, at least since I was a kid, and I am way down the downhill side.
August 29, 2014 at 7:26 PM