That's essentially what Malcolm Pollack thinks of Obama. Not being taken seriously by intelligent men is a real red flag, and public figures should heed it. Of course, outside the broad circle of people whose employment depends on keeping him happy, Obama's only contact with the public is going to be carefully stage-managed affairs in front of true believers. That's how most elected officials are treated, where they've got adequate staff to make sure that's all they see. 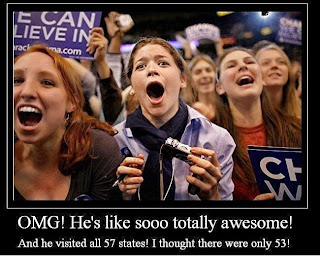 Somebody on Vox Popoli wondered what Obama's meetings must be like these days, and I agree that would be really interesting. What is he thinking? What are all these clueless Baby Boomers thinking? The Ashkenazim they know who all vote Democrat and contribute to NPR are liberal ex-hippies, but Israeli Jews all cling to their guns and religion. Obama is steeped in anti-colonialism and the civil rights movement, but other than sending back a bust of Winston Churchill and a perfunctory victory lap of Africa, he hasn't promoted any blacks to high-level positions, other than brown-paper-bag test-passer, Eric Holder. He actually seems most relaxed and comfortable around white women. 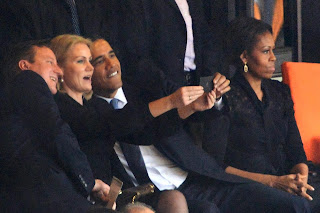 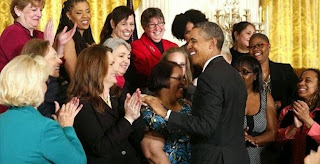 Think how strange this all must seem to this former adjunct law professor steeped in 60's Cultural Revolution dreck. White, Christian imperialists are supposed to be the root of all evil, and yet all these non-white Muslims in the Middle East are chopping each other's heads off. Free Palestine! is one of the Left's most venerable canons, but the Arab Sunni gazillionaires in the sheikhdoms don't give a single rat turd about their ethnic and creedal kin. I'm sure he's similarly nonplussed by Russia and Ukraine. First, they're white people who don't speak English or French, and second, why would white people pause in their unremitting oppression of people of color to kill each other? Again, all Obama knows of "white people" are clueless liberals like his mother and the people who helped grease the skids of his political career.

This is hardly unique to Obama, of course. There are a lot of people caught up in these backward-looking paradigms, as with Christian clerics worried about the poor, orphaned chimneysweeps and Central American ninos making the long, arduous trek through the Mexican Desert. And New Yorkers horrified at the ethnic cleansing of black people in the South, what with all the lynchings and unprovoked shootings.

The world is run by clueless buffoons. Given how history keeps repeating itself, I am forced to conclude I couldn't do any better.

You aren't maliciously trying to destroy western civilization. Thus, I am forced to conclude you could do a better job than our deprave ruling class.
August 5, 2014 at 12:45 AM

The Anti-Gnostic said…
There is a not-old saying: don't just do something--stand there!

In response to the previous post on the religious needs of the left half of the bell curve, it has long been my belief that the Mormon Church is the future of American Christianity. Born and raised Greek Orthodox, it pains me to say this, but our church has degenerated into a social club for aging Greek immigrants and spiritual tourists. The Mormon Church, in contrast, provides a strong community, material help, and patronage for it members. Mormon families have the highest fertility rate in the US (over 4, last I checked) because the Church allows young couples to get married early and have kids right away. The church sends older women to help young mothers with housework and emotional support. The church helps young men find work. In short, the are capable of organic growth, not just obnoxious proselytizing (although they do that too).
August 5, 2014 at 3:02 AM

fnn said…
When Free Palestine! was a New Left mantra the Palestinians were led by secular nationalists and Marxists-some of whom(e.g.,George Habash)were at last nominal Christians.
August 9, 2014 at 12:05 PM