James Howard Kunstler comes in from the cold


A few things that progressives leave out of the story these days: immigration was rigorously controlled at its ports of entry, and particularly at the height of immigration between the 1880s and the 1920s. A lot of people may have been pouring in from foreign lands, but they were carefully scrutinized on the way in, and not a few were sent back. Secondarily, these immigrants were required to assimilate into a recognizable common culture. There was no handwringing over the question of whether children from Italy or Lithuania should have to learn how to read, write, and speak in the English language. A strong consensus required it of them, and it must be fair to say that most of them were eager to enter that new common culture. We also conveniently forget that immigration quotas were severely restricted in 1924, not out of meanness, as the sentimentalists would suppose, but because the public and its representatives correctly apprehended that the situation had changed in some of its obvious particulars, requiring a consensus about limits.

In the 21st century, The USA is no longer sparsely populated, except in the regions that are typically hostile to settlement anywhere else in the world — places where there is no water, or too hot, or too cold, or too swampy. North America is a settled continent at a moment in history when virtually every nation including the USA can be fairly considered over-populated. It is also too obvious to belabor the point that fossil fuels have produced an algae bloom of human reproduction and that, whether we like it or not, the decline of fossil fuel is certain to lead to a decrease in human population. The question is how disorderly and cruel that journey might be if we don’t make the management of contraction a supreme political priority. And managing the movement of people into this country is a necessary part of that.

Currently, progressive America is pretending that the conditions of the 19th century still prevail here — boundless material resources and land for the taking — and that we can happily accommodate the overflow from our equally overpopulated neighbors, Mexico and the countries of Central America, any way they can manage to get here. The sentimental approach as represented by The New York Times, is exactly what will prevent the kind of hard choices that national leadership is faced with. Both established political parties could founder on this issue.

There is a bubble in everything right now (via Ad Orientem), as worldwide central banks print money like there's no tomorrow. The US, with its global armies and reserve currency status, is sucking up huge amounts of global labor and capital, including Central American teenagers who want more options than their villages and favelas can provide. This is classic bubble behavior, with the US sectors getting more than their fundamentals would otherwise merit, and other sectors starved of talent and investment.

Kunstler is muting his normally apocalyptic tone here. The government will dither and posture on this and it will eventually be decided on the streets, not in the voting booth or conference room. 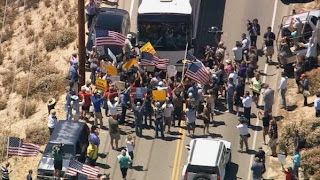 UPDATE: Holy crap, even LewRockwell.com is thinking this may not be such a good idea.

Lew lives in Auburn, Alabama, and I visited his Mises Institute about 15 years ago. It was a very nice, white college town when I was there last. So I'm wondering if it's gotten a bit more vibrant.
Email Post
Labels: immigration

Unknown said…
I pointed out years ago "libertarianism" makes no sense because if all property was privately owed there could be no mass immigration.
July 12, 2014 at 8:59 PM