He's had to delete two-thirds of this comment thread.


By the way, he should learn to write “Deirdre McCloskey,” (p.60) instead of “Donald-Diedre McCloskey.” LBGT rights remain a neglected issue outside of “the Left,” but they are a good barometer of our overall degree of tolerance as well as a desirable policy in their own right. I am not sure it is an issue Brat is so likely to be good on or to make a priority.

As Sailer points out, having won World War G, the Left mans the ramparts for World War T.

Specific to Tyler's comment, "tolerance" is not an end in itself. Manics will give you an impassioned list of reasons why you should give them money and otherwise indulge their whims. For the most part, we don't tolerate them; we prescribe treatment.

The line that LGBT rights are "a desirable policy in their own right" is pure throwaway. There is zero reason to award such a dysfunctional, marginal minority positive rights, and Tyler doesn't bother to give any.

Buried in the comment thread is the line that "the State should get out of marriage all together." This is half-right, and not in the way people think: the State cannot settle the question of which copulations merit legal recognition. Best to let such antithetical worldviews go their separate ways. Of course, that's actually the sexual deviants' worst nightmare, because without sufficient healthy, reproducing heterosexuals, they're a one-generation experiment.

What is it with these creepy old men suddenly deciding they're women? 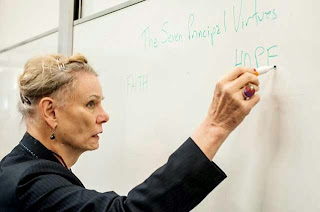 Bumbling American said…
If he keeps writing HOPE on whiteboards, he may finally turn into Judi Dench
June 16, 2014 at 1:18 PM