Catholic friend "Bumbling American" has requested comment on the Matthew Heimbach situation as discussed in Radix Journal here: "The God They Really Believe In."

Mr. Heimbach is one of the founders of the Traditionalist Youth Network, an openly white nationalist group, some number of whom are apparently Orthodox Christian converts. Mr. Heimbach traded blows with ideological opponents at a "Slut Walk" in Bloomington, Indiana. (It is of course hard to imagine a "slut walk" happening anywhere in Indiana other than the town that hosts a large, state-sponsored university.) Here's Matt, dishing it out (I'm not aware of any non-memed photos): 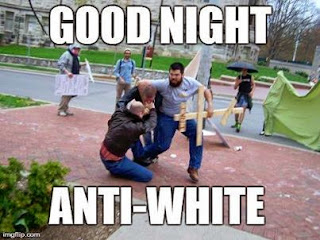 Orthodox bloggery was duly horrified, and apparently Mr. Heimbach has been excommunicated for his particular sins.

There is obvious irony here, given the Orthodox Churches' longstanding and close identifications with their host nationalities. I've previously posted on +John's patriotic plea for pan-Arabic solidarity. As an Antiochian bishop in Europe however, +John apparently took intensive English courses in order to minister to parishes in England, and Antiochian parishes in Turkey worship in the local Turkish, not Arabic (according to Fr. Andrew Damick). Clearly, the Church of Antioch honors and appreciates the God-created diversity of her flock as, apparently, does Matthew Heimbach, a white nationalist in a Church of Middle Eastern origin, answering to a Syrian patriarch.

These issues are not entirely strange to the Orthodox commentariat. Metropolitan Kallistos (Timothy Ware) does not seem to have a problem with national identity, nor does Athonite monk Patrick, as I've discussed here. I am frankly not aware of any Church doctrine which prohibits a people from drawing a line around themselves and insisting that they remain the dominant ethnicity within those lines. Most of the world is subdivided to a degree that deracinated Americans find incomprehensible. Is there really any compelling reason for Latvia, Lithuania or Estonia to have their own separate states? Belgium? Austria? Palestine? Wouldn't things be a lot more efficient if Canada and the USA merged? And Mexico? Instead, places like Armenia remain the land of the Armenians, Georgia the land of the Georgians, and on and on. The US and NATO went to war to make sure Yugoslavia could be broken up into its Serb, Croat, Bosnian, Kosovar and Montenegrin nations. It's quite fashionable for Tibet to remain Tibetan, just as we are all agreed that Israel gets to remain Jewish and the Lebanese get their own country instead of just being part of Greater Syria. Sojourners are obviously to be treated with courtesy and compassion pursuant to longstanding civilized custom. But I am not aware of any Church doctrine which compels any nation to actively pursue the displacement of its founding stock. Where does diversity come from, after all, but from people drawing lines around themselves? (If you want to stop certain conversations in their tracks, ask people where diversity comes from.) Heimbach apparently wants a "white" nation, presumably contoured along Anglo-European lines. Pardon me for not falling out of my chair, because that strikes me as much of world history to date. Propositional states run according to Masonic principles, like the US, are a modern experiment.

It is allegedly self-evident that Heimbach has committed some sin that has put him out of communion. But so far the only canon I've seen cited is St. Paul's verse, “There is neither Greek nor Jew, circumcision nor uncircumcision, Barbarian, Scythian, bond nor free: but Christ is all, and in all (Colossians 3:11).” Given the Church's support over the centuries for ethnic nations governed by hereditary monarchs, the context of Paul's verse is clear: there is no racial, ethnic or socio-economic qualification for membership in the Kingdom of Heaven. Period. The verse says nothing about the fact that there are Greeks, Jews, Barbarians, Romans and Scythians. There are also, apparently, slaves. Heimbach seems to have been excommunicated more for violating the American secular canon than the Christian one. What if an Orthodox Christian said he or she would not consider marriage to a person of a certain race--would that be a sin? Which sin?

There is a lot of talk in the Orthodox convertoblogosphere about authenticity. Present-day converts will never have the experience of Orthodox in their homelands picnicking in cemeteries and never troubling for an instance over which church is the Church. A Church Local, wedded to her nation, is not something to which one can simply convert. She is the end result of generations of extended family in an institution with a monopoly on Christian worship which baptizes, marries and buries in the true faith. We can strive as devoutly as we want, and we should, but in the present it is still just rote worship. We live in hope that our children and children's children ad seriatim will stay in the Church and after successive generations be the people for whom there is no other Church. For we in the present though, the "authentic" part will have to come later, as our spiritual bequest to our descendants. That's the difference between a mature Church, and a Church that's just one of any number of sects.

Given how things are proceeding in the World, with marriage and childbearing and everything else reduced entirely to individual preference, the behaviors of our progeny will be (we hope and pray) in striking contrast with their peers. They will act differently, think differently, and will have little in common with those outside their circle. This is how nations are birthed. You can start with as big an ethnic grab bag as you want, but the end result of assortative mating is still a group of people with common ancestry. This is what happens if we're successful by the way, because otherwise we disappear, or we hang on as another propositional denomination with a revolving door of middle-aged converts.

This sort of talk is of course completely alien to most American Christians, Orthodox or otherwise. For them, it's still 33 A.D. and we've got to roll up our sleeves and evangelize the pagan Empire. Surely, the thinking goes, when family, friends, neighbors, co-workers see our piety, our love, our enthusiasm, they will enter the parish doors by the dozens, thousands, millions! In the convert's zeal, it doesn't occur to him that everybody else--Baptists, Episcopalians, Mormons, Jehovah's Witnesses, Catholics--is telling himself the same thing. And so are the Muslims, Hindus, Jews and Buddhists. Contra Niche has remarked that Christian mission probably has a conversion-to-contact ratio well below ten percent. With those numbers, Orthodoxy would be better off taking every dollar and resource devoted to evangelism and instead directly subsidizing young, Orthodox families so they'll fill the pews with their kids and aunts and uncles and grandparents.

All this talk about Local Churches, kinship and inter-generational tradition gets uncomfortable pretty quick. Orthodox converts falling over each other to condemn Heimbach certainly want their "smells and bells" street-cred, but being secular Americans first and foremost, they also want what Laurence Auster termed the unprincipled exception to their rock-ribbed creed. Auster was of course skewering the liberals' escape hatch from their categorical imperative of blank-slate egalitarianism. For example, people are just people, except when I'm shopping for housing in super-majority white/Asian school districts. Or when I'm gentrifying my hip, white enclave in Brooklyn for crafting artisanal chocolate that nobody in pre-gentrified Brooklyn could ever afford. 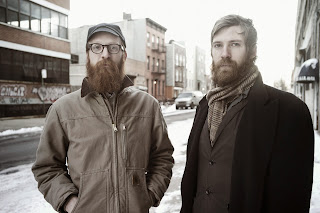 Are these guys Orthodox?
Thus, with American Orthodoxy, erstwhile traditionalists such as Rod Dreher want the local community, the kinship and the inter-generational tradition, but they also want the unprincipled exception in order to remain in good standing with their universalist, progressivist, homosexual and feminist friends. When an Orthodox such as Matthew Heimbach acts positively in support of traditional values like the Orthodox Christian faith and pro patria, as opposed to writing blog posts, he finds himself in violation of the American conservative's unprincipled exception. All sorts of sexual deviancy, the monsters we abide in our midst, and every other manner of social pathology passes unremarked, but get yourself accused of racism and even Rod Dreher will be bestirred to tell you that you are going to hell.

The Radix essay is worth reading, though obviously penned from the perspective of someone outside the Church. I have not added much here.
Email Post
Labels: anglo-america angry white guys multiculturalism Orthodoxy

August said…
This is a travesty.

It is as if they are desperately trying to prove to me that under no circumstances should I believe in their authority.
I daydream of having money, lands, etc... and finding a bishop who checks with me first before he opens his mouth- and has his priests send me the homilies for editing.
Assuming I ever have children, this will be necessary. They can't behave without Constantine breathing down their necks.

Toddy Cat said…
"I'll never understand how anyone can like Rod Dreher."

Bumbling American said…
Thanks for a terrific post. Clutching my rosary and collecting my thoughts...
May 12, 2014 at 1:36 PM

Chris Jones said…
I mean, what religion is he this week?

He's Orthodox this week. He has been Orthodox for eight years.

How long does he have to stay Orthodox before people stop asking pinhead questions like that?
May 13, 2014 at 1:59 AM

Mildred said…
I am mystified by the unkindness of so many Christian commentators towards Rod Dehrer. I find him interesting and perceptive
May 13, 2014 at 3:44 PM

Bumbling American said…
From the Catholic side of things: The sense I get from the pulpit and the Vatican is that Euro/American Catholics are being preached *at*, while the Global South is being preached *to*. We (the Euro/Americans) must welcome, we most accommodate, we must change to meet the new realities, etc. Whereas the Global Southerners are, by implication, sacralized as the transmitters of those new realities. There's no call for reciprocal respect or understanding, let alone forbearance about moving to somebody else's homeland and disrupting it in a dozen ways. We're all one big happy ecclesiastical family, but some of the drunken cousins get more slack than everybody else.

Looking at it cynically, the Church needs checks from the First World and warm bodies from the Third; the easiest way to achieve that is to guilt the wealthy into handing over money and pitying the poor immigrants (as the line goes) who are now crowding the pews.

Bert said…
"I am mystified by the unkindness of so many Christian commentators towards Rod Dehrer. I find him interesting and perceptive"

Good for you. I find him to be a pitiful loser and a wimp who constantly apologizes for everything he supposedly believes in in order to stay in good graces with the Left to keep his career options open.
May 13, 2014 at 4:39 PM

lannes said…
When you see how relentlessly that
fountain of evil known as Hollywood pushes interracialism, you know it can't be a god-pleasing thing.
May 13, 2014 at 5:07 PM

Porter said…
I just took a moment to belatedly digest this essay and wanted to remark on what a fine and thoughtful piece of writing it is.

The Anti-Gnostic said…
Thanks for the kind words Porter.

I have floated various chunks of this in several Orthodox comboxes. Most of the time they don't make it through moderation. If they do, they're a conversation-stopper.

Let's say you evangelize a country enough that anybody genuinely interested knows where to find you. This is actually the situation in America. The question asks itself, what then?