Not actually as bad as Pat thinks

“There is a gay mafia,” said Bill Maher, “if you cross them you do get whacked.”

Maher, the host of HBO’s “Real Time,” was talking about the gay activists and their comrades who drove Brendan Eich out as CEO of Mozilla. Eich, who invented JavaScript and co-founded Mozilla in 1998, had been named chief executive in late March.

Instantly, he came under attack for having contributed $1,000 to Proposition 8, whereby a majority of Californians voted in 2008 to reinstate a ban on same-sex marriage. Prop 8 was backed by the Catholic Church, the Mormon Church and the black churches, and carried 70 percent of the African-American vote.

Though Eich apologized for any “pain” he had caused and pledged to promote equality for gays and lesbians at Mozilla, his plea for clemency failed to move his accusers. Too late. According to The Guardian, he quit after it was revealed that he had also contributed—“The horror, the horror!”—to the Buchanan campaign of 1992.

That cooked it. What further need was there of proof of the irredeemably malevolent character of Brendan Eich?

"Mozilla" has a complicated corporate structure. From Wikipedia:

Mr. Eich was apparently escorted out of Mozilla Corporation by the head of the Mozilla Foundation, Mitchell Baker: 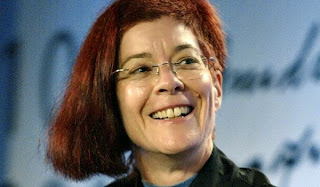 The Mozilla Foundation is non-profit, which means it's a business that doesn't have to pay taxes. Businesses that don't have to pay taxes can get away with all sorts of things, like having batshit-crazy lesbians as their chief executives. If Mozilla had to pay taxes, it would lose its advantage in the marketplace and have to hire some non-pathological individual to run things instead.

And that is all that is happening here: a cloistered, non-profit foundation has been taken over by homosexuals so the straight men are leaving or being driven out. It happened with the Episcopal Church. It happened with Broadway. It's happening in, of all places, the AKC and the US military. Mozilla will become increasingly radicalized and dysfunctional, because that's what happens when pathological people take over an organization.

Eventually, nobody in their right mind will do business with Mozilla. It will be an insane organization run by and for the insane, supported (if at all) by rent-seeking and transfer payments. When Mozilla runs out of externalities to support itself, it will either re-tool and get the straight guys who invent and maintain things back, or it will disappear.
Email Post
Labels: the culture war the doom loop

I've come to the conclusion that much of the Education-Industrial complex exists purely to facilitate the creation of these kinds of untaxable quasi-monopolies. As "non-profit" organizations, universities can create all kinds of wholly-owned corporate subsidiaries that compete in the market with "real" corporations, but are exempt from most of the taxes and regulations that burden them, with obvious competitive advantages. The profits made by said companies can't be directly paid out to the school's trustees as if they were stockholders, but the money still gets used to build up the school's prestige and influence, which benefits all those affiliated with the school in a general, indirect way.
April 8, 2014 at 3:33 PM

Anonymous said…
Maher speaks with the immunity that only a true outfit can guarantee. Rick Sanchez.
April 11, 2014 at 2:03 AM