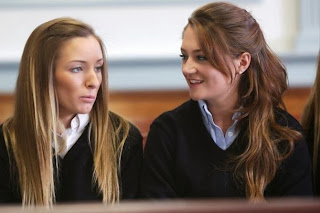 
A northern New Jersey honor student who has sued to get her parents to support her after she moved out of their home had her initial request denied Tuesday by a judge who cautioned that the case could lead to a "potentially slippery slope" of claims by teenagers against their parents.

Rachel Canning had sought immediate relief in the form of $650 in weekly child support and the payment of the remainder of her tuition at Morris Catholic High School, as well as attorney's fees.

State Superior Court Judge Peter Bogaard denied those motions but ordered the parties to return to court on April 22, when they will present evidence and testimony on the over-arching question of whether the Cannings are obligated to financially support their daughter. Rachel Canning, a high school senior, has already been accepted by at least one college and is seeking to have her parents pay some or all of her tuition, attorney Tanya Helfand told Bogaard Tuesday.


This "teen" is a legal adult. She is good-looking and smart and has tons of options. I'm not sure what exactly is up for debate in further proceedings. However, if this lawsuit is successful I would like some serious re-thinking of the voting age in this country.

Why does our society keep extending juvenescence further and further past sexual maturity? It seems to result in a huge disconnect with psychological maturity--children in adult bodies.
Email Post
Labels: biology culture

The Neutralist said…
"Why does our society keep extending juvenescence further and further past sexual maturity? "

John (Ad Orientem) said…
I vaguely recall reading somewhere years ago that NJ had a crazy law that actually required parents who had the means to pay for their kids' college education. If true she may actually have legal standing. What an insane world we live in.
March 5, 2014 at 11:20 AM

Anonymous said…
High school is the main cause of extending childhood. Virtually nothing taught there is useful, yet students are required by law to endure it. When they reach legal age, too many lack the life experience for adult living because they've spent so much of their formative years cut off from the outside world.
March 6, 2014 at 2:56 PM

Aaron said…
High school is the main cause of extending childhood. Virtually nothing taught there is useful, yet students are required by law to endure it.

Agreed. I hindsight, education appealed to my intellectual vanity but really just sucks up a lot of time and energy without preparing for adulthood.
March 9, 2014 at 2:32 PM

Anonymous said…
I wonder if I could sue my mom for beating me over the head with her sandal when I was a kid?

Of course you can.