God rest the soul of His servant, +Philip 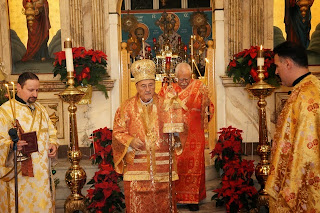 The old lion passes away.


...ONE, Despite the vitality and the dynamic nature of Orthodoxy in North America, no member of SCOBA, not even the chairman of SCOBA, was consulted about what was discussed in Geneva. We received rules from our brothers in Switzerland which we have nothing to do with. We have been on this continent for more than two hundred (200) years. We are no longer little children to have rules imposed on us from 5,000 miles away. Orthodoxy in America has its own ethos. We have our own theological institutions, and we have our own theologians, authors, publications and magazines. We do not intend to be disobedient to the Mother Churches; we just want to dialogue with them and give them the opportunity to know us and understand us. We have been here for a long, long time and we are very grateful to the Almighty God that in our theology and worship, we do express the fullness of the Holy Orthodox faith.

We are faced now with a very serious procedural nightmare. We are, supposedly, here to discuss a new organization to replace SCOBA. The question is: Was SCOBA dissolved and if so, by whom? And when?? SCOBA has a constitution which is fifty years old. If this constitution has to be amended, let us then amend it according to correct procedures. No one can dissolve SCOBA except SCOBA itself. SCOBA has organized Bishops’ Assemblies before Chambesy told us to do so. The first Assembly was held at the Antiochian Village in Ligonier, Pennsylvania in 1994, under the chairmanship of our brother, Archbishop Iakovos, of blessed memory. The second Bishops’ Assembly was convened in Washington, D.C. and the third Bishops’ Assembly was convened in Chicago, Illinois, both under the auspices of SCOBA and the Chairmanship of His Eminence, Archbishop Demetrios.

TWO - The second point which I would like to note is concerning the term “Diaspora” which was used several times in the literature which we received from Geneva. I remember, there are many of you who were at the Antiochian Village in 1994 and should remember that the term “Diaspora” was unanimously rejected by our assembly. We are not in Babylon; we are in North America, the new world. We are dealing here with second, third, fourth, fifth and sixth generations of American Orthodox and they refuse to be called “Diaspora.”

I believe that some of our churches in the Old World are in “Diaspora.” In Jerusalem, for example, we have 2,000 Orthodox Christians left. In Constantinople, the glorious capital of the Byzantine Empire, I was told that there are only 2,000 Greek Orthodox left. And the Turkish Government, until now, refuses to let us open that famous Theological School of Khalki, despite the intervention of the presidents of the United States. In Iraq, hundreds of Christians were slaughtered and thousands had to flee Iraq to the Syrian Arab Republic. We are free here in North America -- free to teach, free to preach, free to worship, free to write books and sometimes criticize even the presidents of the United States. We have the full freedom of expression in accordance with the United States Constitution. It is important to note here that the Holy Synod of Antioch, to my knowledge, never discussed the Chambesy decision and the rules of operation in order to formally bless this effort.

THREE - Some of the communiqués which were issued by the fathers in Geneva were good. I don’t understand, however, why Central America was joined to North America. The Antiochian Metropolitan of Mexico and Central America informed me that he wanted to be with the Orthodox Bishops of South America. The reason is: he has nothing in common with North America because he represents a different culture all together. As a matter of fact, he traveled to Brazil to attend the Bishops’ Assembly which met at the Antiochian Orthodox Cathedral in Sao Paulo.

If I have a vision for the future, it is this: Jerusalem has less than 2,000 Orthodox left. Istanbul has 2,000 Greek Orthodox left. The future of Orthodoxy in the Middle East is uncertain. Thus, for the sake of international Orthodox unity and Orthodox unity in North America, we should with one voice, beg His Holiness, the Ecumenical Patriarch to leave Istanbul and move to Washington, D.C. or New York City and head a united Orthodox Church in this hemisphere. All of us, I am sure, will be blessed to be under his omophorion and Orthodox unity in North America will cease to be a dream, but a reality.

If we do not bury the burdens of the past between certain autocephalous churches, such burdens will bury us, and Orthodoxy in this country and throughout the world will become an insignificant dot on the margin of history.


Blunt, heavy-handed and with a memory that ground both long and exceedingly fine, history will be kind to +Phillip.
Email Post
Labels: +philip antiochian orthodox

Ingemar said…
Most of what I knew of +Philip was filtered through the old Ochlophobist blog. CliffsNotes: It wasn't very kind.
March 21, 2014 at 1:53 AM

John (Ad Orientem) said…
Yeah, Owen had a visceral disdain for Philip and waged an online campaign against him that at times may have been over the top. I vaguely recall that in a later and typically long mea culpa post that dealt with many topics, he more or less conceded as much. But that aside, Philip WAS a controversial figure. He did incredible things for Orthodoxy in America, but he also pushed the envelope in a lot of areas that left a bad taste in people's mouths.