Enemy Of The People


It's the rich, says Porter. 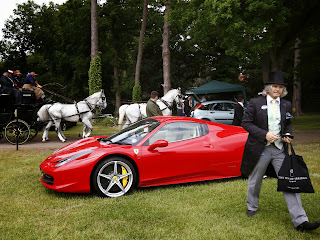 There is a strong classically-liberal ethos in the Anglo and European spheres which says we will allow you to make as much money as you want, and in return, you will not use your incredible wealth to screw the rest of us over.

Unfortunately the very rich, like the very poor, seemingly cannot help themselves. They must exploit every loophole in the tax code. They must park billions of dollars which rightfully belong to their shareholders in overseas banks. They must lobby for a cheaper workforce. They must fund "color revolutions" and "Arab Springs" which are really just advance payments to rival governors so their particular multi-national can be first out of the gate once the new government settles in.

The very rich do not care about building anything lasting beyond a leg up for their own progeny. They do not care if your neighborhood gets transformed into a barrio; their neighborhood will always look great. They are not loyal to the American, British, French or other nations; they carry their nation with them wherever they go. They don't cut their losses, pay down debt and tighten their belts; they get bailouts. Their companies don't extend forested space or actually reduce their ecological footprint; they just haggle over LEEDS certifications and carbon credits. You are just a consumer among a zillion other consumers whose aggregate transactions make them incredibly wealthy. Governmental relations are just another line item in the business plan.

In sum, the concerns of the very rich are no longer conservative causes, and the Republicans should abandon them.
Email Post
Labels: politics Republicans

Gyan said…
Inevitable working out of the 200 year old teaching that it is good to pursue self-interest and the invisible hand would take care of the rest.

The conservatives have been particularly energetic in preaching this message.SO they aren't going to abandon the rich.
March 24, 2014 at 1:50 AM

The Anti-Gnostic said…
I don't have a problem with the ethos. Everybody reading this has more than enough to live on, and I'm not comfortable with the idea of a third party telling me when I've got too much.

The deal is heartbreakingly simple: make your money, just do no harm. But the very rich can't manage even that.
March 24, 2014 at 7:39 AM

Gyan said…
"I'm not comfortable with the idea of a third party telling me when I've got too much. "

Yes, it is not comfortable. But, the point stands.

Greed, that is over-accumulation is one thing but the main thing I am interested is Do my acts conform to the good of the City?
Am I contributing to the beauty of my City?
DO my acts rebound to the glory of God?

As I say, the commandment to love my neighbor is not abrogated in commercial transactions.
March 24, 2014 at 7:48 AM

Porter said…
The deal is heartbreakingly simple: make your money, just do no harm. But the very rich can't manage even that.

Glen Filthie said…
It is the way of mankind, AG, and will never change.

Over on the other side you have Donks and Dhimmicruds saying we need to pay burger-flippers AT LEAST $15.00 an hour, that welfare recipients should get vacation pay, and so on. The rich are rich for a reason, and the poor are poor for a reason.

If we are skillful at pitting the forces against each other...sometimes something resembling morality results.
March 24, 2014 at 9:42 AM

Anonymous said…
They are not loyal to the American, British, French or other nations; they carry their nation with them wherever they go.

Northern Refugee said…
What neocon scum like McCain will never understand is that Putin is loved in Russia precisely because he tamed the oligarchs. The republicans are clueless to the fact that America's ruling class, political and economic, has lost all credibility. This is why typical republican jingoism and flag waving have failed to excite the masses. Not that I'm complaining; as long as the ruling class is an object of contempt, they will be unable to garner support for another bull**** war.

On another note, I used to give to local charities (mostly Toys For Tots and food banks). Little by little, I came to realize that I was subsidizing populations that, through their sheer mass (literal and figurative) and stupidity threatened to destroy my civilization. I still give to charity, but exclusively to medical research organizations. A-G, how do you reconcile Christian teachings on charity with the fact that, as you said, the modern poor personify the vices of the biblical rich. Without constant support, much to the underclass would simply die off; they have lost the basic skills required to sustain life. How would you, personally, deal with the mass starvation of our native underclass. I don't ask to be challenging, but because I am genuinely curious.
March 24, 2014 at 7:56 PM

The Anti-Gnostic said…
NR - I don't have a good answer for that. I think the answer that will happen will be the government conditions welfare payments on sterilization.

My priest has a rule: he will help a vagrant with our discretionary funds once. Show up a second time and you are told to leave.
March 25, 2014 at 8:32 AM

lannes said…
Politicians know that if they start sterilizing welfarites, the
latter will stop voting for them.
March 26, 2014 at 7:24 AM

Rev. Right said…
When a civilization has an elite that has completely disengaged their interests from those of the masses, it is going to suck for the masses. Of course, this is always the case, but as you have pointed out, one expects a little moderation in the beatings if you do your job well. However rapacious the robber barons of yore were, at least we knew we were their proles and they wouldn't completely replace us with imported coolies, at least just yet. So there was that.

But the playing field has changed quite a bit in the last half century or so. Our new elite has bought enough of the allegiance the poor (at quite a bargain price, and without having to use any of their own money) and has been able to keep the vast bulk of the rest of us completely clueless as to just what exactly the plan might be, to the point we are not even allowed to look at who they are. We are now required to applaud our own extinction, and, amazingly, we do.

Control of the narrative is everything. People will march right off the cliff into oblivion before they will question it. Just watch them.
March 29, 2014 at 3:06 PM