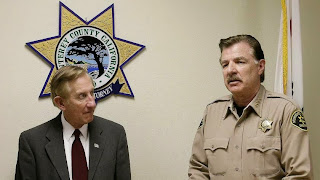 Monterey County District attorney Dean Flippo, left, and Monterey County Sheriff Scott Miller address a news conference, on Tuesday, Feb. 25, 2014, in Salinas, Calif. Six county officers, including the recently retired police chief and the acting chief, have been arrested in connection with a scheme to steal more than 200 cars from poor Hispanic people.

Who could do such a thing? From poor Hispanic people?


Tow shop owner Brian Miller, his brother acting police chief Bruce Miller and Sgt. Bobby Carillo were scheduled to be arraigned Monday on bribery charges after authorities said vehicles impounded from Hispanic immigrants were funneled to the tow yard then sold or given away.

Prosecutors said an undetermined number of vehicles were sold or given away for free when the owners couldn't pay fees to reclaim them. Two people at Miller's Towing in King City refused comment.

Former Chief Dominic David Baldiviez and Mario Alonso Mottu Sr. were set to be arraigned March 6 for embezzlement of a city-owned Crown Victoria. Officer Jaime Andrade, accused of possession of an assault weapon and illegal storage of a firearm, and officer Mark Allen Baker, accused of making criminal threats, are also slated for a March 6 arraignment.


Hopefully, when the old, white District Attorney Flippo and Sheriff Miller are retired in the next couple of months, a younger, dynamic breed of law enforcement will take the reins in Salinas and enforce the rule of law.
Email Post
Labels: multiculturalism