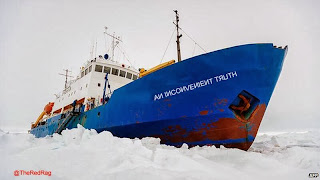 I saw this via Ad Orientem and didn't give it much thought but yes, that's exactly what happened. Australian academic and professional carbon-alarmist Chris Turney got a bunch of pals together for a chartered boat ride to the site of Sir Douglas Mawson's 1912 Antarctic expedition. Professor Turney probably figured that, with more CO2 in the atmosphere, the littoral waters off Cape Denison would surely be open, as they were in Mawson's day. 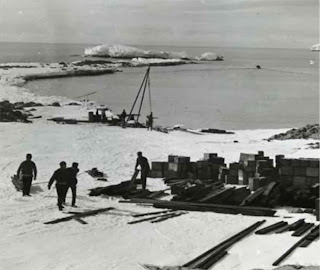 The learned Professor of Climate Change (there apparently is such a thing) who generates exquisite computer models of the planet as a burned-out husk by next century apparently saw no need to look at satellite imagery just keystrokes away which would have shown him that the Antarctic ice shelf has apparently expanded. It is summer in the southern hemisphere, this ice-reinforced vessel is trapped in several years' worth of sea ice and two actual icebreakers have failed to get within 10 miles. Incidentally, the team did make it to Cape Denison, by portage over the ice.

What a surreal atmosphere must prevail on the MV Akademik Shokalskiy. These supposedly learned, serious people encountered an ice pack which their ideology and computer models told them could not be there, and continued into increasingly hazardous conditions. Irony of ironies, since they predict 'climate,' not mundane crap like weather, they had to reach out for help from actual meteorologists, including one AGW skeptic. Now they are trapped and somebody else will have to pay for their dangerous and expensive rescue.

By the way, my first OP of 2014, and I hope everyone had a blessed Nativity and happy New Year.
Email Post
Labels: global warming lies and the lying liars who tell them

IA said…
Thanks for your post. I just read a long photo essay about this in the Washington Post and not a word, not a hint, about the professor's background.
January 2, 2014 at 5:30 PM