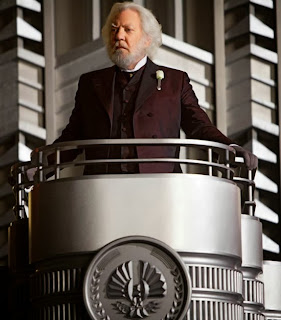 As an antidote to Lew Rockwell's delusions of good looking teen-aged gladiators and patriarchal Donald Sutherland inveighing from an Art Deco pulpit (NB: white/old-fashioned/Gilded Age = bad), here's what our internationalist overlords really have planned for us:

You know, tomorrow's International Women's Day, and on -- and it's a particularly important moment for us to recognize that there's just so much that we can do with our foreign assistance and with our development efforts around the world.

And it's easy for those days to come and go without adequate recognition, but I am so excited to be here, in part because when we -- when I joined USAID, it became very clear to me very quickly for President Obama and for Secretary Clinton and for this administration -- and, I would now argue, frankly, in a bipartisan way in Washington -- there is a tremendous amount of support for taking development far more seriously as the third leg of how America presents itself around the world. Diplomacy, defense and development together are capable now of presenting our values, our capabilities, our ability to avoid conflict and shape a more peaceful and more interconnected world, and our ability to reach out and touch some of the world's most vulnerable populations and do it with great American technology, spirit, willingness to serve and deliver outcomes that at the end of the day make us better and make us stronger.


This slide is a picture of protesters, of course in Tunisia, and you would note there was a reason the protesters in Tunisia were chanting "dignity before bread." It was because they recognized and they felt that they needed to have more open space to communicate, more right (towards ?) self-determination, and that if we defined development aspirations too narrowly, as just economic improvement or health improvement or whether people had access to an education, it somehow didn't capture the very basic and fundamental underlying human rights that they sought to fight for.

We've been excited to have the opportunity in Tunisia, in Egypt, in Libya, and in many other countries through the Middle East and North Africa to work aggressively with partners and to make sure that we reach local society -- local change agents. We support civil society organizations -- some you've read about, of course -- that work to expand access to democratic processes.

The president made a very strong commitment that we would stay firm in better aligning our long-term strategic interests in the region with our core and fundamental beliefs in self-determination and respect for basic freedoms, human rights and human dignity. And USAID is honored really to have the chance to be on the forefront of implementing that approach in very difficult and very important environments.

Human rights! Dignity! I mean, who could possibly oppose such things but a bunch of old, white, hateriarchal fascists?

And one of the major challenges that we have had in development, that we're trying to adapt and change as we enter this new era, is how we work with institutions and companies in the private sector. You know, many in our community still have a -- if not bad taste, at least a little bit of discomfort from early corporate activity that did cause significant harm to poorer populations in poor countries. Sweatshops, infant formula, Bhopal -- those are all words that conjure up images of corporations as predators, taking advantage of circumstances and a lack of controls.

But today, many of the best corporations have a much more enlightened understanding. They see that the fastest growing markets around the world are often very early emerging markets. They note that in sub-Saharan Africa there are 15 countries that have grown at 5 to 7 percent annually for about eight years in a consistent way. They see tremendous fortunes being made as people create products and services that can be sold on cell phones to even the most remote parts of the world and they see the outcomes that relate from that.

Just one example that I'd like to offer that I think is emblematic of our new way of working in this space is a partnership we were able to launch with Pepsi in Ethiopia. Pepsi will invest significant resources to reach 30,000 chickpea farmers -- and (I know ?) you say, well, why are you talking about chickpea farmers? -- and they'll reach 30,000 chickpea farmers as part of building out a business to produce both hummus for their commercial markets and to produce a high-nutrition, ready-to-use, high-protein paste that can be delivered to kids in -- at risk of chronic and severe malnutrition in and around the Horn of Africa.

Ethiopia's TFR is 4+ but they don't produce enough to feed their own children. Solution: K-selected taxes --> r-selected consumption of high-pro Pepsi-paste.

I'm sure there were some more gems in Mr. Shah's talk but that's as far as I'm bothering to read.
Email Post
Labels: prognostication the bell curve the doom loop

Where reality meets policy, local change agents drag well-meaning goofballs like Rajiv Shah out of their burning offices and strangle them.
December 14, 2013 at 9:04 AM

Jason said…
Of course, scant talk of USAID/Intelligence agency cooperation on covert matters. That is what lies under the blanket of good vibes that Shah decribes; just more illusion and excellent pretext for continued involvement abroad.
December 17, 2013 at 9:44 AM