That's apparently the worst that Miami Dolphins' rookie tackle Jonathan Martin got told by veteran guard Richie Incognito, along with other indignities.

Welcome to the NFL, home to an active roster of 1,440 of the biggest, strongest, most physically aggressive men on the planet. Sports talk-radio in my town was reeling over this story today, but the listeners who called in seemed a little more relaxed about it.

This is Jonathan Martin, number 71: 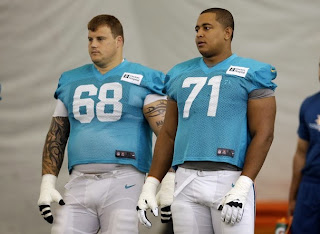 Martin's a big, strong guy who could kill me barehanded if he was so inclined, but I live in a comfortable, white-collar world and he lives in the NFL. Martin has a soft visage for a man who lives among predators. Martin went to Stanford as well. Logical-mathematical intelligence is not necessary for success in professional athletics. It's actually a handicap.

Up there next to Martin is Richie Incognito, number 68. Here's Richie, handling things: 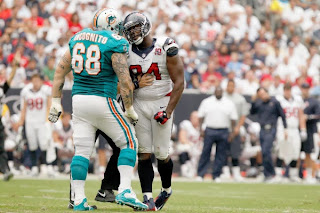 Richie is no outlier. He's a solid member of the Dolphins football squad. He's on the team's leadership council, an alpha of the alphas. Martin, by contrast, is a geek; a big, strong geek but still a geek. The rest of the offensive line didn't think Martin fit in the fraternity either. The final straw for Martin was when the offensive line all got up and walked away when he tried to join them for lunch.

That's the big, tough world among big, tough men. Geeks in that world, like the Manning brothers, learn to sublimate their geekiness and get all their big, tough teammates to focus their aggression on blocking for them. Warriors, like Richie Incognito and Harvey Dahl, learn to sublimate (barely) their berserker tendencies to make plays happen.

Speaking of Harvey Dahl, he was cut by the Atlanta Falcons because urbane, dilettantish men like Thomas Dimitroff and Arthur Blank make the personnel decisions for the team. Consequently, the Atlanta Falcons will never control the line of scrimmage.

The culture that a cloistered group of high-T, physical men are going to generate is going to be frankly uncivil. Of course, they live in the middle of civilization so they have to keep their uncivil rituals to themselves. Incognito's transgression was not calling a teammate a half-n****r and threatening to s*** in his mouth, Incognito's transgression was breaching his fraternity's omerta, allowing the hazing ritual to be seen. I can assure you all that and worse gets said among members of the Special Forces, national rugby sides, Korean riot police locker rooms and any other physical, all-male environment. NFL culture is gladiator culture a/k/a prison culture, and in more ways than people like to think about.

Aaron Hernandez is a warrior, and he really does belong in prison. He definitely has a predatory look. I'm surprised he wasn't a linebacker instead of a tight end. 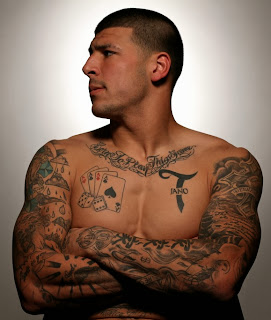 Here's Hernandez's girlfriend. She looks even more predatory than he does. 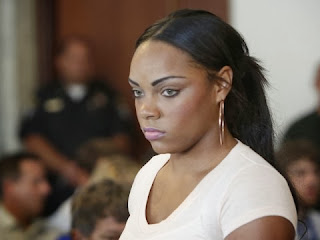 Feminized society, which is gnostic society, is horrified by such biological realities so when something like this little tiff between Martin and Incognito comes up, they cluck and scold and demand rules to legislate reality out of existence. When something really serious happens, like when a 14-year old being raised in a nice neighborhood going to a nice school slashes his teacher's throat and dumps her body in the woods, feminized society can't deal with it at all. National media doesn't report it, people don't talk about it. Feminized society's pop culture doesn't even like to depict real villians any more; they're all space aliens or zombies.

That's how I know feminized society is eventually going to end. It gets all worked up over things like Martin and Incognito, but has no way to deal with actual, existential threats. When a genuine threat arises (and it always does), like an epidemic or foreign conquest or domestic warfare, feminized society will get rubbed out or pushed aside.
Email Post
Labels: football popular culture

Steve Johnson said…
The worst part of this is the emasculation of all the guys who know better and should say something but are afraid to speak up.

I try to avoid watching any non-game content but they discussed the matter during the MNF game. Gruden looked like he really wanted to say something but had his balls chopped off.

But I guess that's part of the point - Dalrymple's quote about communist propaganda making everyone an emasculated liar and all.
November 5, 2013 at 7:30 PM

Gyan said…
Is it a fact or speculation that being a sociopath is biological?
Or that the sociopaths can not reason (i.e. they are NOT rational animals and basically just animals)?
November 5, 2013 at 11:25 PM

The Anti-Gnostic said…
Like most pathologies I'm guessing there's a spectrum.

I think it's innate. Some people are just bad people. Phillip Chism was only 14 years old and living in a middle class neighborhood, going to a good, close-knit school. Made absolutely no difference.
November 6, 2013 at 6:14 AM

The Anti-Gnostic said…
We can, but a sure diagnosis is above my pay grade.

Jason said…
^ Just as much as we are, only India doesn't couch it with Christian language.

SFG said…
I suppose if all the other guys around you are bigger than you, the fact that you can rip a normal guy's head off isn't much comfort. The whole geek-jock dynamic can repeat itself even among guys who are, by all reasonable purposes, jocks, because it's a relative, not an absolute.

You can see this in the other direction too--I went to math camp, and the one guy who had gotten a black belt in karate and was marginally more masculine than the rest of us got all the girls.
November 7, 2013 at 7:25 AM

Anonymous said…
Excellent post and something I have been contemplating in recent weeks. Please post more as examples arise.
November 8, 2013 at 9:16 AM