Actually, the book's title is The XX Factor: How Working Women Are Creating A New Society, and I don't actually review it. 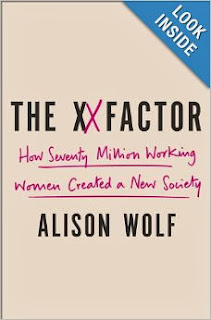 Ms Wolf could have saved herself considerable trouble had she simply titled her book: Supply and Demand: How Seventy Million Working Women Created a Lower-Paid Society. With a few simple graphs, she probably could have wrapped the whole thing up in less than 10 pages.

I always find it remarkable, and perhaps even a little depressing, how few people are able to grasp that the primary consequence of the addition of 70 million working women, all of whom were already consumers, to the labor force, could never have been anything else but to lower wages.

One can debate whether female workers are more or less productive than male workers, and one can certainly debate whether the societal effects were beneficial or negative, but the one thing that cannot be denied, on logical, theoretical, historical, or empirical grounds, is that the post-1950 doubling of the female labor force has had a severely depressing effect on American wages.

In 1967, the median household income in inflation-adjusted dollars was $42,934. In 2007, it was a little over $51,000 despite the fact that worker productivity since around 1970 has approximately doubled. In other words, the U.S. middle class hasn't gotten a raise in four decades. 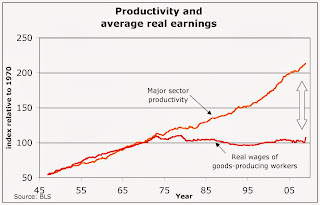 What happened? I'll put it as succinctly as Vox did:  women and immigrants.
The lost opportunity cost of women entering the workforce as wage-slaves as opposed to staying home to nurture their children is substantial. We can measure at least some of it financially: around $9,000 to $14,000 per child per year.

Here's a rather harrowing account of what it's like to grow up in the household of a mother devoted to her career. (Via The Spearhead).
Email Post
Labels: economics feminism hatefacts immigration iron laws

Anonymous said…
I appreciate this will sound petulant, but "wage-slave" is a term that the left uses all too freely. Cases of slavery are legion, but they aren't generally associated with freely-earned wages, however miserable they be.

The Anti-Gnostic said…
Thanks for commenting, and point taken.

I think 'wage-slave' fits because the two-income lifestyle is actually a trap. The lower earner is just paying the taxes and childcare.
October 10, 2013 at 7:51 AM

Carnivore said…
Yes, I see so many of these cases at work. Being an engineer, I witness the male half of the equation. The fathers are frazzled at work AND at home. Balancing the husband's and wife's schedule, paying a fortune for day care. There is no peace at home.