1. Range of Homo neanderthalensis. Peoples of non-African descent have from one to five percent Neanderthal DNA in their genetic makeup. 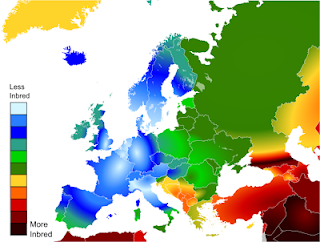 Christian canon law followed Roman civil law, which forbade marriage within four degrees of consanguinity. This mandate has persisted among Christians of the Middle East. 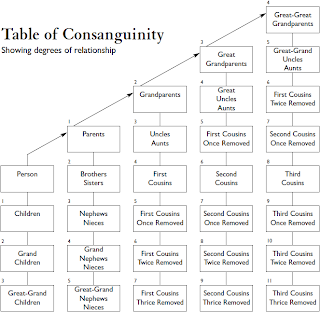 3. Civilizational accomplishment. The shaded areas indicate the incidence of people whom Charles Murray terms "significant individuals," who discovered or invented 98% of the artifacts and processes of modern civilization. They were all men, by the way. However, the map also includes the Hajnal lines, which demarcate the area of lower nuptiality centered in Europe (lower total fertility rates and higher minorities of women who marry later or remain single). 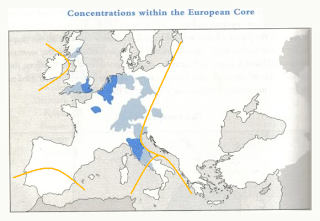 Anonymous said…
You do realize there is absolutely nothing to be learned from the implied correlations here?
September 30, 2013 at 4:16 PM

Unknown said…
You sound like the same poster I banned from my blog for the same ignorant comments.
September 30, 2013 at 4:19 PM

alexis said…
The bottom right of map 2 explains a lot about why some political systems don't cross the desert.
September 30, 2013 at 8:45 PM

The Anti-Gnostic said…
I should have attributed to Bob and HBD Chick, but got input from some other sources as well. In any event, they certainly aren't the only two noticing this.
October 1, 2013 at 8:40 AM

alexis said…
I've brought up the problem of trying to establish republican govt, the whole issue of citizenship, and problems with nepotism in tribal, clan based societies before to my kids. I think the first time that I did it was when one of my students eight or nine years ago asked, "What's the problem over there, Mr. ___?" My answer, "Well, Lamarcus, over sixty percent of the population is married to a second cousin or closer. Let's explore how that can be a problem in a functioning republic."
October 1, 2013 at 12:33 PM

Unknown said…
I never say anything if things aren't attributed, considering how much I've taken from others then completely forgotten who I got it from. Besides, ideas should be free, and the more they are disseminated and discussed, the better it is. Unfortunately, some try to shut the discussion down by saying the ideas are invalid, such as those who do not understand the difference between correlation and causation, or a hypothesis and a theory.
October 6, 2013 at 9:35 AM

The Anti-Gnostic said…
Map 1 was suggested to me by someone who thinks the research shows more eastern spread for Neanderthal. I think Map 3 was Wikipedia. The additional factor in #3 is the Hajnal lines. I think that's actually demarcating K-selection versus r-selection, and not lower nuptiality per se.
October 7, 2013 at 2:00 PM

Anonymous said…
This is stupid. Consanguinity is lower among Western European countries simply because these are colonial powers, with a booming international trade which allowed the creation of many mixed families. The Middle Eastern powers such as Turkey never had such a luxury. The silk and spice routes provided no permanent population exchanges. Traders there simply moved to and from their native towns. Finding a partner outside your native city is expensive (you need to travel, pay housing, more expensive gifts to compensate for the lack of trust). Not to mention serfdom forcing farmers to stay in a village for their entire life. Wouldn't you marry your uncle's daughter if she was the only virgin in your 100-strong hamlet.
February 11, 2014 at 3:28 AM

The Anti-Gnostic said…
You could not be more wrong. The Middle East is, literally, the center of the World. Three enormous, distinct land masses with millions of diverse peoples converge at Turkey.

Muslim polygamy, cousin marriage and the Big Man economies they engender have been stupefying the Middle East for centuries. That's why the higher IQ Christians keep leaving.
February 11, 2014 at 11:28 AM