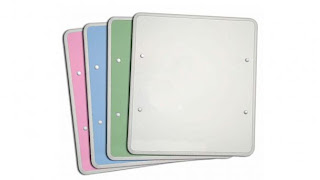 Maryland school to use bulletproof whiteboards


“It’s basically a police shield with a white board surface,” George Tunis, the founder of Hardwire LLC, explained. Hardwire, a company that has previously made military armor, began manufacturing the boards this year.

The boards are approximately four times the size of a bulletproof vest but are the same weight as normal white boards, Tunis said.

They are designed to hang on classroom doors or walls but can be used as a defensive tool by teachers, should an emergency arise.

“It’s something that would blend in but serves as a constant reminder of school safety. If a teacher ever had to fight an assailant, this would be a useful tool,” Tunis said. “If I had an intruder in my own home, I would reach for this before a gun.”

The university bought 200 whiteboards for $299 apiece and will distribute them to faculty, Robinson said.

“Having this in your hands will serve as a constant reminder of the present reality. An event like Sandy Hook,” Tunis said, referring to the massacre in Newtown, Conn., last December, ”can happen anytime, anyplace.”


Yes. Sandy Hook. Can happen anytime, anyplace. At any moment, any one of us could just go off and shoot our moms then drive to the local elementary school and start emptying clips. Anytime, anyplace.

Sandy Hook is clearly one of the most uninteresting horrific massacres ever committed. Just one of those random events that pass without further inquiry, like being struck by lightning.

Sarcasm aside, I thought there were all sorts of interesting questions from this massacre. I consider myself a pretty typical, somewhat nerdy white guy who wants to try and figure things out from his armchair. I assume there's a lot of us, given all the material out there dedicated to dissecting current events, and I assume that's because a lot of similarly inclined folks became journalists to make a living off their innate curiosity.

The popular press, not just the professional press, is full of detailed breakdowns, charts, diagrams, timelines, etc. for all sorts of natural and human disasters. But Sandy Hook is different. Nothing interesting about it at all.

This incredibly neotenous 20-year old lives with mom who's retired off her ex-husband. As soon as this happens, ex-husband is throwing suitcases in the trunk of his car and peeling out of the driveway. Brother has refused to have anything to do with the shooter or Mom for several years. Mom is the shooter's first victim, by the way.

How did he gain entry to the school? Had he been there before? Was he familiar with the place? What firearms did he use? What was his methodology? Which firearm did he prefer? Who were the easiest targets? The most difficult? Who survived and why?

Why did he still look pre-pubescent even though he was 20 years old? Why did he shoot mom and then go shoot a bunch of children at a school? What meds was he on? What was his diagnosis? Diet? Congenital conditions? What was on the computer hard drives at home? E-mails? Social media? Diaries? He had acquaintances in high school, what do they say?

But that's just me. I find all these sorts of questions interesting. If I could get paid to do it, I'd spend a month in Sandy Hook with a forensic team. I figure that might be useful data, right? That's what all those TV shows about dedicated super-cops assume, after all. Dozens of hardworking, intelligent government employees poring over crime scenes, grilling witnesses, and feeding data and analysis into giant computers.

But nobody ever bothered with any of this sort of thing in the aftermath of the Sandy Hook massacre. No journalists, no government forensic teams. No CDC with its recently-discovered mandate on 'violence.' Just a really, really un-interesting massacre of 20 children and 7 adults. It looks like all we're going to get out of this is the whiteboard shields.
Email Post
Labels: culture the doom loop

SFG said…
Your implication, which I kind of believe, is that someone knows something that'll make the powers that be look bad. He was on Ritalin and the company that makes it is paying off the reporters? Any ideas?
August 18, 2013 at 10:36 AM

The Anti-Gnostic said…
I don't think it's an active conspiracy. I think people just cultivate a profound incuriousness these days.

Journalists have decided guns are the problem, so that's as far as they go. When it turned out these were mom's guns, the next logical line of inquiry would be 1) the relationship between this single mother and her 20-year old child-man and 2) the fact of a 20-year old child-man. That's when the journalists stopped asking questions.

Law enforcement is really more reactive. They are intensely interested in weapons and tactics but from their perspective they aren't paid to prevent crimes. And, like most of us, they just want to get the kids thru college and coast to retirement.
August 19, 2013 at 5:41 AM

Anonymous said…
Nothing to see here, just hand over the guns: Chuck Schumer