I'm seeing a lot of anti-American sentiment these days. 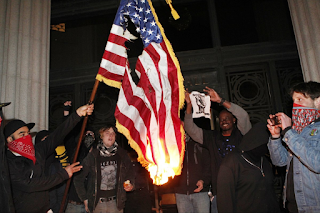 Of course, Marxists with pseudo degrees in critical theory being anti-American is old news. It is the ultimate irony that such people exist only in societies with the surplus wealth generated by free markets and well-defined property rights. In an actual Marxist country of course, you aren't allowed to protest the civil order or burn its flag.

No, what I'm seeing more and finding far more compelling is this kind of anti-American sentiment:*

[EW]:  "I contend that to be able to "keep the Republic", to paraphrase Franklin, one would first and foremost need to learn about how it was that we (the US of A) got here and where the culture that declared all men equal came from."

[ray]:  yep and you do not know how you got here, so how can you know where to go?

the concept of Equality (and particularly that God created "all men equal") came from the Enlightenment, as did the modern concept of Liberty, which offered the "freedoms" that you cite

if She doesnt think you are worthy of her Civil Rights anymore (hello males and white people) then guess what?

those "rights" and "freedoms" go poof, and you are told you are subject to the Will of the People, tough luck asshole

well fuck that, fuck The People, and fuck that skank Libertas

five minutes of observation in the real world proves that all men are NOT created equal, except that each has an opportunity to seek God

aside from that, they are decidedy UNEQUAL, unless joe biden and EW are interchangeable parts? heh

as for WOMEN being "equal" to men (actually, in practice, supreme over men) it's unbiblical as well as a joke, but hey that's the Way of Libertas, first the Grrls are liberated and purt quick they rule the "republics" that are founded on, uh, oh yeah Equality!

Liberty, egalitarianism, equalitarianism and the "priciples" of the system you defend, EW, all stem from Enlightenment concepts and the ideo-political underpinnings of the Enlightenment (that later formed the "democracies")

the masonic fraternities (and their albigensian, cathari, gnostic, and hermetic forbears) have always been led and controlled by satan, and by his demons-of-the-mind

Franklin was a high-ranking mason, and the chief architect of the shaping of the Enlightenment and its euro-french radicals (jacobins, mostly) into the new "republics" of france and the u.s.

the fundamental "all are created Equal" phrase that underpins amerika and all the demonocracies was ALWAYS intended to lead the world EXACTLY to the anti-Christ, totalitarian "governments" and systems that the west now writhes under, whose chief weapon of and iniquity and persecution is your beloved Equality, so vaunted and treasured by conservative americans who dont even understand what it means . . . except continuance of comfy lives under its avaricious tyrannies.

* The excerpt is a comment to a thread at Elusive Wapiti.

I'm feeling pretty anti-American myself these days. After all, the US of A makes it clear that the Anglo-European and Christian stock whose forebears built a civilization out of wilderness in the 1700's have no more compelling claim to the place than the Pakistani Muslim who arrived by plane yesterday. No amount of wealth any white, straight male acquires was ever earned but on the backs of the perennial victim class (and, therefore, subject to redistribution in the name of social justice). The US military attaches far more importance to the borders of Israel, the Sunni caliphates, and the European social democracies than the borders of the US and its taxpayers.

From the beginning, the US set about defining itself ideologically, a true novus ordo seclorum, as opposed to an ethnic offshoot of its mother country. So really, no other outcome than the current democratic swamp was ever possible. The US is truly a Masonic, not a Christian or an English nation.

Scotsman said…
Yawn. That comment you posted is the typical numb-headed tradcat critique of the modern world. I've been reading it for years, it loses it's effect after about the hundredth time
June 5, 2013 at 8:21 PM

Scotsman said…
One thing that I the tradcats miss is that a country isn't just the sum of the flaws of our ancestors, but their good traits too, and I think they tend to miss the forest from the trees sometimes. I am extremely proud to be a descendant of those early pioneers.

But I agree with the sentiment somewhat. It is frustrating, and even maddening, that a guy whos ancestors have been here for 400 years is less important than whatever neo-American the cheap labor lobby can import.
June 5, 2013 at 8:34 PM

The Anti-Gnostic said…
1. Catholic intelligentsia have doubled down on social democracy and globalism in a bid to regain their former influence with the State. I wouldn't worry about Catholic reactionaries at this point.

2. There was substantial divergence of opinion among the founding stock over the character of the new nation. The centralizers won.

Unknown said…
Secret Mysteries of America's Beginning. Watch it. Of course, America is little different than any other Western country in the last 400 years except purpose. Division of Labor even amongst nations.
June 11, 2013 at 8:54 PM

Bird of Paradise said…
Notice the jerks hiding their faces with bandanas Just would,t you like to turn a fire hose on these jerks?
June 12, 2017 at 5:08 PM