A Former Taliban From Afghanistan is Baptized at Mount Athos


"The sea was pitch black, it was a moonless night in the winter and very windy. We did not know how to swim. The waves looked like mountains to us. Somewhere in the distance a red light was flashing. The boat was like a nutshell in the waves. I soon realized that the journey to paradise was neither near nor easy. After about ten hours we came to the steep coast with rocks. We were in despair because we did not know if we would be able to climb it, it was so sharp. Eventually we climbed and came to an unpaved road. Before long we came to an elderly woman in black with a head-covering - we thought she was a Muslim - and with a child. My friend spoke a little English, but she nothing. With hand signals she showed us the way to a paved road and gave us a few coins, which we knew was all she had, in order to take the bus into the city. We arrived at the port and took the first ferry to Piraeus. At the door they caught us. After three months in a small reception center for immigrants that had many people like us, they gave us a map and we drove to Athens. I learned Greek and worked various jobs until I found a regular job with a company that placed solar panels. They payed me well, they wrote me up with the Social Insurance Institute, and I did my papers to receive political asylum. I worked for the same company in Athens for six years. All these years after work I would go to the outside of the churches in the beginning - something was pulling me there - and afterwards I began to enter within. I would become calm. As my Greek was getting better, I wanted to know more about Christ. I found a New Testament, however it was in a language I did not understand [Koine Greek]. Eventually I found a blue one in the Greek I had learned. I began to read it. I decided that I wanted to become a Christian. I left Athens when the company closed and went to the provinces to find various rural jobs. Eventually I found a small basement apartment in the city nearby. It had a beach. I like the beaches very much in Greece. Shortly before Pascha in 2013, I decided to ask to become a Christian."

On Wednesday June 5th, in the evening, on Mid-Pentecost according to the Old Calendar, on the balcony of the Athonite Cell of Marouda over Karyes, looking towards the Skete of Saint Andrew and the endless blue Aegean, the same sea he crossed one night from the opposite direction, under a beautiful sky and brilliant sun, Ahmed became a Christian.

He took the name Alexander. 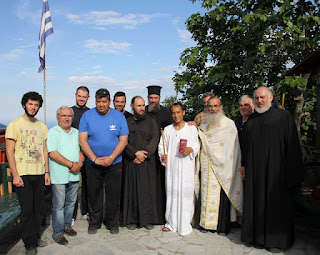 God be thanked, and may His servant Alexander enjoy many years in his adopted home.
Email Post
Labels: immigration Orthodoxy