Isn't this kind of a big deal? 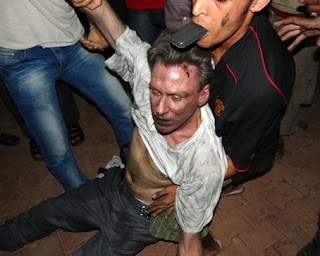 Historically, I thought when your ambassador gets shot in the head and dragged into the street in front of a picture-taking rabble, there had to be some pretty serious grovelling unless you wanted a few cannonballs lobbed at your border towns. So far, this is apparently all the Barack Hussein administration can muster in the way of outrage:


Tommy Vietor, a spokesman for the National Security Council, said "it would be premature to ascribe any motive to this reprehensible act," but other U.S. officials said they couldn't rule out the possibility of a link to al-Liby's death or the Sept. 11 anniversary, saying the attack was too sophisticated to have been spontaneous...

"While the United States rejects efforts to denigrate the religious beliefs of others, we must all unequivocally oppose the kind of senseless violence that took the lives of these public servants," Obama said in a statement.

"We never have been, and we never will be, run off, period," Biden said at a campaign event in Dayton, Ohio. "That's not who we are."

Secretary of State Hillary Clinton said Wednesday that the attack "should shock the people of all faiths around the world."

Never fear America, with these gimlet-eyed practitioners of realpolitik at the helm!

The media, for its part, doesn't seem to view this as much of a game-changer, other than to ponder the irreparable damage to the Romney campaign for their reaction to Libyan nationals executing the US's top emissary in his own (apparently unguarded) consulate.

The background of course is a long history of US meddling in places it doesn't understand and does not belong, and a film made by an ethnic group with a history of militant grievances against Islam (whom we have allowed to settle here in substantial numbers, along with Libyans).

The US has sent gunboats to the Libyan coast, doubtless to support troops in another planned foreign occupation. Of course, foreign aid will not be cut off, Libyans will not be deported, and well-intended, naive and muddled bureaucrats will continue to be assigned to Libya.

"The State has suddenly and quietly gone mad. It is talking nonsense and it can't stop." --G. K. Chesterton

UPDATE: no sympathy from the Russians:


Yevgeny Y. Satanovsky, president of the Institute of the Middle East in Moscow, said American leaders should not expect “one word of sympathy” from their Russian counterparts.

“It is a tragedy to the family of the poor ambassador, but his blood is on the hands of Hillary Clinton personally and Barack Obama personally,” Mr. Satanovsky said. He said Russian warnings against intervention in the Middle East came from the bitter experience of the Soviets in Afghanistan.

“You are the Soviet Union now, guys, and you pay the price,” he said. “You are trying to distribute democracy the way we tried to distribute socialism. You do it the Western way. They hate both.” He said dictators were preferable to the constellation of armed forces that emerges when they are unseated.

“They lynched Qaddafi—do you really think they will be thankful to you?” he said. “They use stupid white people from a big rich and stupid country which they really hate.”

NeoBasher said…
The ambassador, "ally of the Libyan people", was "suffocated", which is I think is a polite media code for sodomized, which means the US only got what was coming to it. Seeing how Gaddafi had what looked breadknife shoved up his pooper by the "freedom lovers".

toots said…
You make some good, sane comments except for the Jew bash. Every ethnic group has a long history of animosity with Islam, except Eskimos I suppose.

The Anti-Gnostic said…
You make some good, sane comments except for the Jew bash.

The more salient point is that we have invited two strongly tribalist groups with competing claims to Palestine to our shores. Inevitably, their dispute will spill over to here, and on 9/11/2001, it did.

toots said…
The Jews were the first group Mohammed massacred. He killed all the Jewish men in Medina.

The Anti-Gnostic said…
Sounds like a good argument for keeping them over there and us over here.
September 14, 2012 at 8:14 PM

toots said…
I don't understand your argument. There are no Jews in India. I lived there. Muslim violence is rampant. Its never reported unless something big happens like the Mumbai jihad a couple of years ago. So, even if there were no Jews in the West we would still have the same problems with Islam. That is my argument.
September 15, 2012 at 9:39 AM

The Anti-Gnostic said…
So, even if there were no Jews in the West we would still have the same problems with Islam.

That is not really the point I was making but,

Jews have made enormous contributions to American culture, but their endgame is apparently 'let's you and him fight,' and they're not the only ones pulling this crap.
September 15, 2012 at 12:04 PM

toots said…
But, you can't have muslims in the West. Even if there were no Jews here. Not unless you like dhimmitude. Or you enjoy the pleasures of endless revenge in a backward pre-modern hellhole.

I still like the rest of your article. It is a big deal.

If Stevens were a career diplomat there's a 50/50 chance he was conservative. They tend not to assign political appointees to hellholes. More like Paris or Stockholm for them. He probably volunteered for the extra pay. Probably double. I don't know his politics but I know a bit about how the foreign service works.

If the admin isn't protecting its people, or allowing them to defend themselves this could blow up in Obama's face. If someone wanted to investigate.
September 15, 2012 at 5:15 PM