I rarely watch TV, but for various reasons I was present when the Golden Globe awards were broadcast last night. Harrison Ford was the presenter for best drama. Mr. Ford is 70 years old. I am 48, and watched the great Mr. Ford in Star Wars, Blade Runner and the Indiana Jones movies.

In 2010, he was in production for 'Cowboys and Aliens.' Here is a scene from the final cut and wrap for that film: 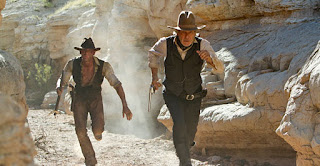 The picture at the top of this entry, and the following observations from the linked entry, are of Mr. Ford on January 15, 2012:

Both Indiana Jones and Willie Scott were at the Golden Globes last night. From the look on Harrison Ford's face, I'm assuming there's only a 30 percent chance that he would remember Kate Capshaw. Actually, by the look on Harrison's face, I would bet money that Ewan McGregor could have convinced Ford that they were in "Star Wars" together.

Harrison Ford presented Best Picture Drama and, literally, he could have Tweeted his presentation. Ford said 17 words, which translated into 97 characters. He could have even added a #goldenglobes and a #its420somewhere hashtag.

I have a number of family members at or around Harrison Ford's age, and his speech and manner were what I would expect of a comparatively much older person. In fact, this very weekend my parish hosted the redoubtable Bishop Antoun, and he presided over lengthy services and gave a fiery sermon after the Liturgy, telling us why we needed more attendance at Matins, Vespers and the minor Feasts. Then his Grace attended the banquet in his honor, singing hymns as he walked into the social hall and standing to greet and converse with the numerous people who came to his table during the meal. To all appearances, he will be lecturing us on Orthodox practice for at least the next ten years.

Geriatric symptoms can appear quite suddenly and mercilessly, even in people with a great deal of wealth and resources at their disposal.

airtommy said…
Googling this topic, I noticed some people suggesting that Ford is actually stoned during these appearances, rather than senile.
January 24, 2012 at 9:39 PM

The Anti-Gnostic said…
Your comment spurred me to google the topic as well. He and his wife look great in photos.