The Prime Minister of Australia, Julia Gillard, apparently had a run-in with aboriginal protestors today. The video is here.

Aesthetically, Ms. Gillard is unattractive and awkward, never married and infertile at this point. I presume she got the position based on sheer competence, and it would be considered terribly sexist of me to judge her by any other standard.

The job of Australian prime minister strikes me as pretty posh, but then a mob of Aboriginals starts banging on the windows of the exclusive restaurant where you're speaking. So then Prime Minister Gillard must flee... 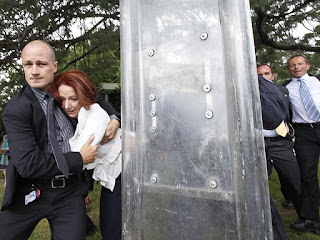 In this picture, you see the dumb bitch has lost her shoe: 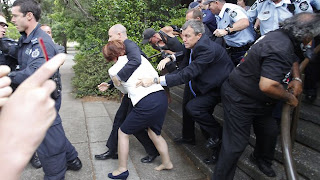 I use the term "dumb bitch" advisedly, because that's exactly what would pop into a man's head when the shit is hitting the fan and we have to move NOW only to find that some implement designed for form rather than function is flopping off, slowing the woman down and making her more prone to injury.

This underscores an earlier point of mine: that weaker members of Western society have to rely on predominantly white men with unfashionable attitudes to protect them, or even to help them down some steps. 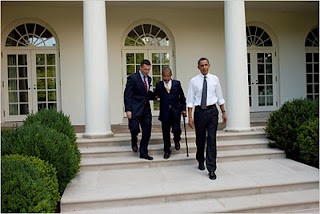 Obviously we do women a great disservice by forcing them into roles for which they are so manifestly unsuited, like being a riot cop. This is pure gnosticism: that the biological gender differences can be transcended through the force of correct, feminist ideology. 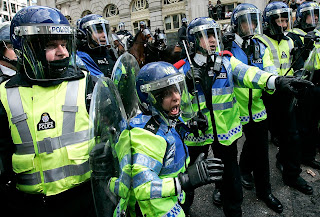 Again, the feminized social democratic elite relies on men with the capacity to do ugly things, and the corresponding reactionary attitudes, to protect them from barbarism. Then they exploit their cocooned existence by demeaning the very men who keep barbarism at bay, mocking their values and blaming them for every social ill.

When such men decide that the current elite are no longer worth the pay to protect them, the job of government official will become a lot less attractive for women like Ms. Gillard. In fact, even with a Roman phalanx of men still around and willing to crack skulls for her sake, she doesn't seem to be enjoying her job very much.
Email Post
Labels: angry white guys feminism gnosticism political correctness makes you stupid

RR said…
"Again, the feminized social democratic elite relies on men with the capacity to do ugly things, and the corresponding reactionary attitudes, to protect them from barbarism. Then they exploit their cocooned existence by demeaning the very men who keep barbarism at bay, mocking their values and blaming them for every social ill."

I think if you put a time-line on Gillard's palace coup, you'll see that Rudd made some powerful people very unhappy. The main Gillard backers are themselves the happy front-men for the same lobby. She did not get the job by dint of her own Lady Macbethian talents, formidable though they are. (And they are. I expect her to be a real fixture for the next dark years).

Also, I when I see the First Man, the word that comes to mind is "beard". I really think the Canberra press-gallery is deliberately quiet on this sensitive issue.
February 3, 2012 at 9:55 PM

Anonymous said…
Off topic: Anything LVMI puts up about Ron Paul drawns the neo-cons like shit to a blanket. My, that terrible man has been speaking, yes, speaking to those who dare to think that those of European stock have any right to identity. The usual suspects...
http://mises.org/daily/5853/Ron-Paul-on-Peace
February 3, 2012 at 10:51 PM