It takes a platonic village 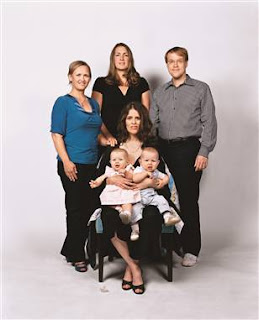 Where to start? How about with this creature's pudgy, whipped, practically invisible husband-thing, Mr. Turkey Baster, slouching around in the background. She spends his money on a series of IVF treatments, then decides on surrogacy for not one but two eggs and not one but two surrogate carriers/wet nurses. She also apparently requires the services of some person called a doula and a nanny. Then she refers to herself as a 'mother.'

I was 41 when, after a gazillion not-quite-right relationships and a broken engagement, I met Michael, the man I would marry. He was five years younger; socially, it didn’t seem like an important age difference, but in terms of fertility, it turned out to be.


So, two decades wasting her sexual market value on "a gazillion" different men and this is it, the crown jewel, the piece de la resistance: Beta Tubby-Hubby.

Knowing that, I was still taken aback by how discouraging one adoption agency was about our prospects for “competing” against other couples. “Most birth mothers do prefer younger women,” the woman informed me. “But you’ll get a letter from your doctor, certifying you are in excellent health for the social worker anyway.”

“Right,” I said, thinking about the arthritic condition that caused the chronic pain I had been struggling with for many years.

But I knew Michael and I were a great couple — I had pined so long for the elusive feeling of rightness, and now that I finally had it, I was damned if I was going to let biology unbless us. And I knew if we let biology become Mother Nature, we actually would be damned.


Yes lady, that's correct. Nature has already determined you would be an unfit mother.

The nurse urged me to stick with it. “We don’t want you to feel like you can’t nurse,” she said. I suddenly felt cross. Did she really think I couldn’t handle the reality that my body was not producing milk after it didn’t give birth to my baby? I knew she was trying to be supportive, but her concern made me feel diminished, as if she thought the truth of my infertility were unbearable (yet so easily disguised with plastic tubing). I looked down at my breasts, and they looked awfully small, whereas Melissa’s were enormous, dripping with fecundity, like a relic of a fertility goddess. I ditched the tube.

I felt similarly when Violet was born five days later and another perfectly nice nurse presented us with the hospital’s certificate to commemorate her birth, on which there was no mention of Fie. It wasn’t a legal birth certificate (our lawyer obtained a “prebirth judgment order,” which meant that a legal birth certificate would come in the mail, naming us as the parents) but a sentimental keepsake with a blank space for the baby’s name followed by the words “born to” over a pair of baby footprints. When the nurse came back in, I insisted she reprint it and include all three of our names. Just at that moment, Fie knocked on the door from her adjoining room to complain about her birth certificate, which had been doctored just the opposite way, to exclude mention of us.

“I was just trying to make everyone feel good,” the nurse said, backing toward the door, flustered.

“We feel good about the truth,” I said firmly. And I wanted people to reinforce — not undermine — that feeling.

I once felt a prick of an unpleasant emotion. It was the week the Fairy Goddonor came to Portland for the egg retrieval. Over tapas one night, I watched her and Michael laughing and suddenly felt unhappy. I poured myself more wine, but instead of dispelling the feelings, it made me feel more alone. “You were so quiet at dinner,” Michael said as we got into the car. He turned to look at me. “Are you not feeling well?”

“Is it weird that you’re having babies with her instead of me?”

The conversation dissolved into laughter. That was the thing about our conception: there were too many players to be jealous of any one.

The Anti-Gnostic said…
Indeed. I never thought I'd see the day when people thought coitus was overrated.
January 6, 2011 at 8:15 AM