I don't understand the uproar over this photo by AP reporter Jenny Jacobson: 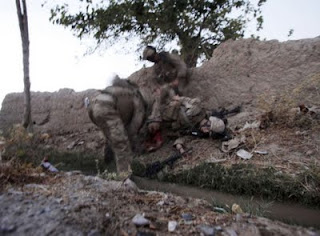 The main objection I read in various comments was that the photographer should have respected the privacy of LCpl. Bernard and his family. I am not sure where such arguments come from. LCpl. Bernard, God rest his soul, was a public employee hit by enemy fire in a war funded by taxpayers. I think he and his family can legitimately insist he not be photographed in the trauma unit after all of his clothes have been cut off. But short of that, the people funding the war and voting to approve its continuance should be able to calculate the cost from, among other sources, the visual depiction of young men reduced to bleeding, spastic flesh. There is a lot further that such photographs can go, for that matter.

One particularly deluded commenter I read was outraged that Joshua's family had been robbed of any belief that their son had died quickly and painlessly. Folks, weep instead for the fact that this son of America died without offspring, and weep also over his last moments of appalled shock that his young life was being snuffed out.

Another common sentiment was that the photographer should have deferred to the notion that LCpl. Bernard was "fighting for our freedom." At best, one can say he died so that Islamic militants trained in Afghanistan wouldn't make their way over here. Now, the objective merits of that statement aside, why haven't we stopped at a few training bases in Afghanistan that were destroyed eight years ago?

Isn't the real source of the problem the Open Society's insistence that, as it chooses sides in overseas inter-tribal conflicts, it simultaneously welcomes the protagonists from both sides over here?

And forbids its members from carrying the most basic tools for self-defense on to airplanes?

And will sue folks like the Bernard family into the dirt if they reject the premises of the Open Society?

This gets back to my question of last month: when does the Christian, homeschooling Bernard family realize they are sending their sons to die for an entity that hates them? And what happens then?

Christ our eternal King and God, You have destroyed death and the devil by Your Cross and have restored man to life by Your Resurrection. Give rest O Lord to the soul of Your servant Joshua who has fallen asleep, in Your Kingdom where there is no pain, sorrow or suffering. In Your goodness and love for all men, pardon all the sins he has committed in thought, word or deed, for there is no man or woman who lives and sins not. You only are without sin.

For You are the Resurrection, the Life, and Repose of Your servant Joshua, departed this life O Christ our God; and to You we send up glory with Your Eternal Father and Your All-holy, Good and Life-creating Spirit, now and forever and unto ages of ages. Amen.
Email Post
Labels: afghanistan anglo-america politics war on terror

MWT said…
I basiclly agree with you, but the family explicitly asked that photo not be published.
September 20, 2009 at 3:24 PM

The Anti-Gnostic said…
Assuming such a right, and I do not, I would say it was waived by Joshua's status as a public employee.
September 30, 2009 at 12:39 AM